The next 10 years could be the decade of hemp if all the pieces fall into place. And with the historic bipartisan passing of the 2018 Farm Bill, one of the biggest pieces is now in place.

Thanks to new provisions in the Farm Bill, what was once illegal to grow in all but experimental test plots is now allowed to be grown under federal laws and has the opportunity to be certified as USDA Organic. The 2018 Farm Bill removes hemp from the federal list of controlled substances if it meets certain requirements.

This means that farmers in search of a new crop to rotate into farming plans can consider hemp, as long as growing it is not prohibited by state law. In addition, legally grown American hemp can be sold across state lines, and U.S. states may not block the transportation or shipment of hemp through their states.

For a crop that cleans soil of minerals and pollutants and that has generated significant public interest for potential widespread uses ranging from fiber materials to nutritional supplements, the choice to cultivate hemp might just be a no-brainer for family-scale farmers.

Hemp Then and Now

Hemp was made illegal in the U.S. in 1937 and couldn’t be legally grown except by farmers in certain states that provided licenses for growing the crop. Before that year, hemp was a commonly grown plant. It was made into textiles and paper for over a hundred years before 1937. In fact, it was even grown by George Washington!

That’s right, our first president grew hemp. But in 1937, industry special interests, confusion with marijuana, and racially charged legislation made hemp—one of the first plants ever grown on U.S. farms—illegal to grow. Further legislation, spread over several decades, almost completely removed hemp from the landscape.

But now, some 80 years later, hemp is legal to grow again. It’s even growing right now on what was George Washington’s Mount Vernon farm.

The tide turned with the passage of the 2018 Farm Bill. It’s good timing, too. To say this last decade has been financially challenging for smaller farms would be an understatement.

Just like the millions of dollars earmarked for innovation in organic farming, the legalization of hemp is designed to help farmers throughout the country. Many farms, including smaller family farms, are struggling to turn a profit right now. But hemp farming could become an option that improves the soil, profits small- to midsize farms, and reinvigorates the greater farming community.

Farming is difficult. It has always been difficult. But for small farms owned and run by families, like the farmer-owners of our Organic Valley cooperative, the financial challenges are often much harder than birthing calves or inventing new pasture mixes for grass-fed cows. That’s why our cooperative is constantly looking for ways to innovate and support farms in times of crisis and in times of plenty. 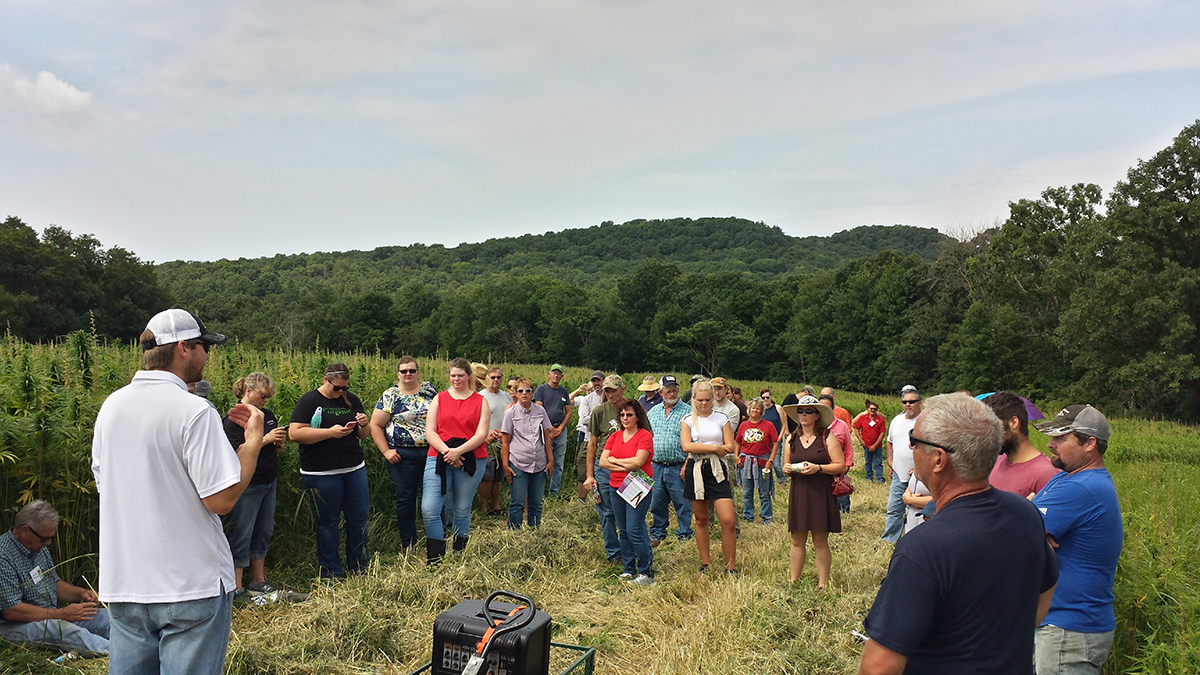 Organic Valley farmers and employees take a tour of the hemp test plots during a field walk in 2018.

Here at Organic Valley, we grew test plots of hemp through experimental efforts licensed by our state of Wisconsin. The plots grew in the healthy soil of land leased from the HoChunk Nation, in the Kickapoo Valley Reserve north of the tiny town of Rockton. We also have permits to expand these hemp-growing tests to our campus in Cashton, Wisconsin, although we have no plans to plant in 2019. 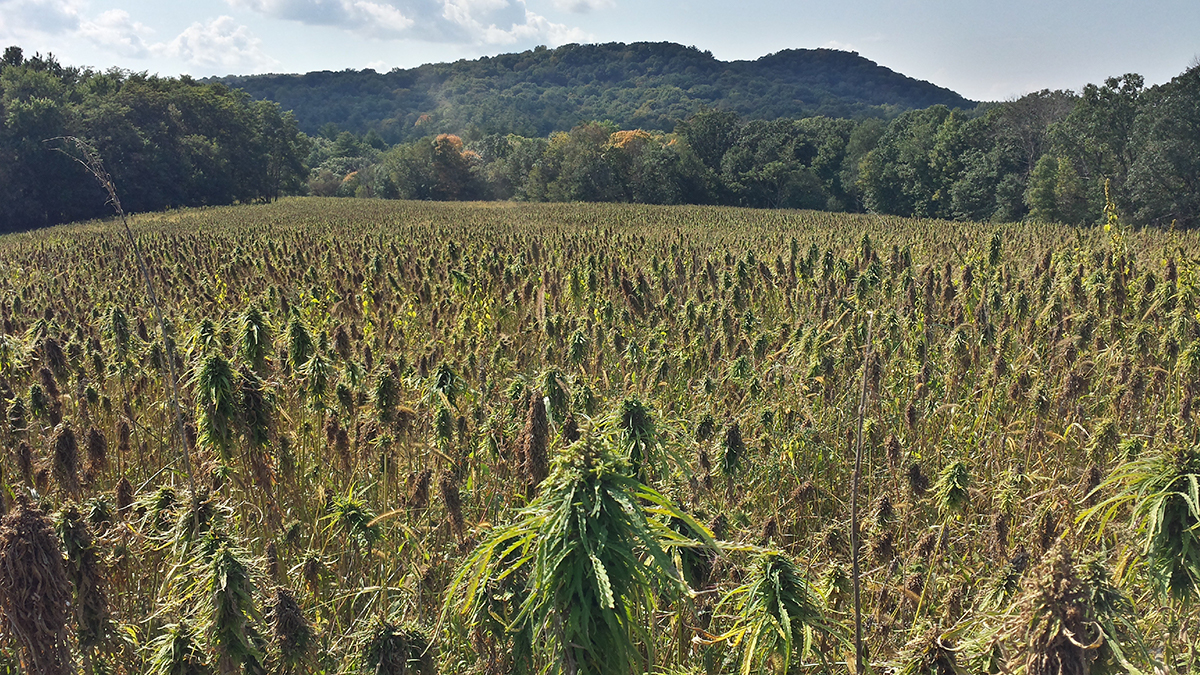 One of Organic Valley’s test plots of hemp nestled in the hills of southwest Wisconsin.

In the fall of 2018, we shared our learnings at a hemp field day attended by 75 of our employees and farmers who were eager to talk about growing hemp and excited to learn more about this emerging opportunity.

That’s where our cooperative comes in. We are learning about hemp the same way many American farmers will—through trial and error. Hemp can grow well here in southwestern Wisconsin as well as in many areas of the country with warm summers and well-drained soils, but it takes effort (and even some failure) to relearn specialized farming methods that faded away after the 1930s.

To assuage any lingering concerns, hemp, as defined by the 2018 Farm Bill, has absolutely no psychoactive effects. The misconceptions that led the same plant George Washington grew to be made illegal are just that—misconceptions. Hemp is not grown to be smoked; instead, it is grown for an impressive number of reasons. 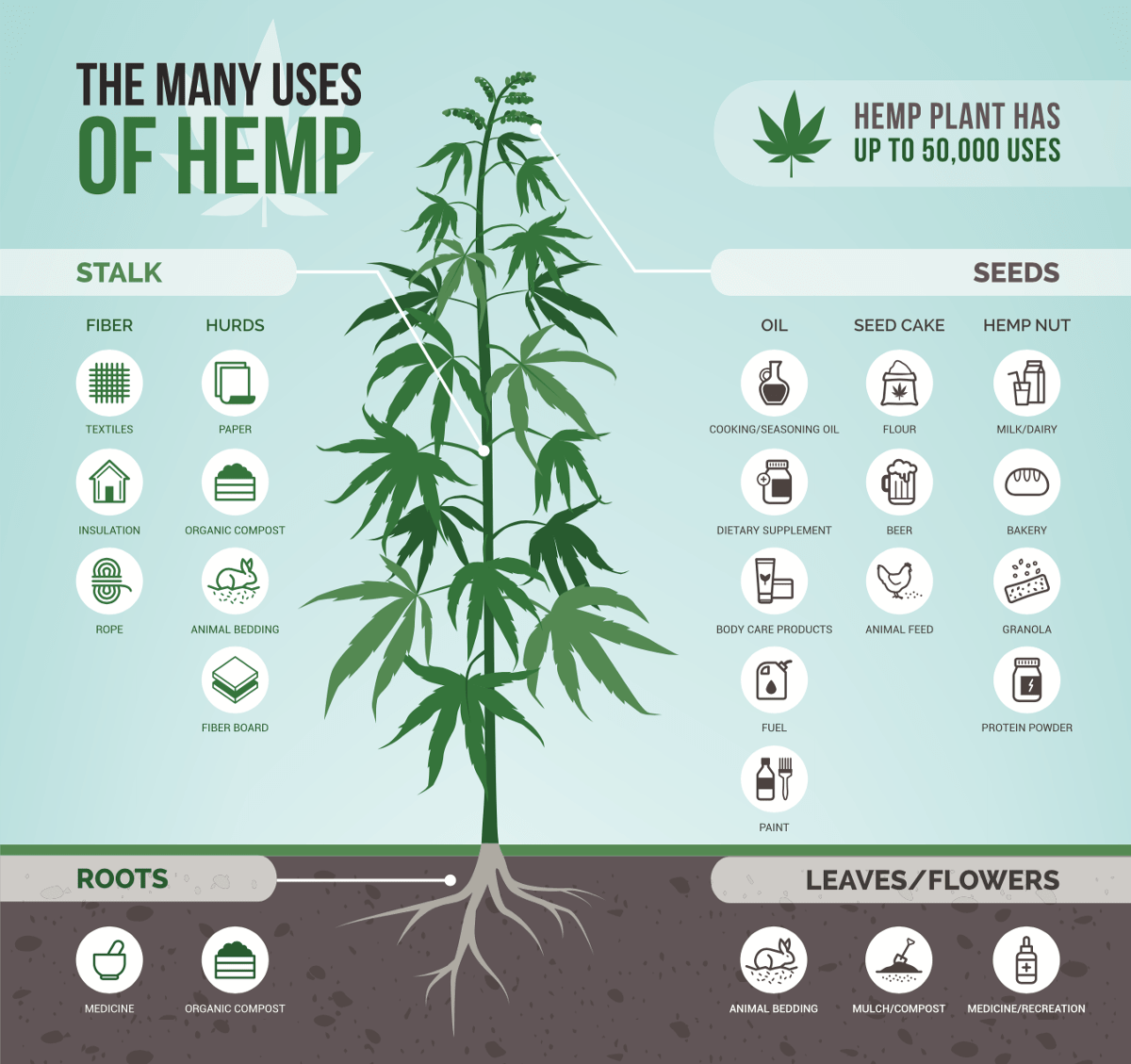 This chart from CBD Origin shows the wide range of products that can come from every part of the hemp plant.

Hemp can be made into clothing, put into food products, infused into lotions, used in homeopathy, and manufactured into a variety of materials. An especially exciting feature for farmers is that different parts of the plant are used for different purposes, which means all parts of the plant can be sold, unlike with other cash crops like corn and soy.

CBD oil used in homeopathy comes from the flowers. Certain varieties of hemp are better for CBD oil, while other varieties excel in fiber and feed production. The seeds can be used in many foods, pressed into hemp oil and even fuel, and after pressing, what’s left can be used as animal feed. The roots and leaves can be used in medicines. And the stalk is used for fiber and fashion. Farms stand to benefit from all of the value-added products that will manifest from the revival of the U.S. hemp industry.

Brands like Patagonia are already pushing hemp fashion and innovation forward. Why not look good and support hemp growth at the same time? Hemp fiber creates clothing that feels better over time and lasts longer than cotton. In fact, Levi’s jeans originally wove hemp into the American classic, and now they are going back to their hemp roots.

Sure, it’s nice to look good, but we are a cooperative of farmers focused on making healthy food. Why would we be interested in growing hemp?

Hemp could be a great addition to some farms, providing a new crop rotation or cover crop that could also provide a new income stream. While we don’t have plans to add hemp to our cooperative’s product lineup of milk, eggs, cheese, and produce, we are still excited to see research in this newly legalized field. At Organic Valley, we innovate at every level, from the pastures and crops we grow to the packaging we put on the shelf. Innovations in hemp and agriculture can lead us toward a more sustainable world.

We are constantly striving forward for our cooperative of 2,000 family farms. What makes us most excited about growing hemp in the U.S. again is the possibility for innovation. We don’t know which area the innovation will be strongest, but we are excited for the possibilities, both for farmers and for the new American-made products that will become available to us all.