There is a place at the edge of the world where the land stretches for millions of acres without an apartment complex in sight, where cows roam freely and the earth maintains its cycle with little human interruption. But when humans do show up, they do so as stewards of the land.

This place is Australia. 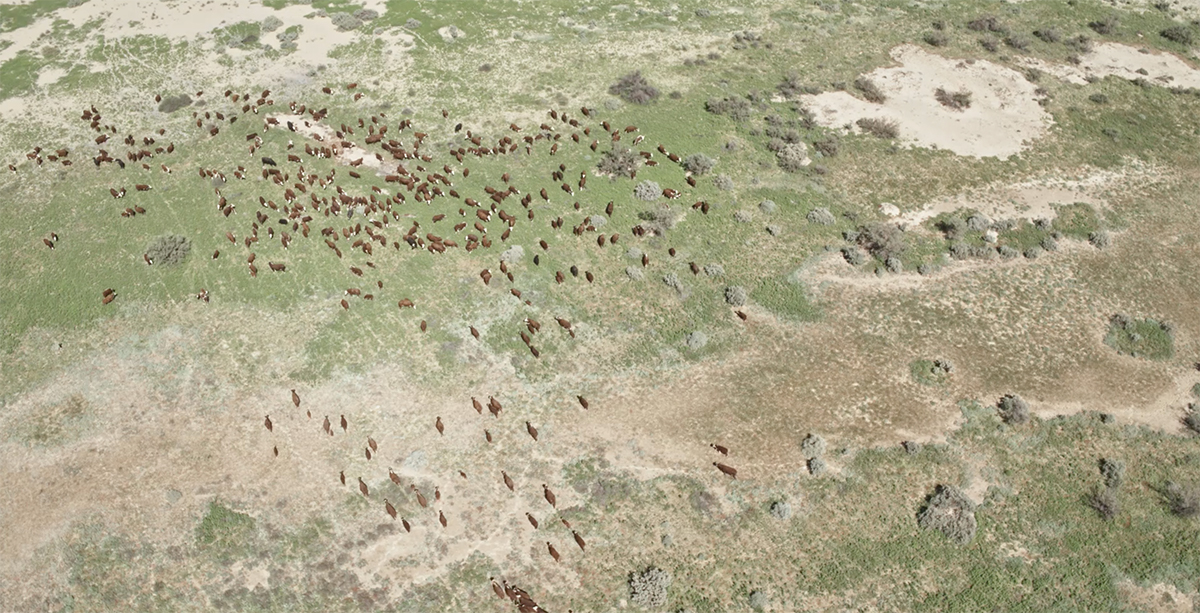 From the air, we can get a sense of how spread out a herd of cattle can get in the wide expanse of land available for grazing in Outback of Central Australia. Photo courtesy OBE Organic.

In the heart of Australia is Epsilon Station, where the Betts family cares for 500,000 acres almost 1,000 miles from Brisbane, the bustling capital of Queensland, Australia. The family stretches their domain to 1.5 million additional acres with a second ranch called Mungerannie about 300 miles down the road. In total, the family along with a few employees manage an area larger than the state of Delaware, all of it wild, untamed, and teeming with life.

And from all that life comes the grass-fed beef we turn into Mighty Organic bars, sticks, and jerky.

Here’s the mighty story of our cooperative members Graham and Sharon Betts. 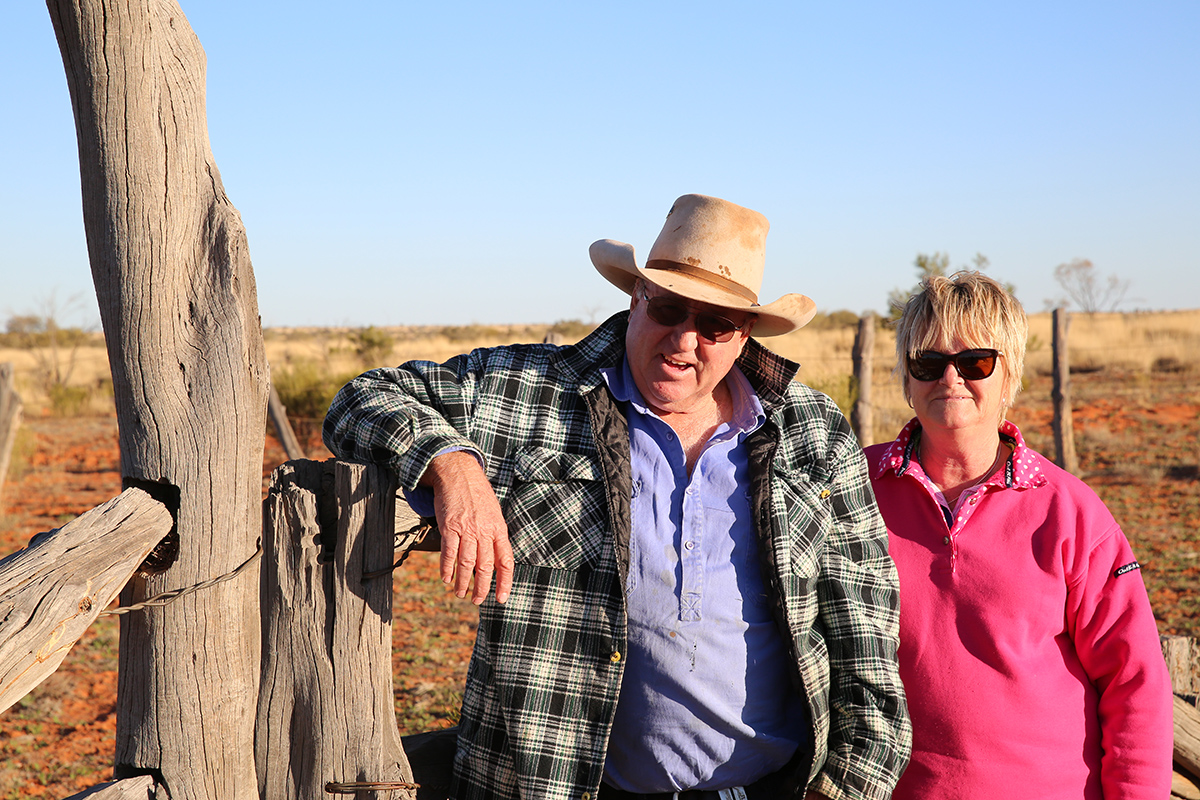 Graham and Sharon Betts out at Epsilon Station (station is what Australians call big Outback ranches).

Epsilon Station was bare paddocks stretching for hundreds of thousands of acres in 1957 when Graham Betts’ father moved there. There was no home, no humans, and no technology. There was also no confinement. No added chemicals. Just a man caring for the earth and raising some of the highest quality beef anywhere in the world.

The Betts family built a home, drilled deep into the earth for water, and set to creating a farm that grows to this day. 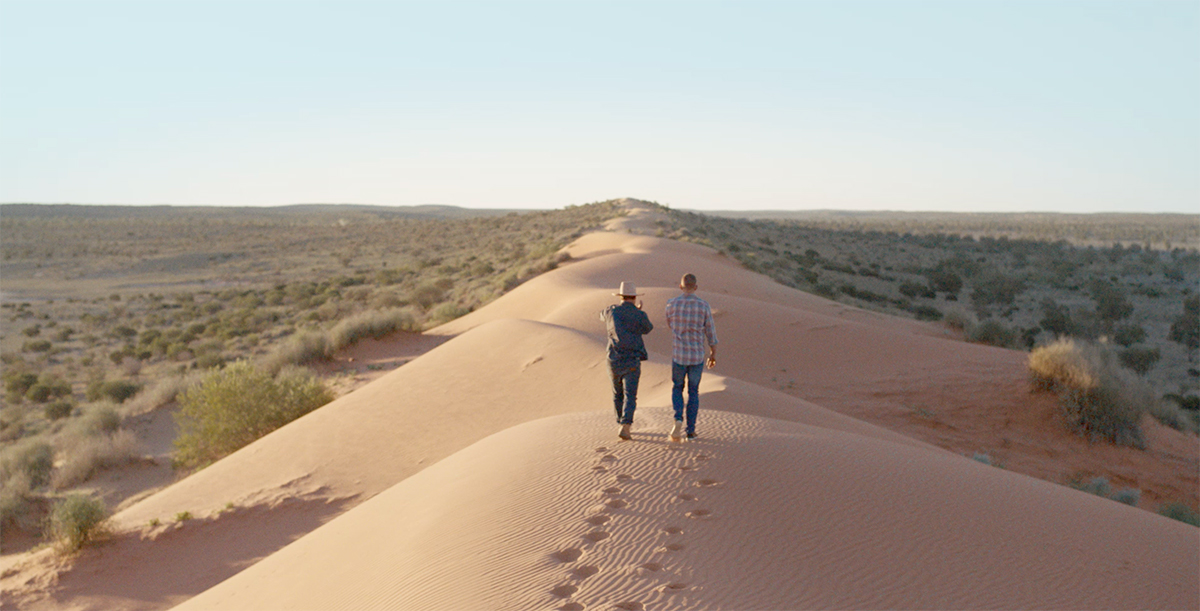 Like most properties in the Australian Outback that are too arid to support cropping and too remote to be contaminated by pollution, the Bettses’ land has been virtually untouched by chemicals since the dawn of time. It was organic before organic existed. So when OBE Organic, set up by Outback ranchers to be the first organic beef company in Australia, came knocking at their door, it was a pretty easy decision to join.

“It wasn’t like we had to make a big change,” said Sharon.

The Betts family signed on with OBE Organic and became integral to the organic food movement in Australia – so much so that Sharon is now a Director of OBE Organic. The commitment to OBE Organic meant no artificial hormones, no toxic pesticides, and no antibiotics, solidifying the practice they already believed in: letting nature take its course. 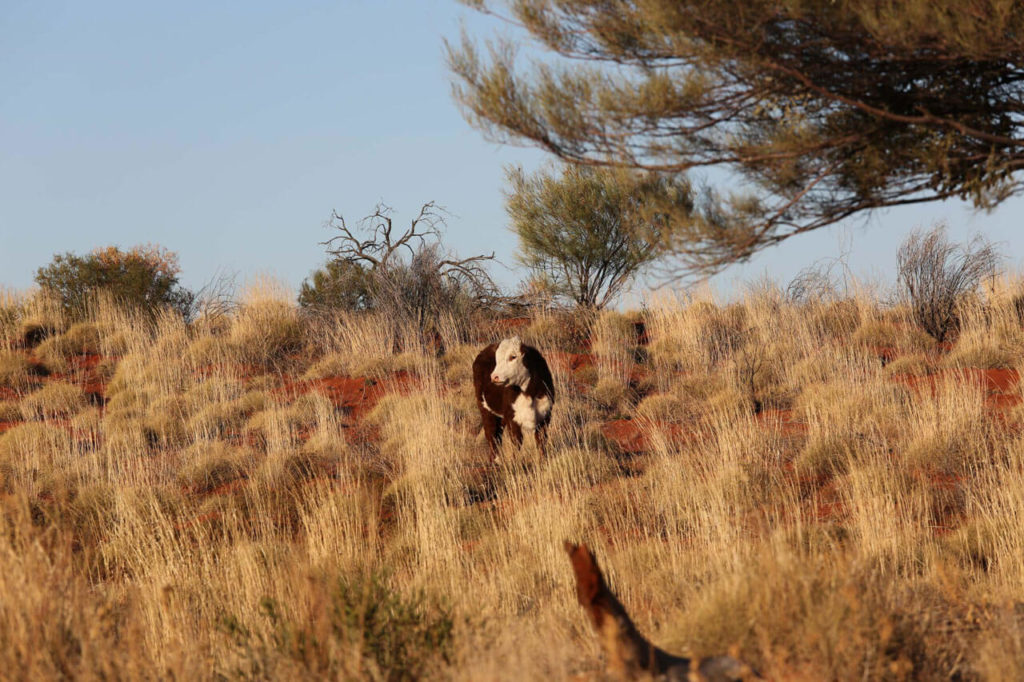 Generations of cattle roamed the sprawling hectares of the Austrailian Outback, and they were about to get even more land to browse. In 2002, Graham purchased the 1.5 million acre Mungerannie Station along the iconic (in Australia at least) Birdsville Track, which allowed them to add to their herd.

Made up of predominantly Hereford cattle, the herd is built for inland Australia, thriving on the native grasses and forages naturally growing throughout the family’s nearly 2 million acres of open land. For their 10,000 head of cattle, the math breaks down to a massive 200 acres per cow.

Living in wildlands like this gives the beef from OBE Organic a unique provenance, one that infuses the grass-fed beef with a flavor all its own. And it takes dedicated people like the Bettses to know when to move cattle in order to manage the land responsibly. 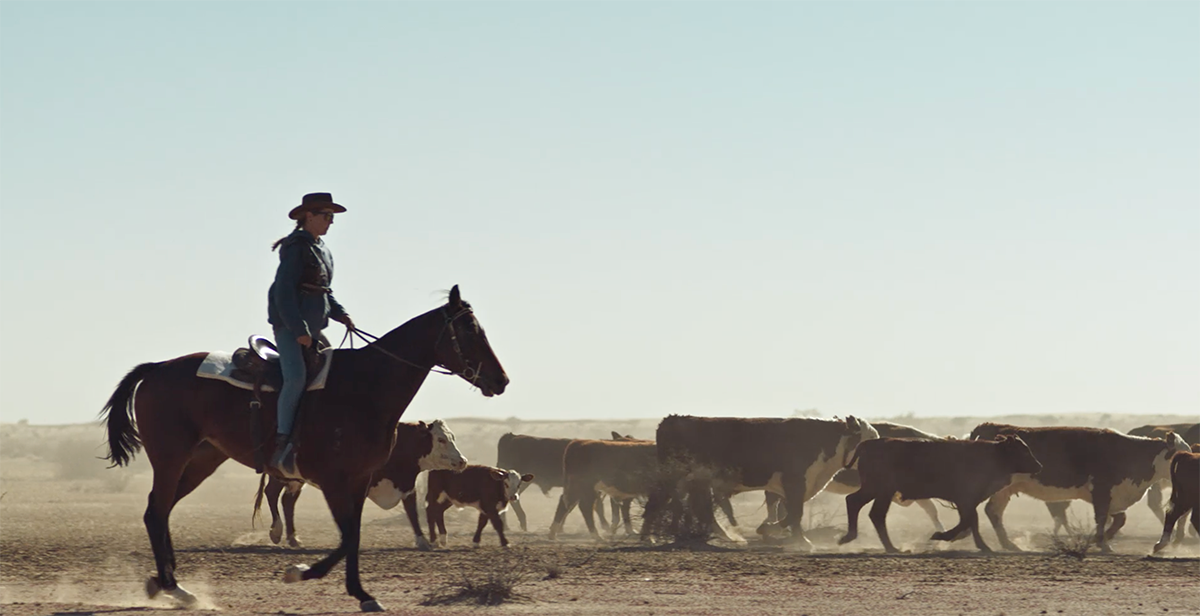 There are a few tradeoffs in this seemingly idyllic farming life. The ranch is 1,000 miles from Brisbane, and there are zero large cities between here and there, which presents obvious challenges. To put this into perspective for Americans, that’s the distance from Minneapolis to New York City, with none of the big cities in between.

It wasn’t until the early 2000s that the Betts family had any internet, and before that, phone access was only possible for 6 minutes at a time. Let’s just say there is no 2-day free shipping from Amazon Prime. Grocery and mail delivery comes once a week on Friday. Medical treatment means a doctor flying in, and boarding school is the best option for educating the next generation.

Still, the open country of Australia draws the family back to the land decade after decade.

In 2011, OBE Organic joined the U.S.-based CROPP Cooperative (better known by its brands Organic Valley, Organic Prairie and Mighty Organic) as a member, connecting the wild country of Australia to the growing good food movement in the U.S. The Betts family’s million acres would now supply grass-fed beef across the Pacific.

In fact, most of the grass-fed beef from OBE Organic ranchers is sold internationally, securing a worldwide market for sustainable, organic farming methods.

Efficiently monitoring millions of acres of wild country in the Australian Outback takes resourcefulness and innovation. The Bettses have those skills in spades.

They use a photography system to keep track of the health of the pastures; although, at times, they simply know intuitively that the land is ready for a change. “When you’ve been on the land for so long, you tend to know what the condition is without external feedback,” said Sharon.

But once you know what the land needs, how do you make it happen? How do you move thousands of cows hundreds of miles?

The Betts family has figured it out. 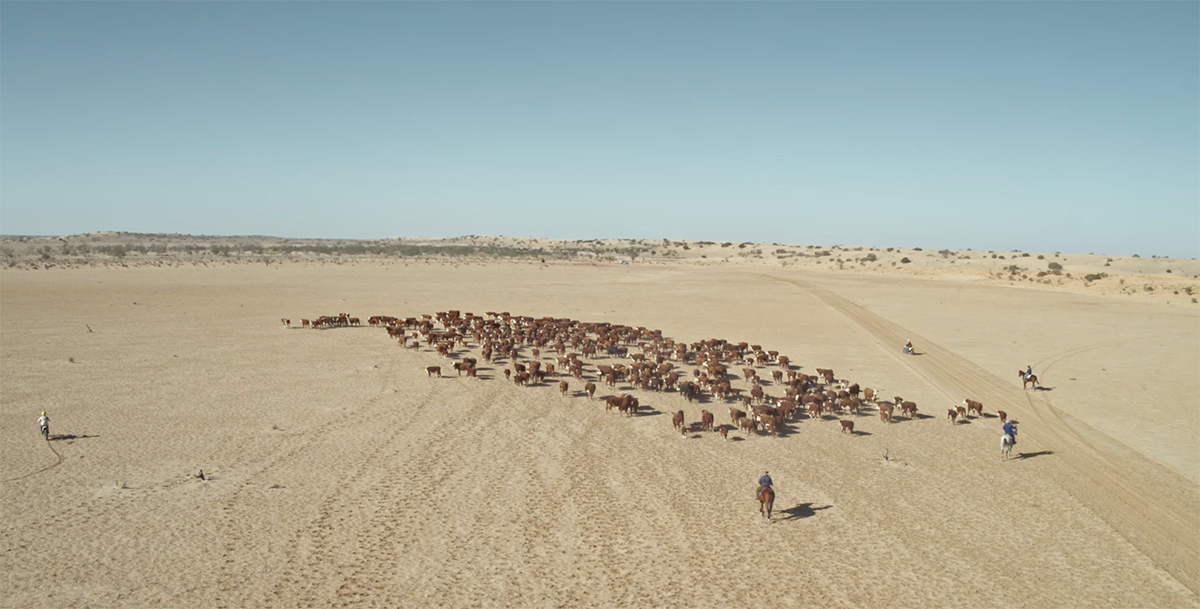 It starts with a small helicopter called a gyrocopter that they use to find the herd among thousands of acres, and it ends with a team of real cowboys (or ringers, as they’re called in Australia) riding horses, trucks and dirt bikes to corral the cattle. Then the cattle are herded or trucked to a new tract of wildlands that is ready to be grazed.

This human management helps maintain healthy soils and grasslands that could otherwise end up overgrazed if the cows were left to their own devices. 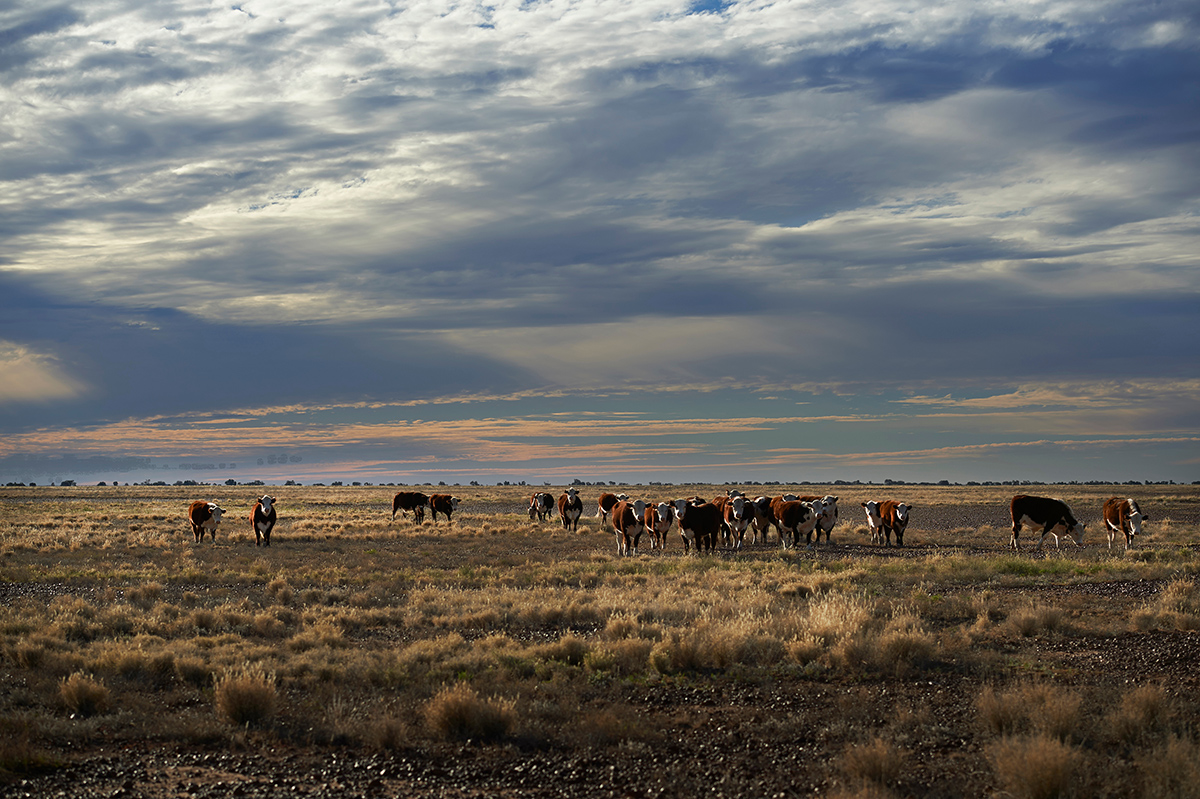 Living in this vast, beautiful and remote area can be challenging. Sacrifices of the modern are made, but the job of stewarding the land and the animals is an honorable one. It provides healthy, grassfed beef that ends up on store shelves as convenient Mighty Organic beef snacks, which give people a way to support a better world with every dollar they spend.

Moving cattle hundreds of miles and caring for such vast amounts of land is no easy task, but it’s worth it when it means healthier soils, healthier food, and a healthier Earth.

Get another view of what it’s like to live and farm in the Australian Outback with this great video by OBE Organic introducing us to the Brooks family, Australia’s first organic beef producers and who are located near -- relatively speaking -- the Betts family.