The last few days have been filled with excitement and relief as milk trucks began rolling into the driveways of organic farms that were unclear of their future. These small family farms didn’t know if they would have to sell their dairy cows or give up farming completely.

Saving small family farms is core to Organic Valley, a cooperative borne out of the farm crisis of the 1980s. When two companies decided they wouldn’t renew contracts at small organic farms, leaving them nowhere to market their milk, we reached out. We are excited to announce that 51 total farms from Vermont, New York, Maine, and New Hampshire are the newest farmers producing milk for Organic Valley. Fifteen other farms joined us earlier this year.

“It is such a joy to see the milk truck driving down the road to our milkhouse. We work hard every day to care for this land and our animals, all organic, using no toxic pesticides or antibiotics,” said Selina Rooney of Rooney Farm outside of Morristown, Vermont. “Shipping milk with Organic Valley allows our farm to stay viable, it allows us to be the caretakers of this place and produce good organic food for people.”

A milk truck pulls into the Osgood farm in Vermont.

We’re pretty darn proud to tell you Organic Valley products come from cows that get plenty of one-on-one attention, and the farmers deeply care about the earth and producing quality products. The farms that are joining us had to meet the high animal care, sustainability, pasture, and quality standards you can expect from Organic Valley.

Small family farms are often the lifeblood of a community where neighbors work hand in hand. Mom and pop shops rely on them, and the rural landscape is speckled by nature with a few farms in between. Not like big dairy, which often rearranges the landscape to put up huge sheds to house cows. Along with saving the rural landscape, there are so many reasons we can’t let family farms disappear.

We recently caught up with some of the newest Organic Valley farmers.

Cows follow George Osgood at his organic farm in Vermont.

The Osgood Family Farm in Vermont

Out of the blue, a 12-year-old boy and his dad popped their heads into the Osgood barn in Vermont one afternoon. The dad said, “I want my son to know where milk comes from” because the boy had no idea.

Dairy farms in central Vermont where George and Mary Osgood live are getting few and far between, George said. He was in the construction business for 29 years when he decided to revitalize the family farm that sat idly by for 15 years. Mary was on board but there was an ultimatum.

“Everything we buy and everything we grow is organic,” George said. “If we didn’t farm organically, we weren’t doing it.”

They are huge organic advocates for health and environmental reasons.

“If it doesn't come off the farm, we don’t eat it. Organic is knowing where food comes from,” George said.

The Osgoods walk the pasture on their Vermont farm.

They started farming and contracted with a large international conglomerate to pick up their milk. George said he was not surprised when they received the letter from the company confirming it would no longer pick up their milk. The Osgoods considered selling their dairy cows but keeping the farm and sheep, beef cows, chickens, and pigs that call it home.

When Organic Valley approached, they knew they could keep the dairy cows. “I like that Organic Valley is taking care of the little farms while Horizon wanted farms to get bigger and bigger,” George said.

There is a land grab in Vermont, he added. “The landscape is going to change drastically if we don’t take care of the small family farms.”

Thank you, Osgoods for joining Organic Valley and our mission to produce ethically sourced products that are made without the use of harsh chemicals.

The Mehuren family in Maine.

The Mehuren Farm in Maine

The Mehuren farm in Maine sits about 15 miles from the coast. The family farm goes back to the early 1800s. Glendon Mehuren’s grandparents milked cows and “who knows how many generations before that did?”

Glendon had a lot going on when he spoke to Organic Valley on the phone about his experience losing his milk market. The cows bellowed in the background while he tried to prep a pail milker for his children to take with them to the Union Fair, where they would showcase their cows.

The farm and family are the most important things in his life. Their children ages 7 to 25—Elida, Sadee, Emma, Silas, Asa, and Lena—are all involved with the farm.

They milk about 50 cows and while they were with the other dairy company for years, they were not surprised by the news.

“I hoped being with someone a while would earn you loyalty. In the end it didn’t seem as if it did,” Glendon said. “It was a relief when Organic Valley came; there was a big question of what to do moving forward. Would we bottle our own milk, transition to beef, or what the heck, go get a real job?”

At Organic Valley, we know that farming is a “real job” and a really important job, but whatever you want to call it, we are glad these farmers decided to become members of our co-op.

Rory Allen relaxes with cows on his Vermont farm.

The Allen Family Farm in Vermont

Four farms in the hilly rural town where Rory and Chris Allen live lost their contracts with the dairy company. The Allens and two others will be joining Organic Valley. Like the Allens, the others would have quit dairy farming if they did not have an option to market their milk organically.

Rory and Chris didn’t want to hang it up. “If Organic Valley wouldn’t pick us up there would be no milking cows here,” Rory said of his fifth-generation farm.

The family believes in the power of small organic farms and the importance of producing high-quality milk.

Farming is hard work, and it’s hard to take a day off (it’s been three years since Rory had one), but it is rewarding.

“I like working with animals, I like the diversity of equipment,” he said. “It’s different every day and you never know what’s going to pop up on any day, and I like the challenge of figuring out what’s right and what is wrong. You rise to the task and take care of it.“ 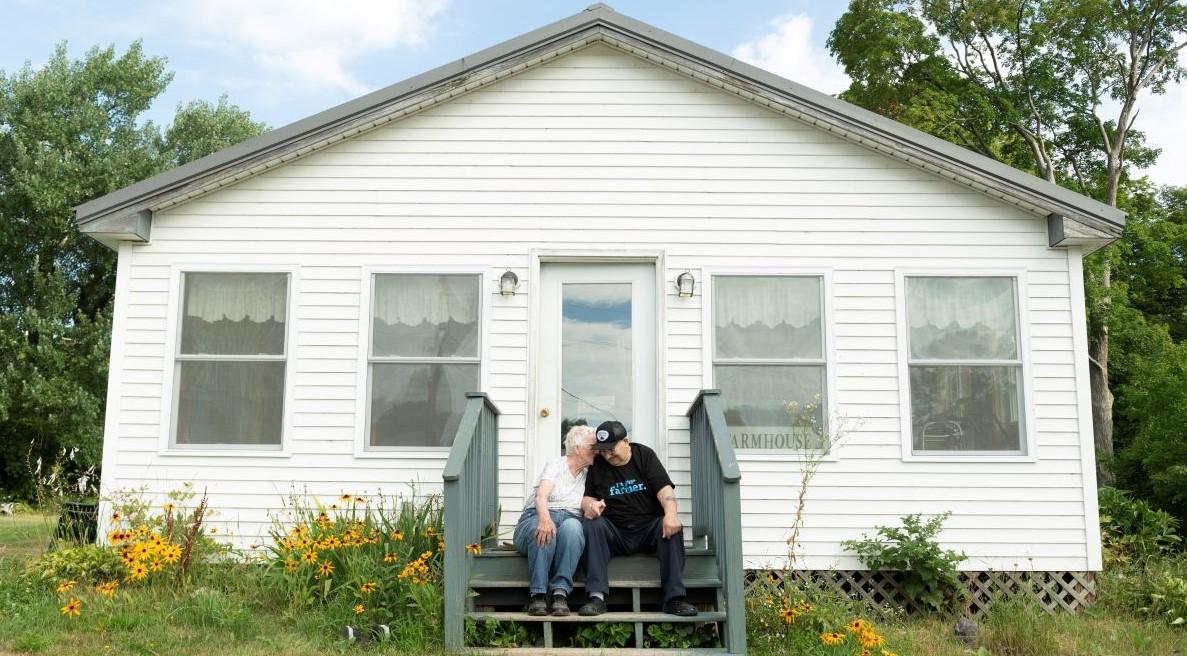 Malcolm and Marilyn Turner at their family farm in Maine.

How Many Dairy Farms are Left?

It’s no secret dairy farms are on the decline. No state saw an increase in licensed dairy operations from 2019 to 2020.

Members of the Mehuren family at their organic farm.

The way dairy cows are raised at Organic Valley is different from how it’s done on confinement dairy farms, which produce the majority of milk in the United States. Cows on confinement farms are kept in large barns and rarely, if ever, spend physical time on grass.

Cows are less likely to graze in pastures and more likely to be confined within large barns  on larger farms. Not at Organic Valley, where we believe cows belong in the field. Organic Valley  meets or exceeds USDA Organic standards for time spent on pasture and for the percentage of the cows’ diet made up of fresh grass during grazing season from pasture.

The Rooney farm in Vermont.

We Couldn’t do It Without You

Organic Valley farmer-members and team members are excited to welcome these families to the cooperative.

“Organic Valley was formed in 1988 to offer farmers an organic marketplace, and we are still doing that today,” said Travis Forgues, Organic Valley executive vice president of membership. “We care about small family farmers, rural communities, and fixing the broken food system. And that is what we bring to the marketplace: organic dairy people can feel good about.”

Farming small may not be the easiest way, but we know it is the right way.

Thanks to your continued support through the purchase of Organic Valley products, there is a positive difference in the lives of animals, the earth, small family farms and the communities that depend on them.

You, the reader, can submit a welcome message to the new Organic Valley farmers by clicking here.