Adapting to Our Changing Climate

For most of us, climate change is something that afflicts different neighborhoods, distant cities, or future times.  And while many people know something about California’s drought, or Miami’s drowning, few are aware that climate change has arrived in the Heartland, the breadbasket of our nation, and will affect all of us. This is because nearly all of our food is grown outside, under the sun and rain, completely dependent upon predictable weather patterns.

But those patterns have become less predictable and more extreme, as detailed in the State of the Climate Report just released by the National Oceanic and Atmospheric Administration. This report shows that not only was 2015 the warmest year on record, it also had the dubious distinction of hosting the most major tropical cyclones, the warmest ocean temperatures, and the highest greenhouse gas levels, with nitrous oxide and methane at new all-time highs, and atmospheric carbon dioxide exceeding 400 parts per million.

Facts like these are hard to absorb and tend to cause eyes to glaze or paralyzing depression to descend. Even farmers push such facts to the periphery as they go about their daily tasks. But sometimes, when one steps out of one’s usual routine, the reality of the situation sinks in.

This is what happened during the filming of A Season of Change on Henry’s Farm, a film focused on my brother’s organic vegetable farm. Together with his wife Hiroko, their children, apprentices, and farmhands, Henry has been running a successful organic vegetable farm in the middle of the chemical-industrial corn belt of central Illinois for the past quarter-century. He has maintained and promoted the intricate web of life, while producing over 100 tons of vegetables annually. Selling this bounty to local families has allowed Henry and Hiroko to make a good living and to send their three children to college. 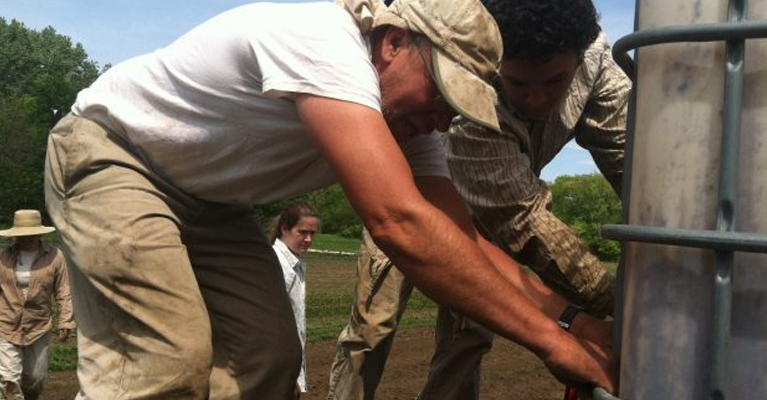 Henry Brockman and his son Kazami bring precious water to the vegetable transplants in early spring.

But organic vegetable farming is demanding — physically, intellectually, and emotionally.  As the film begins, Henry announces to his customers that he will take a sabbatical year in Japan–an almost unheard of move for a farmer. Just as Henry gives his fields fallow years to regenerate their fertility, he and Hiroko take a fallow year in a rural mountain village between Kyoto and Nagoya, where he hopes to renew himself.

But things do not turn out as planned. Although the Henry-less season starts out well, the farmhands are soon battling incessant rain during the wettest June on record. Meanwhile, Henry’s sabbatical frees his mind enough to let the global crises that had been at the edge of his consciousness take center stage. As Henry wrote toward the end of his sabbatical:

Over the past year, as I have slowly, really, truly raised my head and lifted my eyes, stepped out of the cycle of the seasons and the habits of body and mind, I have come to realize the obvious. The 10,000-year era of gradual and relatively minute fluctuations in the global climate that has existed since the end of the last great Ice Age, and thus since the dawn of agriculture and human civilization, has come to an end. That Earth no longer exists. We now live on a different Earth, a vastly different Earth, one where that steady-state of climate and environment is no more.  When I finally truly looked up the road to the Henry’s Farm of a quarter century in the future, what I saw looked nothing like the Henry’s Farm of today.

Upon his return from Japan, this realization forced Henry to begin implementing changes that will make his farm more resilient, a place where his children and grandchildren will be able to grow food for themselves and their communities, even in our increasingly volatile climate. 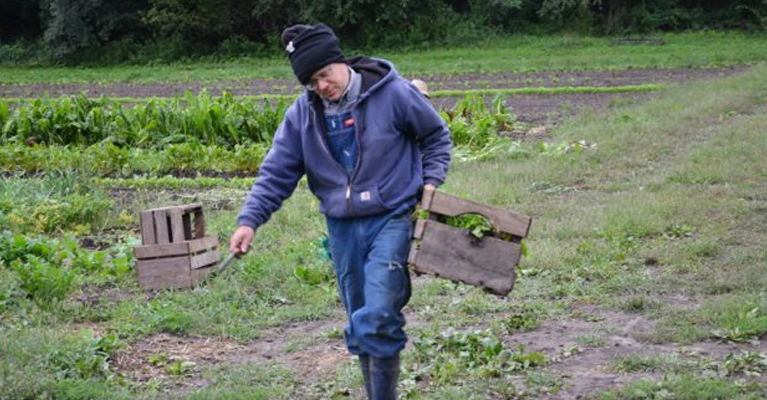 Henry harvests for the Evanston Farmers Market a few months before going on a year’s sabbatical.

Henry’s Farm has always been extremely biodiverse, with over 600 varieties of vegetables in the field each season. But in the coming years, the farm will become even more biodiverse, as Henry adds grains, livestock, nuts, and fruits.

Biodiversity — both in the landscape around the farm and in the crops themselves — is key to a farm’s stability and resilience. According to the United Nations Food and Agriculture Organization (FAO), genetic diversity underpins global food production, especially as the world’s weather becomes increasingly erratic, with heavier rains, longer droughts, and more severe storms.

This year Henry has added a new staple grain, rice. This new crop will not only enhance biodiversity, it  will conserve and reuse the precious resource of water.  All of the well water Henry uses to wash vegetables, as well as the rain that falls on his large packing shed roof, now drains into the rice paddy.

Energy from fossil fuels is one of the main culprits behind climate change, so this past spring Henry installed solar panels on the roof of his packing shed. Now, instead of using electricity generated in dirty coal-fired plants, his home and farm are powered by clean, renewable solar energy. To further reduce his carbon footprint, Henry will cultivate more local markets to cut down on the miles his food travels.

Other steps Henry is taking to make his farm adaptable and resilient in the face of climate change include taking the rich bottomland out of vegetable crops, and putting it into permanent pasture and trees to hold the soil during the more frequent and violent floods. He’ll also terrace hillsides, dig irrigation ponds, and take other measures to ensure that no matter what floods, droughts, and temperature swings may come, he can still produce food for his family and community.

Although the scale of our planetary crisis dwarfs us as individuals, A Season of Change on Henry’s Farm shows how one farmer and his family affirm their values through practical actions.  When these actions are supported by consumers, we can all move forward together, building adaptable, resilient farms, businesses, and communities. 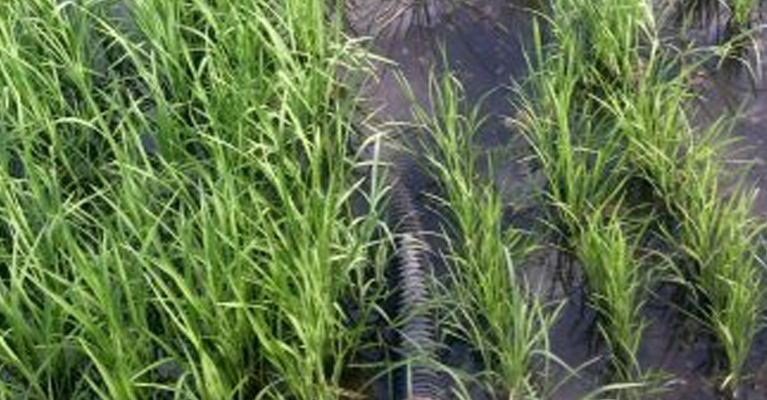