From Hurricanes to Wildfires: How We Help When Disaster Strikes

“Back in high school, I was told by a teacher of mine that during a disaster, it is all about response-ability,” said Clovis Siemon, disaster giving lead at Organic Valley and board member of Grassroots Aid Partnership (GAP). “If you have the ability to respond, you are response-able.”

In 2005, people like Clovis from across the country watched in horror as Hurricane Katrina unfolded into unprecedented disaster. People were without homes, without water, and without food. The need was profound, but when it came to food, Clovis knew he had the ability to respond.

And so did Organic Valley.

In the aftermath of Hurricane Katrina, a group of response organizations saw what was possible when giving during a disaster turns into working together for the benefit of all. 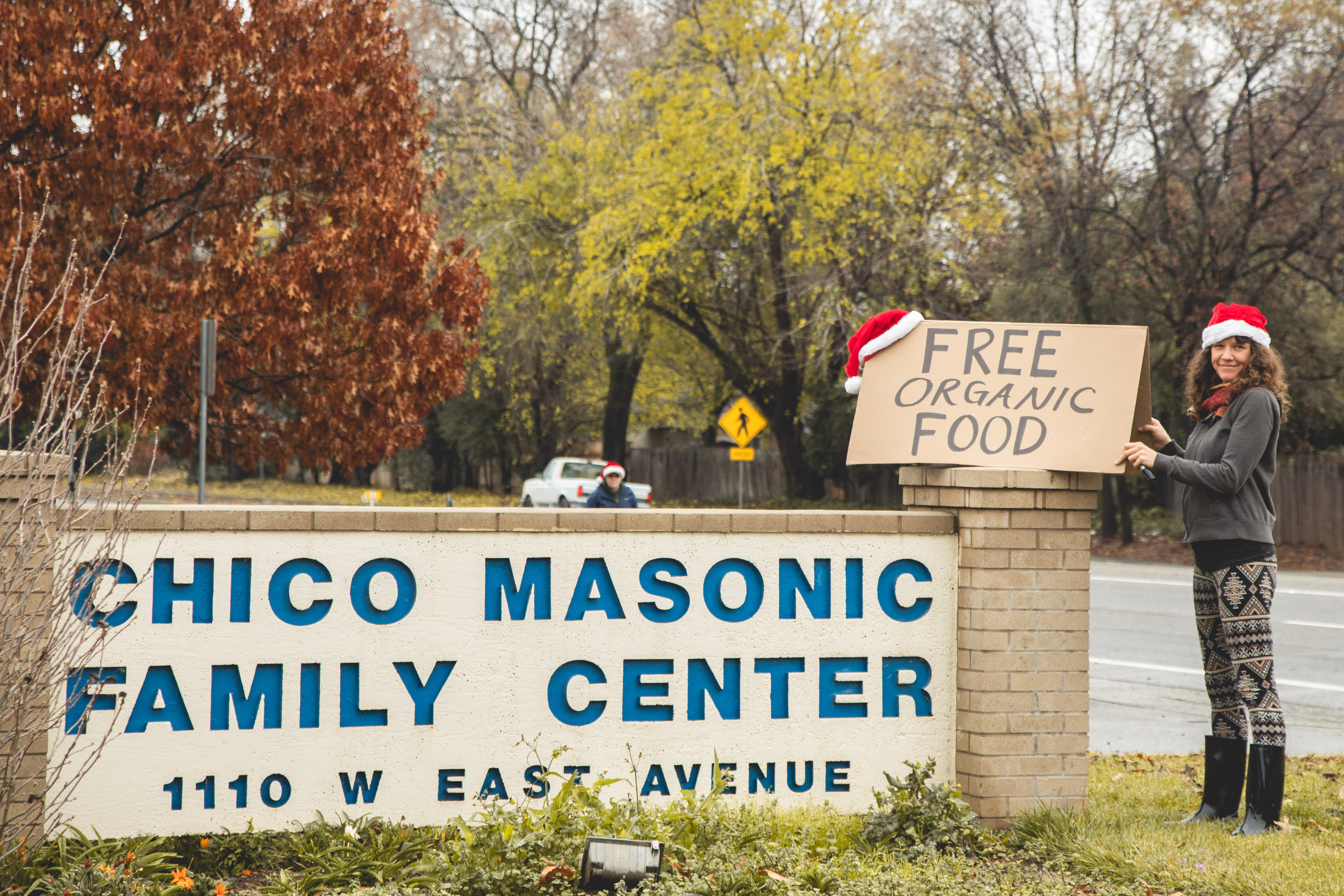 A volunteer holds a sign welcoming people for free organic food after a wildfire disaster in California. Photo by thetri.org.

Organic Valley had been donating millions of dollars worth of food to food banks and other needs in the communities they served for nearly two decades prior to 2005. The cooperative owned by organic farmers helped where they could, and hoped others would help when they couldn’t.

Clovis and others had experience cooking for thousands of people at a time. Many of them had worked with and for food brands their entire lives, so they knew there was good, organic food that could be donated to areas that needed it most.

That's when it clicked. Generous brands needed to combine their resources to make an even greater positive impact, and the volunteers had skills to provide a valuable service.

They would build a community kitchen.

Individuals like Clovis made their way through the destruction down to the Gulf Coast, landing in Waveland, Mississippi, to help where it was desperately needed. The volunteers quickly found what people needed most went beyond traditional measures.

“A lot of response organizations measure success by numbers of bottles distributed or calories served. But we discovered that helping during disaster is about much more than numbers,” says Clovis.

What started as a group of people with the desire and ability to help turned into the “New Waveland Cafe.” They served more hot meals at that pop-up community food hub than any other organization in Mississippi during the aftermath of Hurricane Katrina -- nearly 5,000 per day. But much more important, they served more than food. 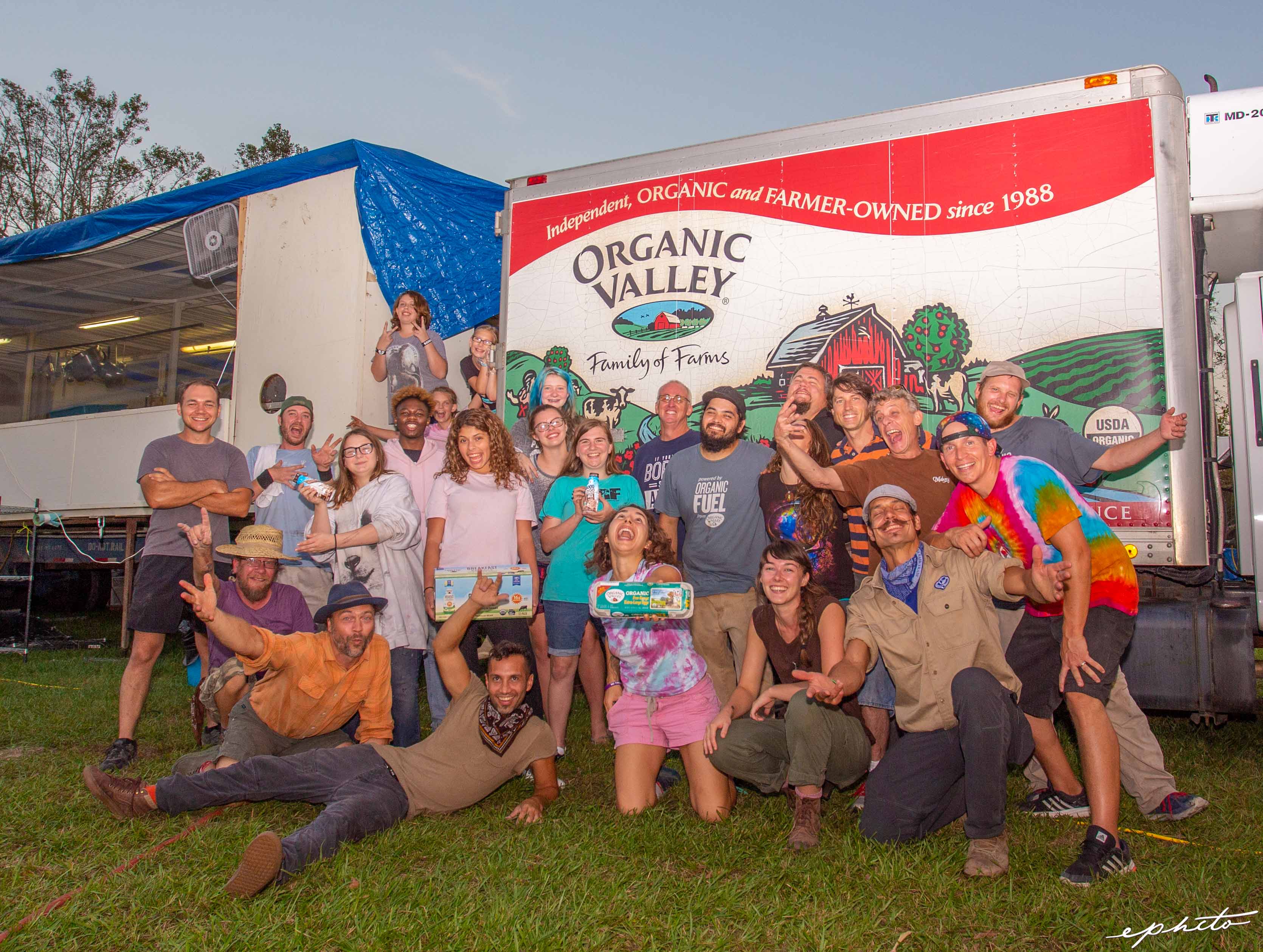 Volunteers gather for a joyful photo after a day of serving up hot meals and soul food to the North Carolina communities impacted by Hurricane Florence in 2018. Photo by Ernesto Borges.

“We made sure that all the volunteers took turns eating with people, listening to people, enjoying music with people. A community was born out of disaster. Real organic meals were enjoyed together. You could see fuller bellies and fuller hearts,” says Clovis.

For the next decade, Organic Valley and organizations like United Peace Relief and Grassroots Alliance would end up sending the same kind of help to disaster after disaster.

A GAP Is Filled

Then in the summer of 2018, after seeing the ability that food and consumer brands had to respond, the response organizations and companies came together to create a way to make their goods go even further. Grassroots Aid Partnership (GAP), the new organization, would serve as the conduit to gather resources from those with the most ability (brands like Organic Valley, Dr. Bronner’s, Patagonia and others), and to direct them to the grassroots response organizations that are helping on the ground.

In short, GAP’s purpose is to be a resource hub that directs goods toward disaster relief organizations that meet unmet needs. GAP fills the gaps!

In just the first year, Organic Valley saw its donations matched three times over now that they were giving them through GAP. As brands saw where their extra food and products could go, and how others were joining forces, these businesses matched monetary and material donations. It showed the power of collective strength versus the individual.

Before all the ink was even dry on the paperwork, these new donations were already helping during the aftermath of category 5 Hurricane Michael and category 4 Hurricane Florence in 2018. GAP also led major efforts in relief during and after the Camp Fire in California. In fact, the aid provided by GAP and Organic Valley ended up making a major impact in a place devastated by fire. 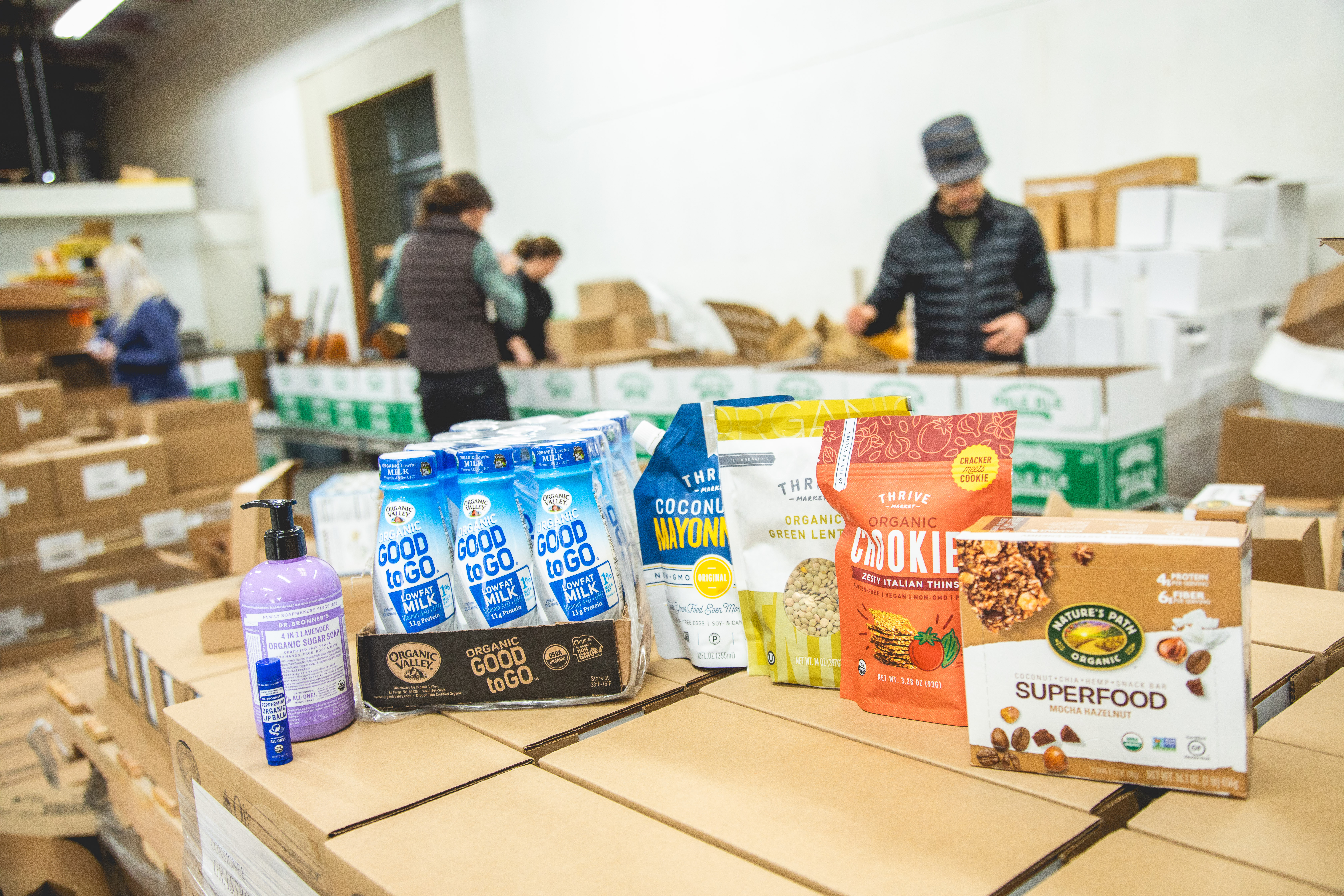 GAP and other volunteers put together care packages in the communities devastated by the Camp Fire in California in 2018. Photo by thetri.org.

“These brands already have the goods to do more good during disaster. Why wouldn’t they help?” asked Clovis. “We’re there so we can help turn their positive intentions into real, needed action when disaster strikes. We turned donations into healthy food and community that fills the stomach and the soul.”

For years, Organic Valley has chosen to respond with their ability to give organic food where it can be used best, including food banks, local organizations, and schools in the areas where its facilities and farmers are located.

One such long-term partner is Convoy of Hope, a nonprofit that responds to disasters around the world. “Convoy of Hope has had the pleasure of working with Organic Valley since 2010,” says Bill Whitworth, Convoy of Hope's procurement director.  “During this time, Organic Valley has provided Convoy with more than $1 million worth of donated food to support our mission. We are grateful for the partnership—we could not do the work we do without Organic Valley’s support.”

When it comes to helping outside of the local community, GAP fills in the...well...gaps in aid. GAP is the natural evolution of a decades-long collaboration and refinement of how to do more good with the goods donated during times of major disaster. 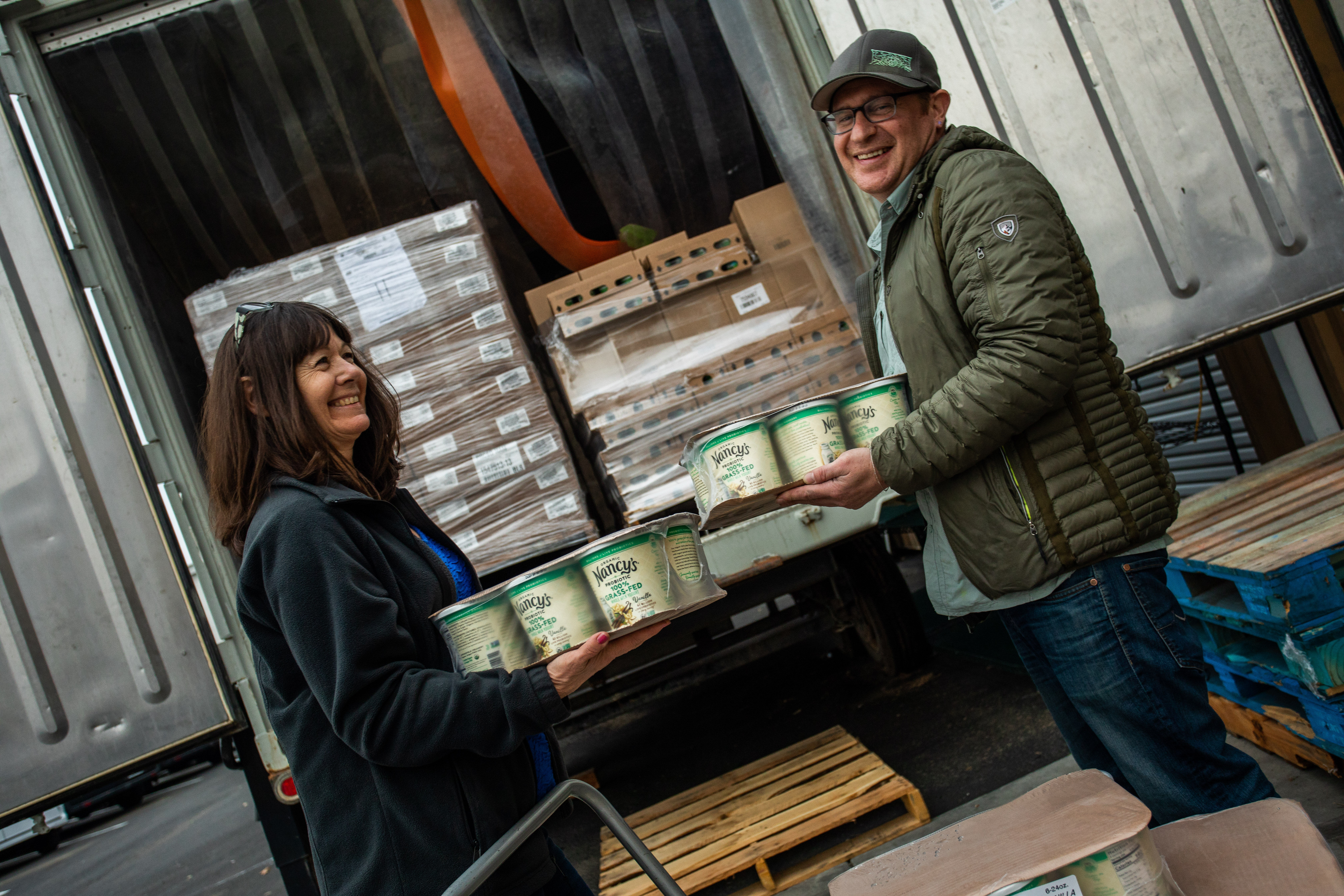 Nancy’s Yogurt donated many healthy products to help provide relief to the survivors of the Camp Fire in California in 2018. Photo by thetri.org.

And this cooperative isn’t the only brand out there doing good things. Companies like Clif Bar and Nancy’s Probiotic Foods donate because they are in a unique position to give what they create. Innovative partnerships like GAP and Convoy of Hope then use their expertise to respond with the goods provided.

“If I could ask people to remember one thing about giving and doing good, it is that they can help. We all have some ability, so use it to respond where you can,” says Clovis.

Visit the Grassroots Aid Partnership website to donate. Cash donations can go even further than food donations because many donations go towards transporting donated food right into the most devastated areas. Donations can help get 10 times the amount of food into a disaster zone when used the right way.

Interested in volunteering to the best of your ability? Contact GAP before disaster strikes to be ready to help when communities need it most. 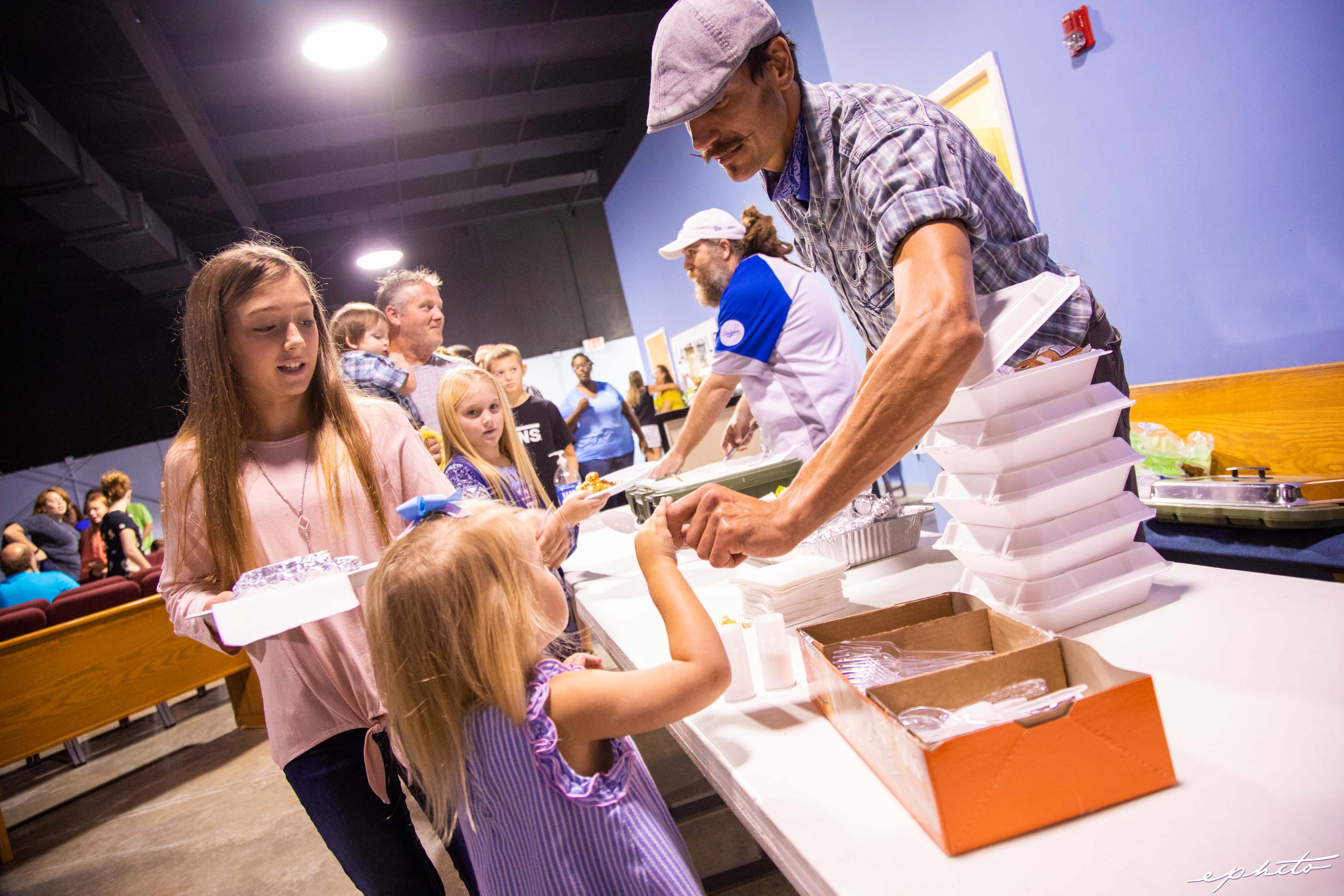