Sharing the Abundance of Rural America

I grew up in a small farming community in central Minnesota. Whenever we had visitors from big cities or even other countries in town, we always took them to my aunt and uncle’s dairy farm. My dad would regale us all with stories of growing up on the farm, and my uncle would let us each milk a cow by hand before showing us his newest toy in the machine shed and turning us kids loose in the hayloft.

These visits were something we always looked forward to, but as a kid, I was always more interested in the visitors than the farming. We knew that some of our guests’ questions were silly. “How old does a cow live in the wild?” And we’d joke after they left about how they instinctively, and constantly, locked their car doors behind them. But still, they were shiny and worldly and fascinating to me.

As I got older, this interest in “getting out” was actively encouraged. Like many rural kids growing up during and after the 1980s Farm Crisis, we heard about farmers going out of business left and right. Between soaring interest rates and plummeting crop prices, farm foreclosures were an everyday occurrence. No parent wanted that for their children. Even my cousins who grew up on the family farm were encouraged to get degrees or become tradespeople.

Now when my kids and I visit my hometown, we don’t go to the family farm anymore. My aunt and uncle sold their cows in 2012, moved out of the farmhouse in 2015, and now their sons all work in town. It’s a story that is playing out again and again throughout the rural Midwest. 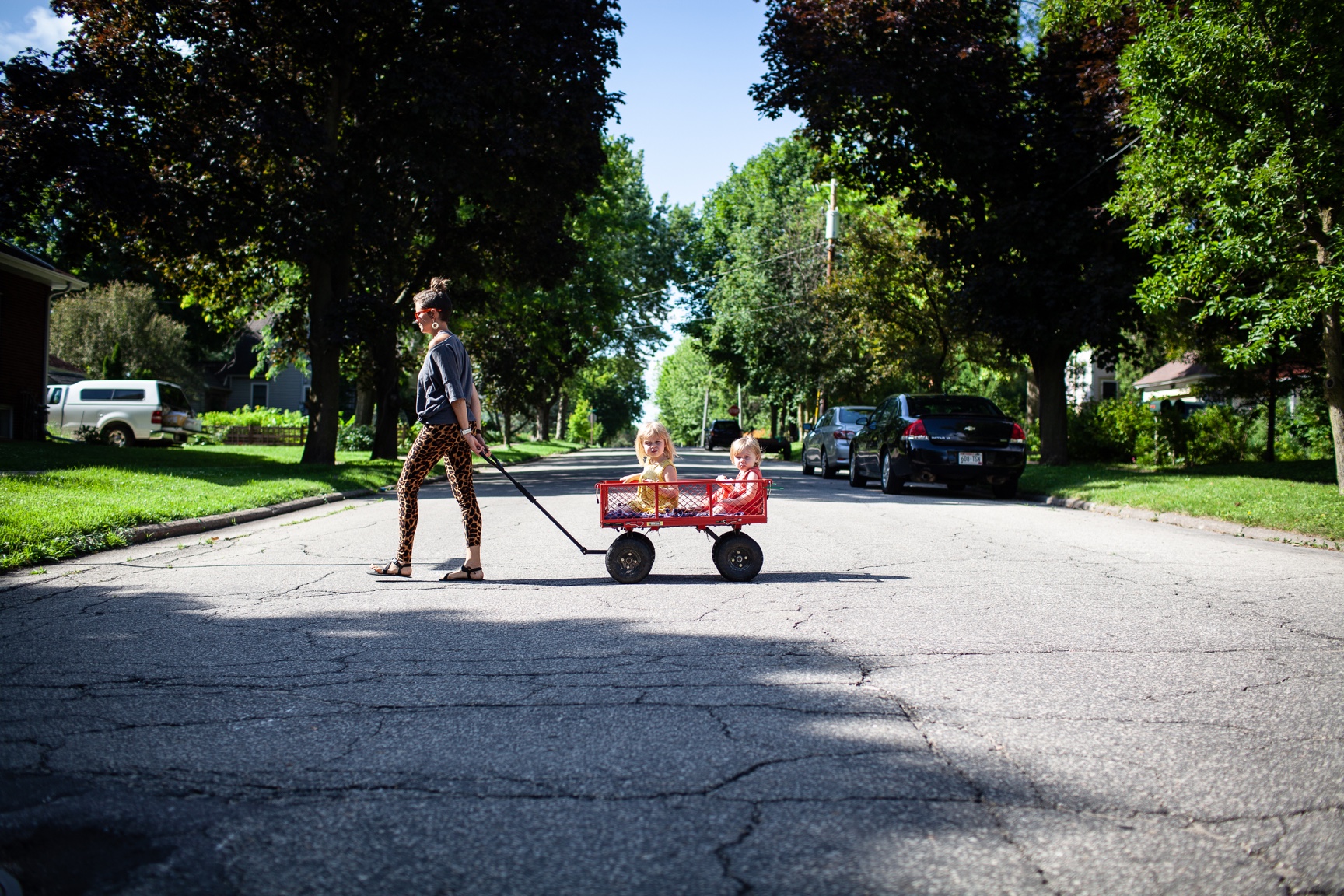 Indeed, it was only when starting a family of my own that I took the time to personally examine the narrative about urban opportunity and rural plight that I – and many in my generation – had internalized. By the time I turned 30, I had kids of my own and had spent more than a decade studying, living, working, and as a tourist in large urban areas.

My wife, Ashely, and I were really good at enjoying the best of big city life, yet if we could give our younger selves a bit of advice, it would be to not so quickly accept the story that rural places have little to offer. We missed our families and the richness of community we grew up with. We liked the rhythms and rituals of food-producing regions. And we longed to have a more regular, meaningful connection to nature.

Returning to Our Roots

In 2014, we announced that we’d be relocating back to the Midwest, and not to one of the region’s many bustling hub cities, but to a small town of less than 5,000 people in southwestern Wisconsin. It was Ashely’s uncle Kevin who turned us on to Viroqua. Kevin was an early farmer in CROPP Cooperative (better known as Organic Valley), and on his visits to the cooperative’s headquarters over the years, he was increasingly impressed with what was happening in nearby Viroqua. 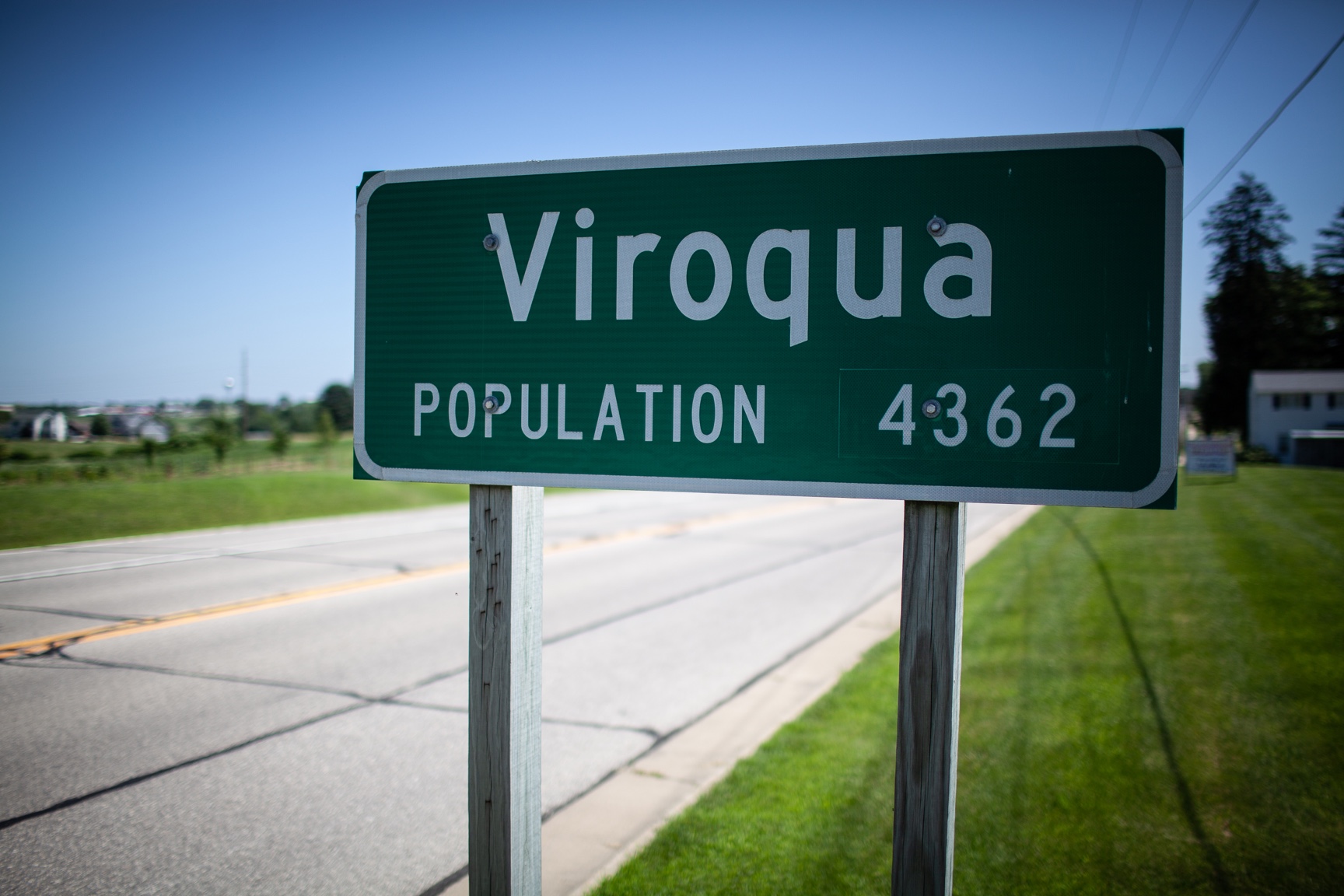 And we were, too. Not only did a group of local farmers in the 1980s launch what would become the world’s largest organic dairy cooperative, but in the 1990s, a group of teenagers started their own high school, and – in the decades since – all sorts of entrepreneurs, artists, educators, and community organizers had left their mark as well. The result today is a vibrant rural place teeming with energy and welcoming of visitors.

While this squares my reality of growing up in similarly successful small town, it’s at odds with our culture’s more prominent stereotypes of rural America and – for increasing numbers of small towns – the subsequent reality.

Our current economic model is extractive, and while rural places and their people provide humanity with nearly all its food, fiber, fuel, and natural resources, most of the monetary wealth that is generated is concentrated in cities. Certain kinds of resources and opportunities, then, are increasingly only on offer in big cities.

So what should we make of those who “stay behind”?

The world over and throughout history, as more people move to cities, the othering and stigmatization of rural people becomes more pervasive. When the locus of power shifts to urban centers, popular culture tends to depict rural folks as uneducated, backwards, or stuck in time. This just makes it easier for American businesses, lawmakers, and consumers alike to ignore – or worse, to justify – the continued exploitation of food system workers, farmers, and other rural folks.

I’m a classically trained anthropologist, and all this makes sense to me intellectually. But it always hits me in the gut when well-intentioned people living in beautiful, friendly, vibrant rural places encourage their young people to “get out.” I’m reminded just how strong these currents are in our culture.

From my new perspective as someone returning to and re-committing to rural America in all its complexity, I quickly saw how much we had been missing. And not just “we,” the odd parents who wanted access to fields and farm animals for our kids. But all of us – anyone who eats, drinks, wears clothes, or heats their home has a rural person to thank, in part, for their comfort.

My perspective was also informed by my work with Ashoka, the world’s largest association of leading social entrepreneurs who, since the early 1980s, have been recognized and supported as they creatively tackle entrenched social challenges, from education to healthcare, from agriculture to city procurement. Through this network of inspiring problem-solvers, I’ve come to see that the people closest to a challenge are the best equipped to solve it, and that good ideas emerge everywhere. Who better to help fix our food system, apparel sector, or extractive industries than rural stewards and visionaries?

Unfortunately, rural innovators are vastly under-represented in national networks of support. And I noticed a similar pattern at Ashoka when I became Director of Venture and Fellowship in 2015. At the time, more than 60% of Ashoka Fellows were located in just four coastal cities.

With support from a Texas-based family foundation, we started a concerted effort to elect and support Ashoka Fellows who reflect the full dynamism and diversity in the country. For the last few years, we’ve committed to connecting with and supporting innovative leaders from all racial and cultural groups, from towns large and small, and from all across the country.

Hailing from places like Duluth, Minnesota; Laurinburg, North Carolina; and Henderson, Texas, more of our Fellows today are living and working in places far from our economy’s few hub cities. But this doesn’t mean they are disconnected from those places. Rather, we learned that one of the biggest strains on small-town social entrepreneurs is the amount of time they spend traveling to network, raise awareness, and repatriate funds from wealthier urban areas.

That burden of more time on the road is often shouldered by families at home. In this way, they are like so many other changemakers in our network: They do this work because of their families and communities, but the act of doing strains those relationships the most.

So this summer, Ashoka partnered with Organic Valley to help 16 U.S. Fellows and one from Peru come together in southwestern Wisconsin for our first-ever Family Camp – a week of nature, connection, and rejuvenation for these valued changemakers and their families. 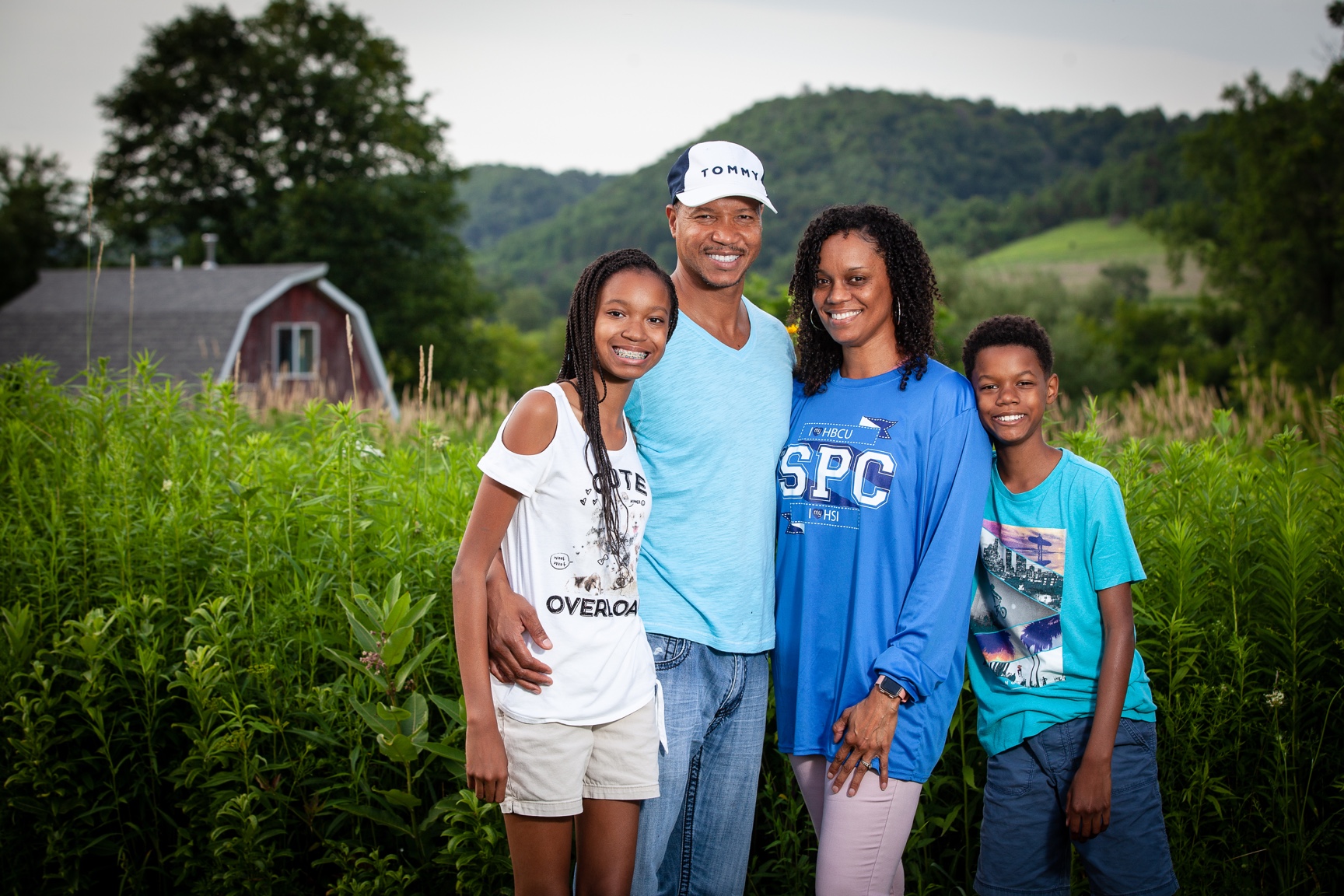 Ashoka Fellow Steve Miller and his family from Henderson, Texas, drove up to Ashoka’s first Family Camp in Viroqua, Wisconsin, where they spent time in nature and connected with other Ashoka families. Photo courtesy of Ashoka/Colin Crowley.

For a week, we toured farms, climbed trees, canoed the Kickapoo River, prepared and ate great (local) food, and asked silly questions that reminded me of those childhood visitors to our family’s farm. (On a tour of Organic Valley’s headquarters office building in La Farge, someone asked, “Where are the cows?”) Folks joining from other rural areas of the U.S. enjoyed a week of someone else cooking for them and meeting people from all over the country all on one trip. And those joining from big cities – some of whom admitted to never even thinking about the Midwest, much less about visiting it – were dazzled by the abundance, ingenuity, and vibrancy of a farming community in mid-July. 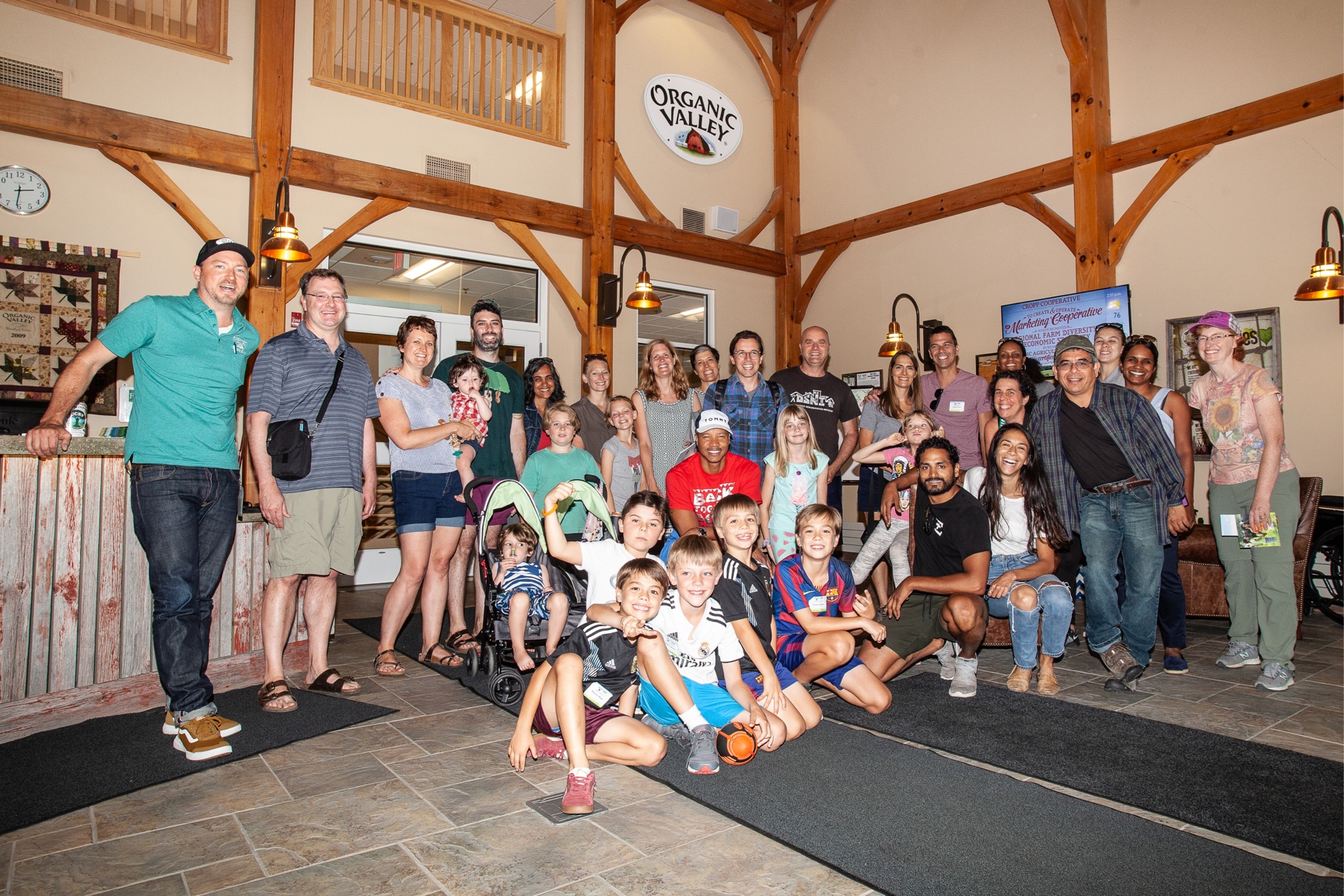 During quieter, contemplative moments, these parents who are trying to change the world reflected on the impact that’s having on their relationships and on their kids. These are the sorts of conversations countless farming families have had – and will continue to have – as they struggle to balance doing good and doing well while taking care of the earth, themselves, and their kids.

At moments, I heard more questions than answers. But over the course of the week, I observed a subtle shift, mirroring the awareness I’ve gained as I’ve examined and challenged my own perceptions and internalized biases of rural places. And it was this: We will continue to find some things mostly in cities, but it became abundantly clear to a lot more people that rural places have a lot to offer, too. 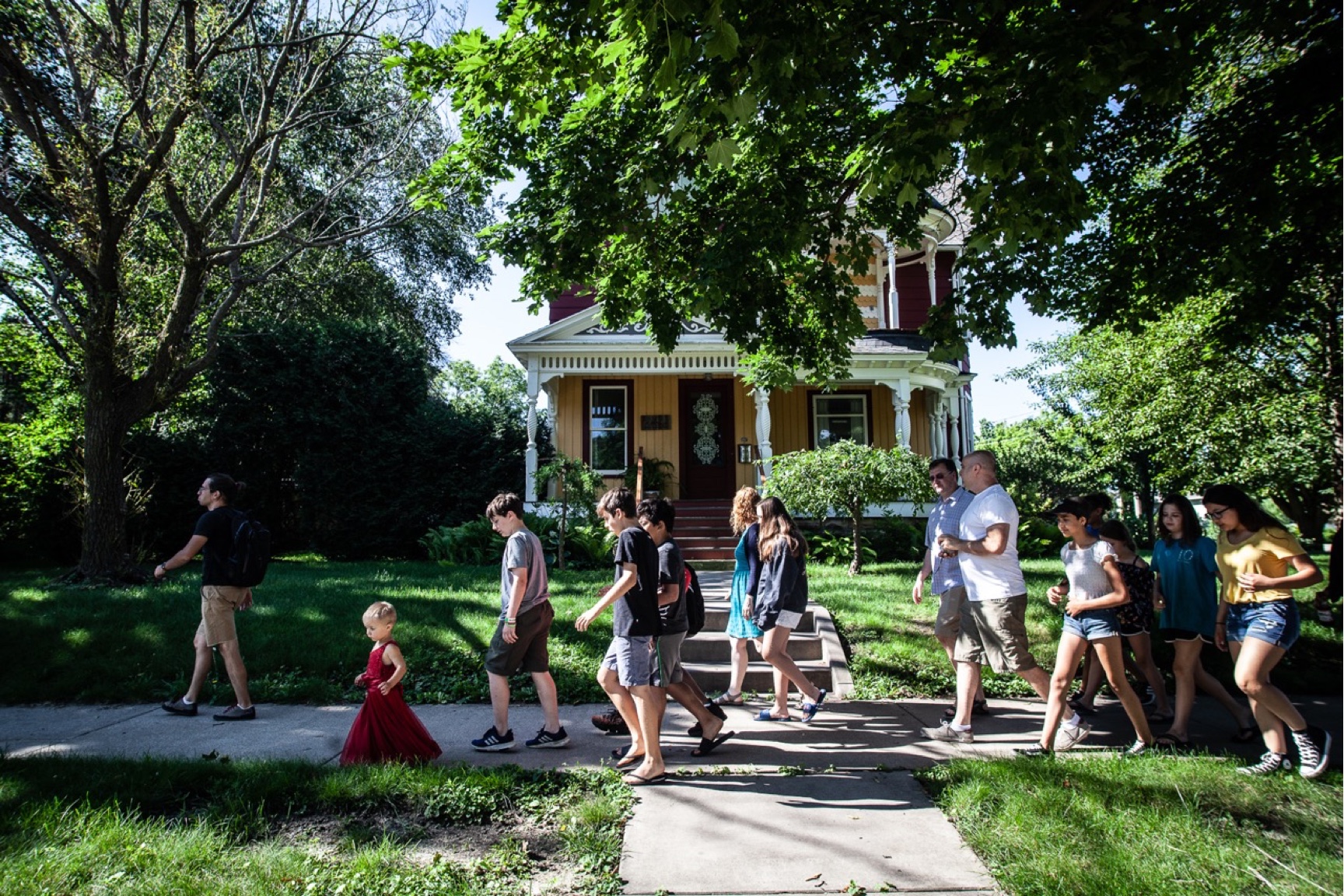 Our visitors spoke about the beautiful scenery, fresh air, and organic food. Spouses found time to connect with each other. Kids cooking over campfires and camping out overnight gained a sense of accomplishment and awe. One evening, each family was given $20 and the addresses of a different farm-based business or roadside produce stand. After an hour or so, they all returned with their ingredients (and stories!) and we, together, cooked up a feast. Like the local, do-it-yourself dinner we created, the overall shared experience was unique, meaningful, and as rich as the rural place that hosted us. 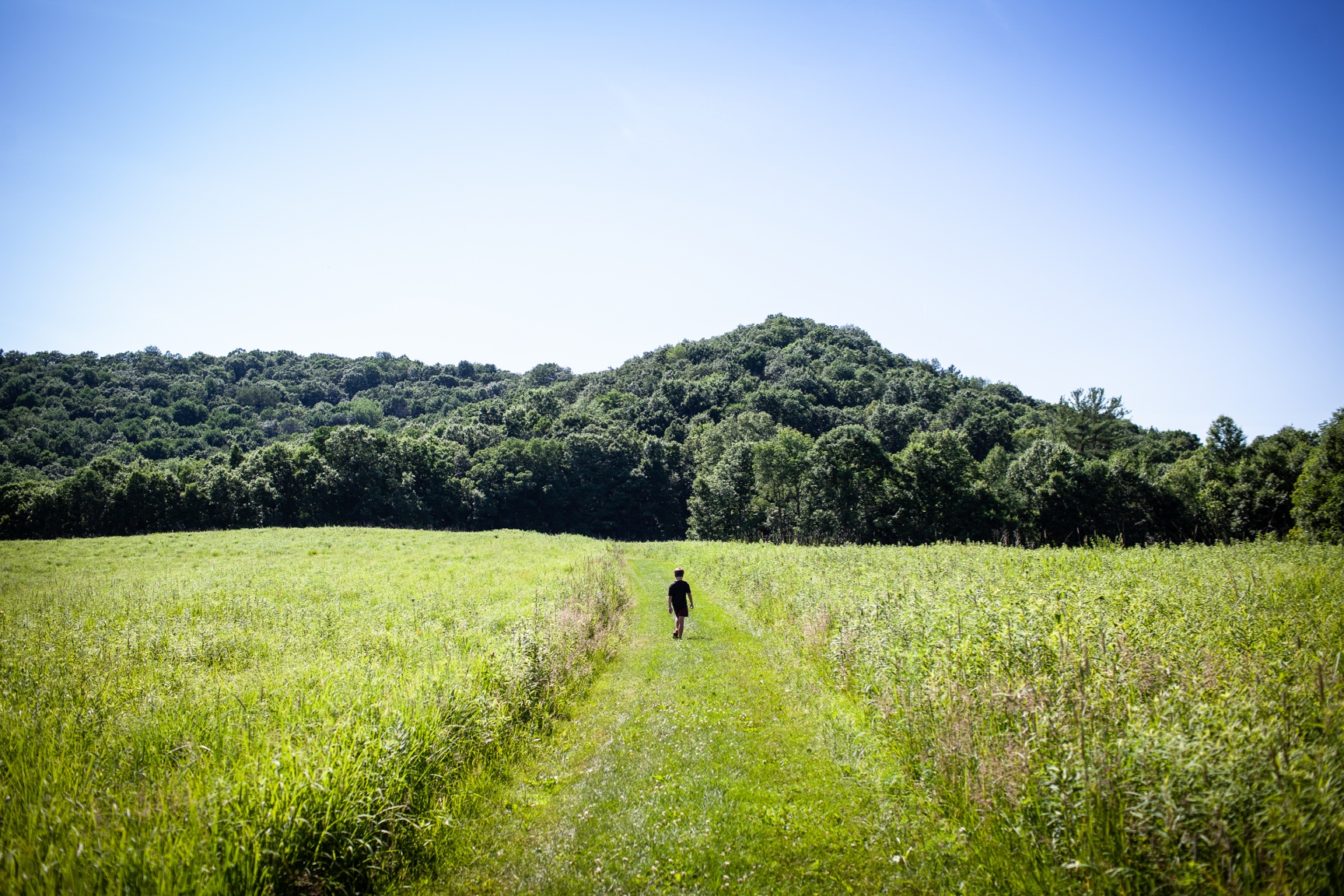 Child of Ashoka Fellows exploring Wisconsin’s Driftless region. What idea of rural America will they grow up with? And did this immersive week-long experience plant new seeds?  Photo courtesy of Ashoka/Colin Crowley.

While our national narrative screams that big things happen mainly in cities, we all had the chance to remember that rural places bring so much to the table, too (not to mention everything on the table that’s edible!). Let’s make sure that our rural places are as compelling, welcoming, and accessible as our (wonderful) cities and, therefore, relevant long into the future.

Ashoka’s effort to support rural innovators is in line with this vision. Organic Valley’s cooperative of more than 2,000 family farms is clearly on board. And this summer’s Family Camp was just one example of a creative, inviting way for more people to experience what rural places have to offer and why they matter. 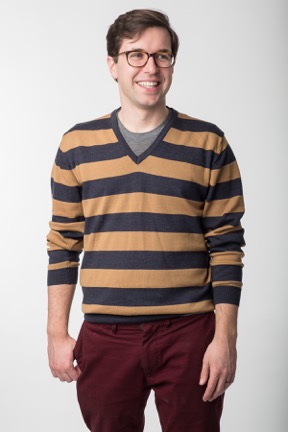 Simon Stumpf is the Director of Venture and Fellowship for Ashoka in the United States. In this role he helps identify and support Ashoka's annual class of systems-changing Fellows in the U.S. For four years previously, Simon led Ashoka's programs in East Africa and, before that, coordinated a global collaboration of over 100 leading social entrepreneurs focused on rural innovation and farming in Africa and South Asia. He writes about his work on Forbes.com and has contributed articles to the Stanford Social Innovation Review, Fast Company, and the Christian Science Monitor. Simon holds degrees in anthropology and African studies from Yale University.  A native of rural Minnesota, Simon lives in Viroqua, Wisconsin, with his wife and kids in a house he designed and built with his dad and on eight acres that he's busy pruning, gardening, weeding, or shoveling, depending on the season.