You Won't Believe What Farmers do for Birds!

In a country where grassland birds have significantly declined, there is a special little haven in north-central Ohio where birds flourish. A handful of Organic Valley farmers plan to keep it that way by going to great lengths to protect and attract birds.

The agricultural practices, habitat, and organic farming methods on these farms create a safe place for birds to lay their eggs. Hundreds of species, and thousands of migratory birds, make their way to these bird-friendly farms. This includes one of the longest migrations of all songbirds; bobolinks travel up to 12,000 miles round trip from Central America to the U.S. to find breeding grounds in prairies, meadows, hayfields, and other grasslands.

How special is it that of all the places to choose, an amazing number make this land in Ohio their nesting ground? 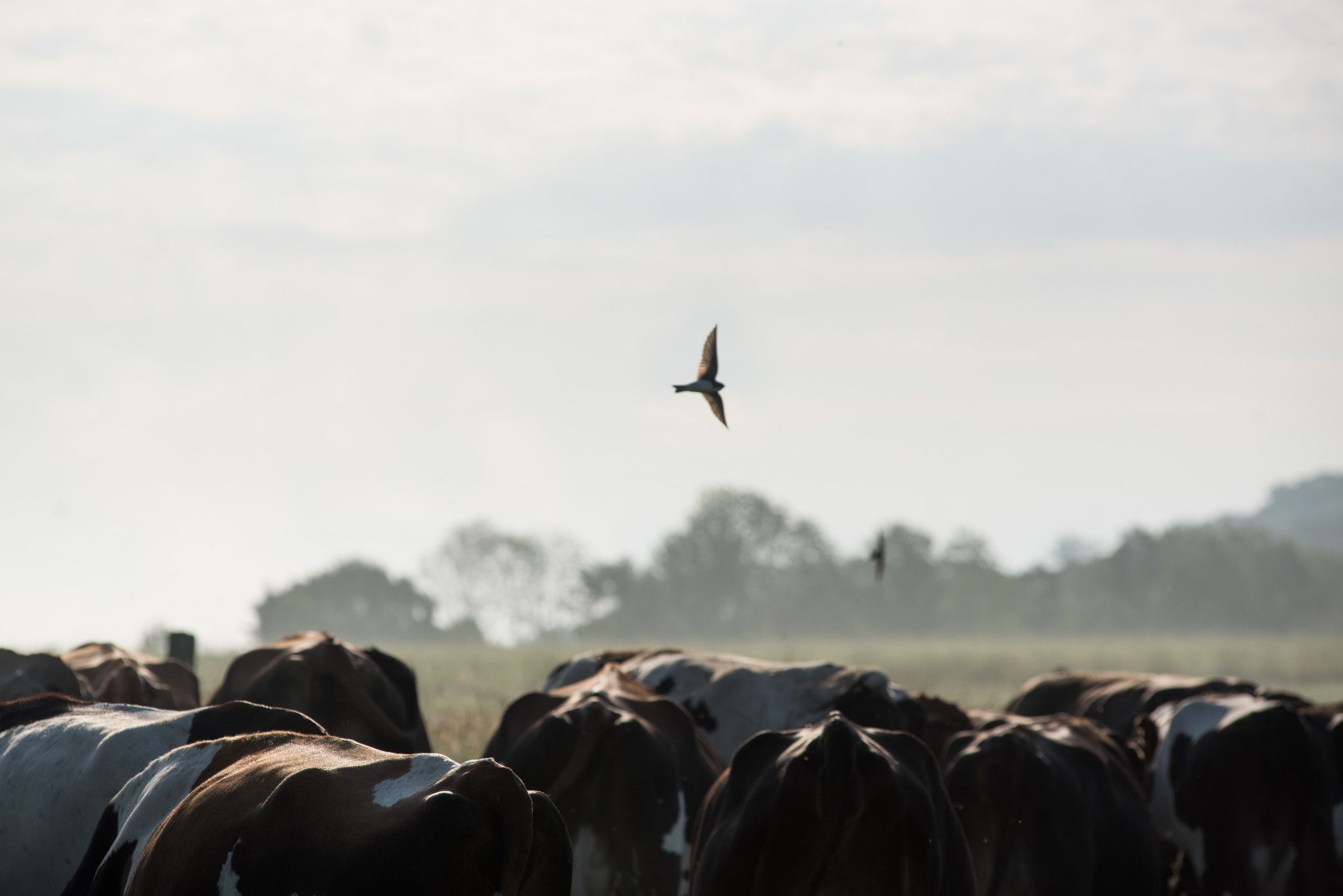 Birds and cows on Jerry Miller’s farm in Ohio.

“If you work with nature things tend to do a lot better, and I think the birds appreciate that,” organic farmer David Hershberger said.

The birds provide lovely sounds, are entertaining to watch, promote farmland biodiversity, and control the population of flies and other bugs that are bothersome to cows and people.

Birdwatchers are taking notice. It’s a birds’ oasis and it’s not uncommon to see bird enthusiasts from all over break out their binoculars and cameras.

Why are birds attracted to this group of organic farms in Ohio?

Many birds make their nests on the ground—tucked in the grass where they are tough to see. This can be bad news for the birds when farmers take to the field. However, a number of Organic Valley farmers slowly and watchfully walk their fields to find nests. When they spot a nest they put a flag next to it so they are sure to miss the nest when they mow hay.

Farmers are also mindful of grazing practices and leave areas where cattle cannot graze, to minimize the chance of eggs being trampled. Rotational grazing can also be beneficial. The wonderful thing with cows is they don’t make a clean sweep of things. They pick and choose what to eat.

The cows seem respectful of the birds’ habitat. A farmer captured cows on one Organic Valley farm eating grass all around a red-winged blackbird nest but leaving the nest and egg untouched!

Do Not Cut Hay Until it’s OK

Along with flagging nests, these farmers are considerate when it comes to mowing hay. Chopping too early means squashed eggs or injured (or worse) fledglings. Farmers delay cutting hay until it's safe for the eggs and nests.

Elmer Graber is within shouting distance of the other neighbors mentioned in this story. He enjoys the sights and sounds of the many birds, including meadowlarks, that share his farm. Graber, who is Amish, clips hay high enough that nesting birds will not be touched by the mower. Horses can be more forgiving to the nests than tractors, too.

Graber said about 30-40 nesting pairs of bobolinks can be found on his land. “It’s so nice to go out in summer late evening and early morning; you can hear them chattering and doing their mating calls,” he said.

Miller is also selective about when he cuts hay and sometimes he will cut hay only twice in a season instead of three or four times. It’s not hard to coexist successfully with birds as long as farmers are educated, he said. 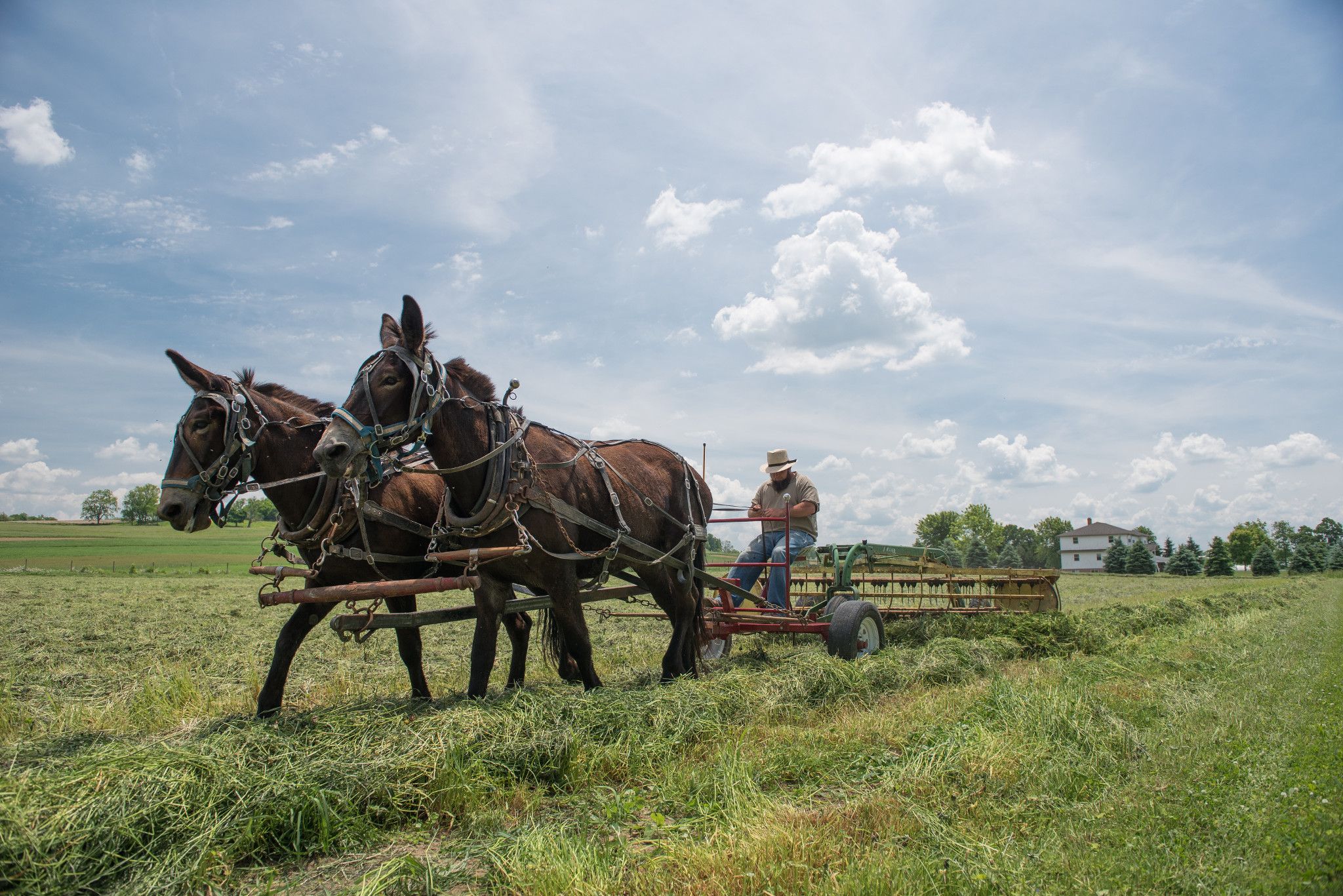 Raking hay at the Hershberger farm in Ohio.

And the birdhouses. Oh my goodness, do these farmers have birdhouses! Bluebird and tree swallow boxes, hollow gourds for purple martins, owl boxes—you name it!

Graber’s son Michael, who is 13, put bluebird houses every 100 feet across the fence lines. He cleans them and makes sure no critters have taken over.

They also have barn owl boxes. Last year he saw 120 bird species on their small family farm. They enjoy the visitors but also, “It makes you feel better that you are taking care of the environment and the ecosystem,” Elmer Graber said.

Though Hershberger jokingly says, “we are in a war with house sparrows; they are bossy and loud and stay around the house” and he’s also not a fan of starlings, he knows these birds have their place.

“There are a lot of connections in the field. The birds are working for you and you enjoy them,” he said. 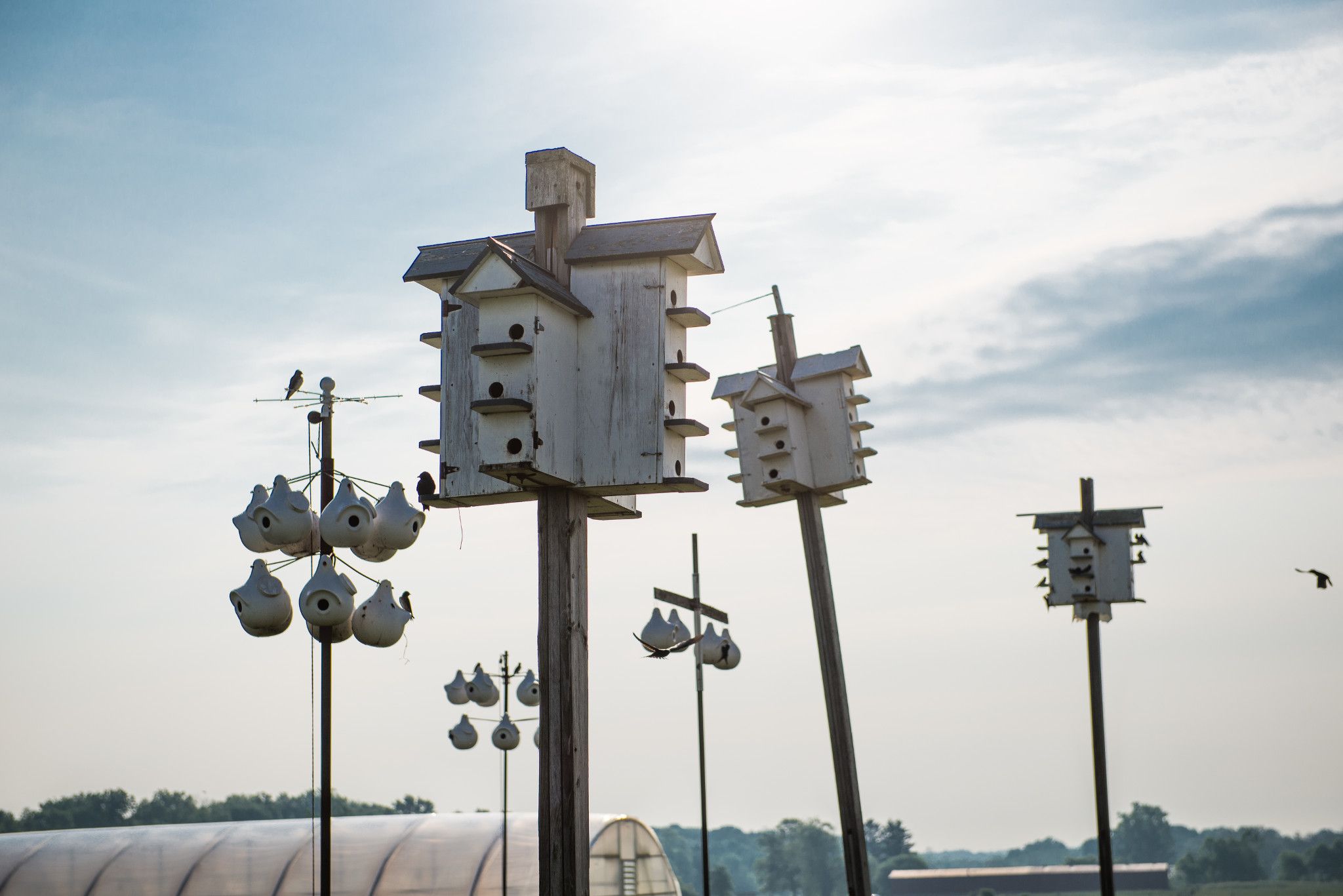 Birdhouses at the Martin farm in Ohio.

New Life for an Old Tree

No one knows how old the “big, big” poplar tree was at neighbor Jerry Miller’s organic farm, but it was at the end of its life and needed to be harvested. “Everything in life eventually dies,” he said. “It had been there for years and I wanted to do something with that tree to help with the ecology of the farm.”

He cut the tree down and sawed it into boards so he could make bluebird houses. It was enough for 200 to 300 bluebird houses! The Millers put 150 on their farm and gave many to neighbors and friends.

Jerry Miller also forgoes haying until it's safe for the birds. Along with bluebirds, a tremendous number of bobolinks—it’s not uncommon to see 50 to 60 in a group—nest at his farm. “It’s always a song and dance in the springtime,” he said. A magnificent snowy owl also made an appearance. “I enjoy wildlife and birds and it’s all part of a healthy ecosystem. It’s the way the good Lord created things and we are just stewards.” 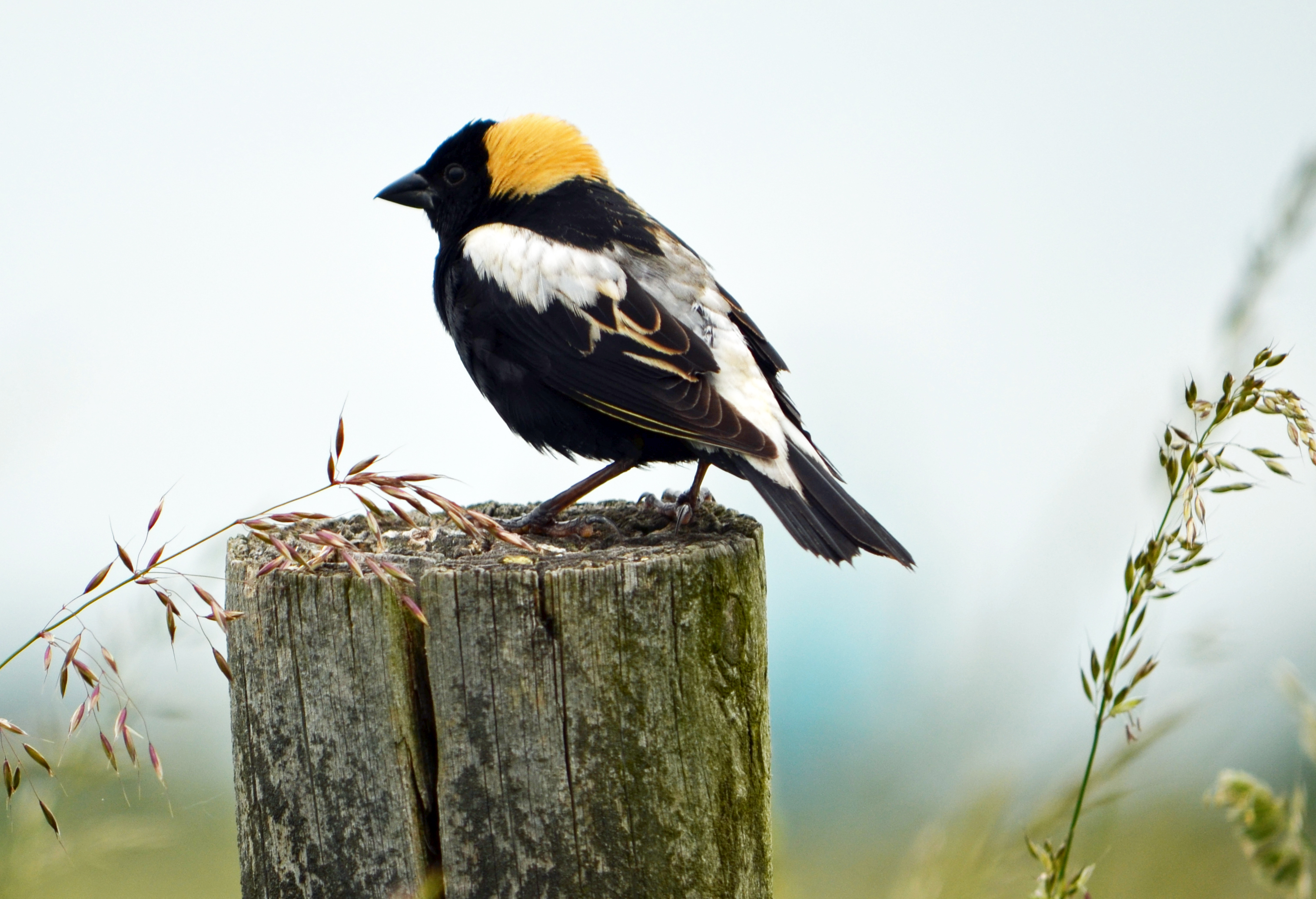 A bobolink perches on a fencepost.

Every farmer in this story speaks highly and tenderly of many birds but particularly of bobolinks.

These birds, the males sporting brilliant yellow tassels on their heads and appearing to wear a tuxedo backwards, are in great decline mainly due to habitat loss, particularly repeated hay harvests, according to the American Bird Conservancy. Bobolinks are also vulnerable to pesticides, particularly on their wintering grounds, where they are sometimes poisoned and shot as agricultural pests.

A 2019 study showed that grassland bird species experienced a 53% population reduction since 1970 and the bobolink is listed as a species of concern (it may become threatened in Ohio under continued or increased stress) by the Ohio Department of Natural Resources.

Organic Valley farms never use GMOs, synthetic hormones, antibiotics, or toxic pesticides. They also keep the farmland ecosystems friendly for their animals and for birds and wildlife, in general.

The bobolink has inspired poets and authors such as Emily Dickinson and Organic Valley farmer David Kline, who shares his observations of birds, wildlife, and serenity in his book "Great Possession: An Amish Farmer’s Journal."

“When they return to our hayfields next year to join the other hayland birds, they will have traveled 12,000 miles and will again serenade us with their cheerful, rollicking song,” Kline writes of the bobolink. 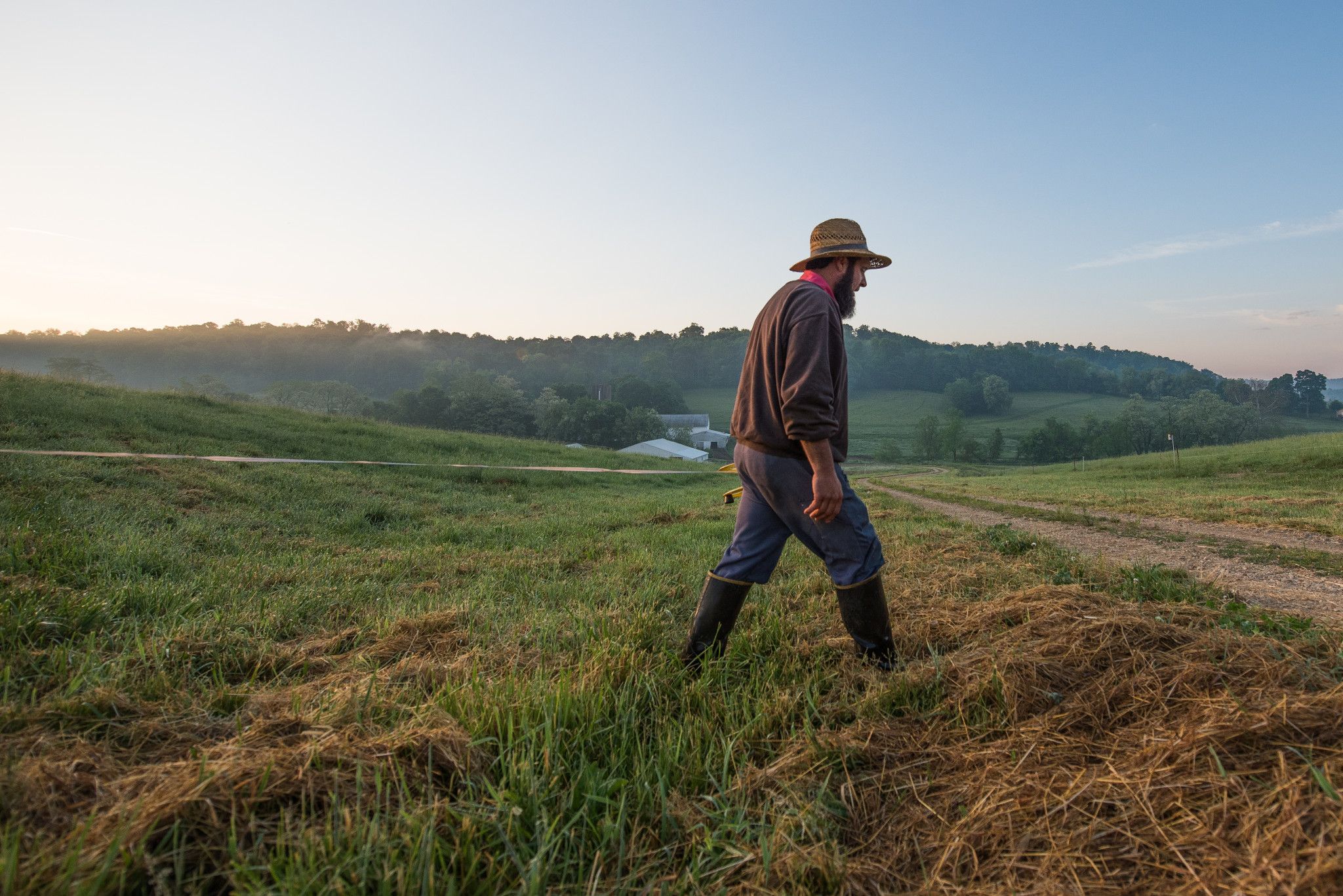 The Kline family farm in Ohio.

Grassland birds play an important role in the environment, said Shawn Graff, American Bird Conservancy vice president, U.S. and Canada operations. “They prey on insects and rodents that can damage crops or carry disease,” he said. “Farmers would see crop yields decrease and would likely need to spend more on fuel and chemicals without the free ecosystem services that these birds provide. In addition, grassland birds are fun to watch and bring ecotourism dollars to local communities.”

The Kline family enjoys the birds and is happy to see other birdwatchers with the same enthusiasm. About 50 years ago Kline started a life list of the bird species on his farm. The list starts with a pied bill grebe sighting and one of the last entries being an osprey. Today, with the help of his family, the list has grown to about 200 species. “I’ve never seen the Grand Canyon,” Kline said. “I have no desire to; there’s so much to see at home.”

Organic Valley is committed to ethically made products and the care these small family farms give to the land, the animals, and the products that come from those animals is unique. Organic Valley farms never use toxic chemicals; only sun, grass, soil, and rain.

Farmers take part in several eco-friendly practices, like using solar and wind energy, but it’s also the little things like walking the fields to save a bird’s nest that are truly special.