When most people hear the word “farmer,” the first image that pops to mind is usually of a man, often clad in flannel shirt, Carhartts and muddy boots. But that image is slowly beginning to change to one of a woman driving the tractor—and making major farm decisions.

It still requires a mental shift for most of us to imagine a woman when we hear “farmer,” though. According to the 2012 USDA Census of Agriculture, 30% of farms reported having a woman farm operator, but only 14% of all U.S. farms name a woman as the principal operator, as in, “the person in charge of the farm’s day-to-day operations” (USDA).

So in honor of International Women’s Day, we decided to put some mythbusting on the menu. We spoke with three Organic Valley women about working together with family and spouses, influencing their communities, working to be seen as an equal or the primary decision-maker, and the wisdom women bring to this profession. 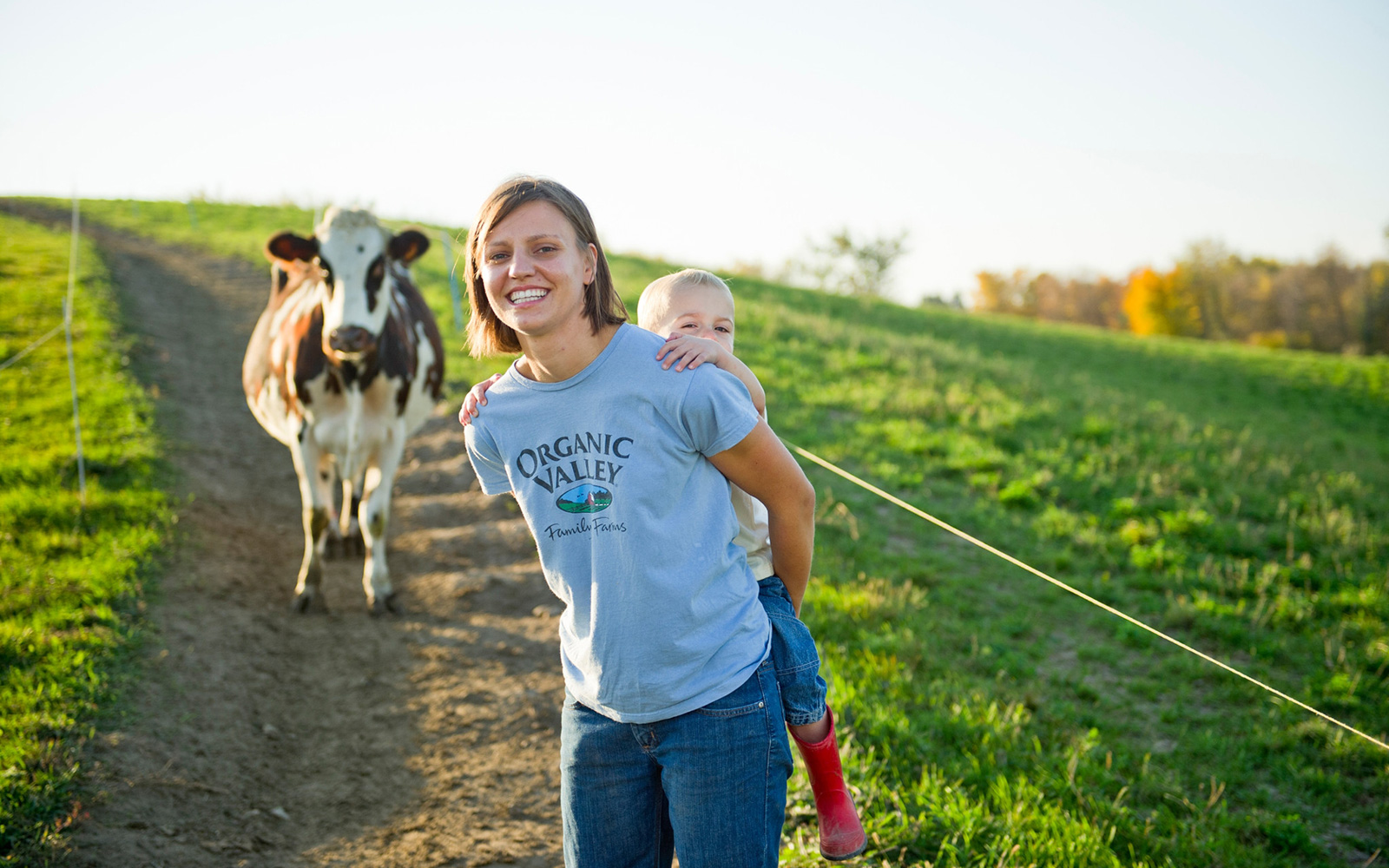 Emily Zweber gives her son a piggyback ride while leading a cow back to the barn.

Minnesota farmer Emily Zweber’s favorite mythbusting activity is visiting school classrooms to talk about farming. “One time I visited a school in Minneapolis on dress-as-a-farmer day. Students were wearing cowboy hats, chaps and overalls. Then I showed up in my Organic Valley t-shirt and jeans and said, ‘My name is Emily and I’m a farmer.’ It was a great way to start a conversation that farmers aren’t just men in overalls. I love being able to make the point that there’s gender diversity in agriculture.” 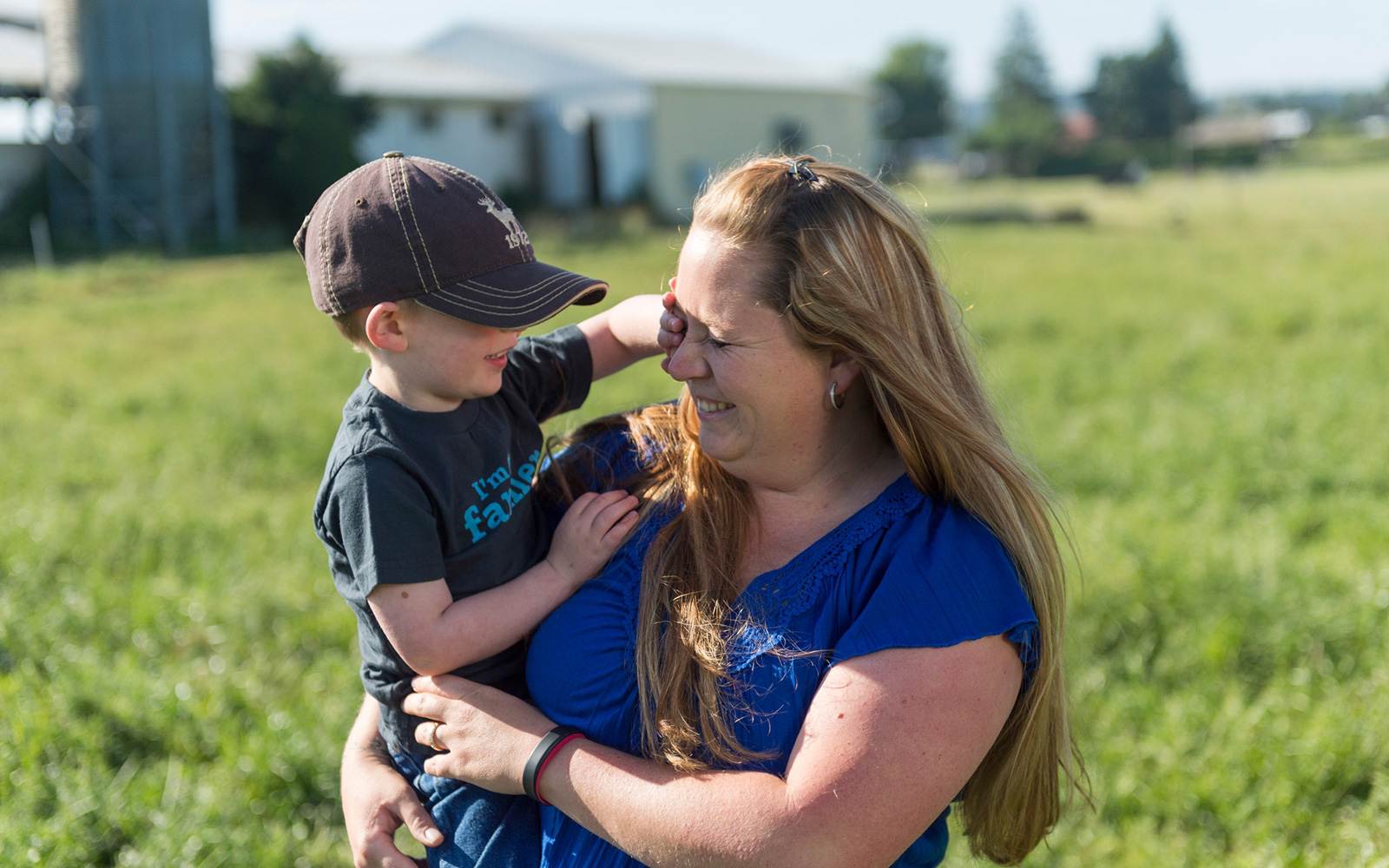 Melissa Collman laughs as her son covers one of her eyes with his hand.

Melissa Collman, from Oregon, knows it’s a lifestyle choice as much as a vocation. “I was raised as a farmer, so this lifestyle comes naturally to me. Most women who choose this way of life do it for the focus on the family. I like that close connection with my family, my parents, aunts and uncles, my husband and my kids. We all live on the farm.”

"The wisest women are those who recognize that we don’t do this in a vacuum. There’s history and family and wisdom behind you, and you’re doing this together."

Amy Koenig, from Wisconsin, chose the lifestyle unexpectedly. “I grew up on my farm, but I had no intention of ever farming. I always did chores and was involved in my family’s farm, but that’s because we were expected to help out. I went away to college not expecting to come back, but then my dad died. I realized sooner than later my priorities in life.” 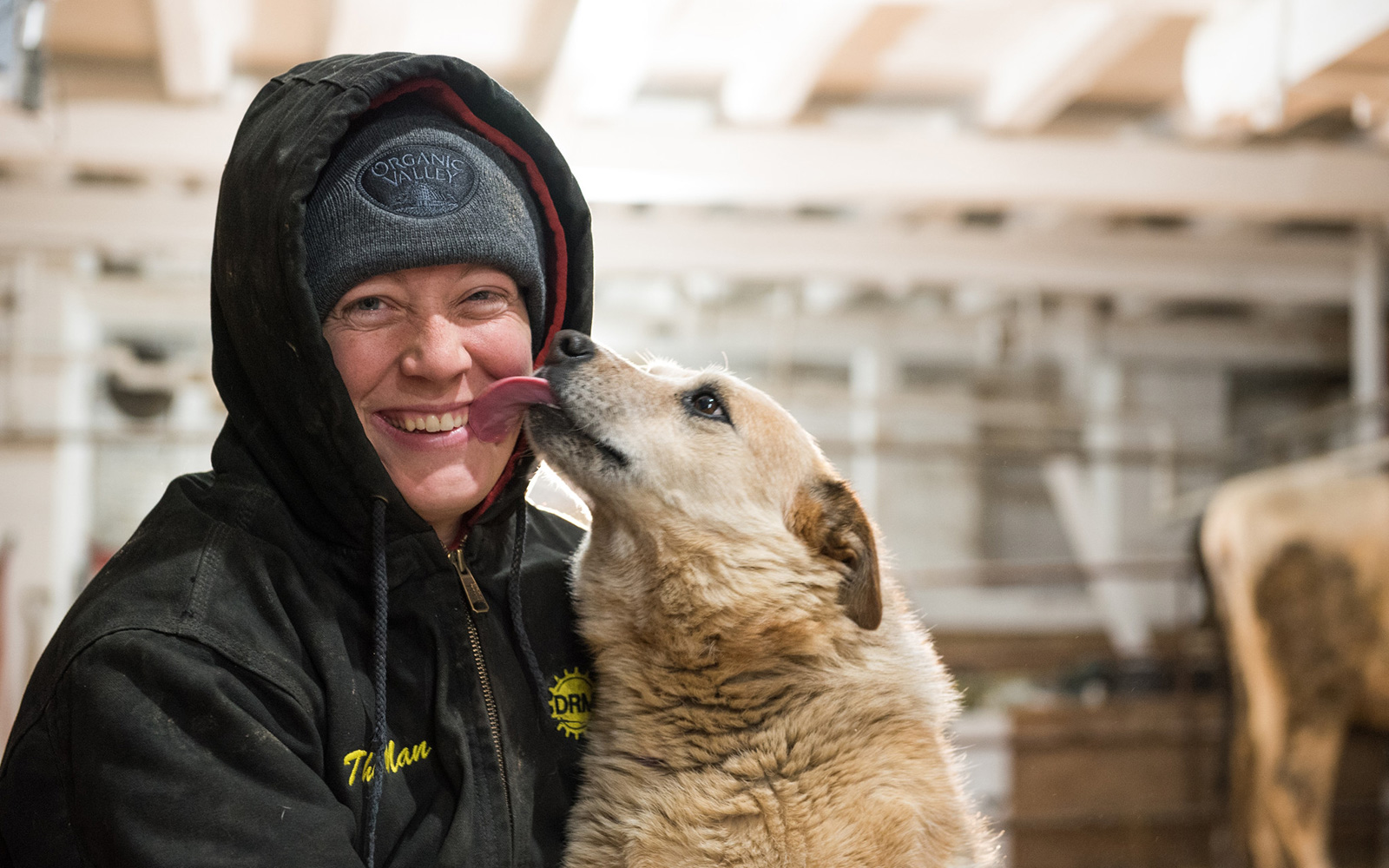 Amy Koenig gets a wet kiss from the Jumpin’ Jerseys farm dog.

Women farmers freely admit the farming lifestyle is not for everyone. They face plenty of challenges. For Emily it’s a matter of knowing her physical capabilities. “There are very few things I can’t do, but I fully admit I’m not as strong in certain ways as my husband. So sometimes I have to ask him for help. Otherwise, we split our work according to what we like. I enjoy working with the animals, so I milk and take care of calves, whereas Tim enjoys the field work and operating equipment.”

Melissa and Amy both experience challenges when it comes to being seen as equals on their farms. “People who don’t know our family, particularly salesmen, always ask for my husband,” Melissa says, “even after I point out that I’m the one who handles something.” 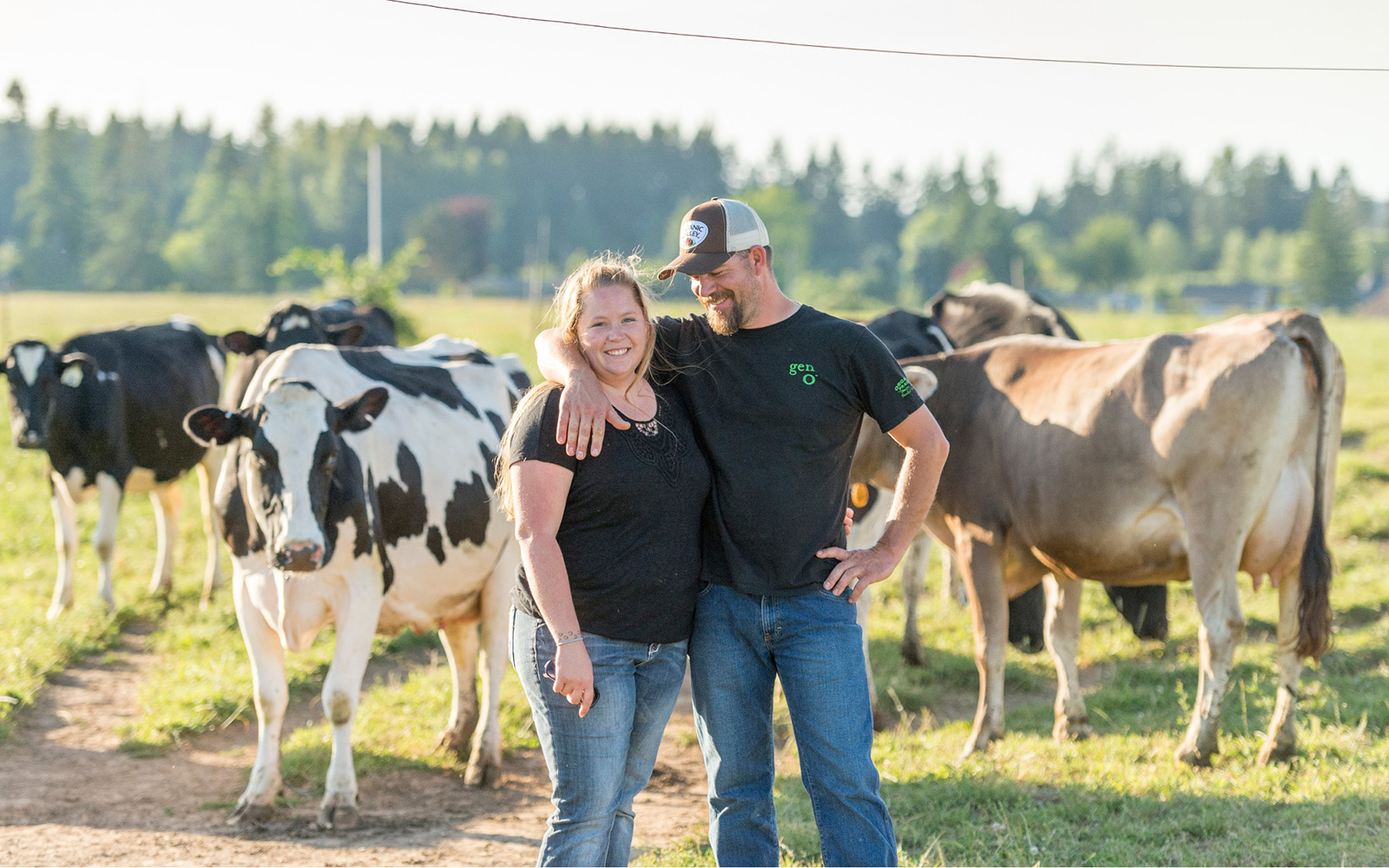 Melissa Collman with her spouse, Andy, standing in front of their herd of Holsteins.

“Being seen by others as the primary farmer is always an issue,” says Amy. “My husband [Marques] always has to point people to me. I’m lucky I grew up here with my mom as a highly respected person in the community, so I feel like I caught a break in that way. But there are still people who automatically go to Marques first. For example, we sell cattle every year, so that means some people come here who don’t know me. And I have to say, ‘No, you deal with me.’ I meet them, show the cattle and make the financial arrangements.”

Amy loves what she does and loves to see other women in farming. “Women are the fastest growing statistic in agriculture. I know quite a few women farmers. One of my friends here is the main person on the farm and her husband works off the farm. Often it’s the other way around.” 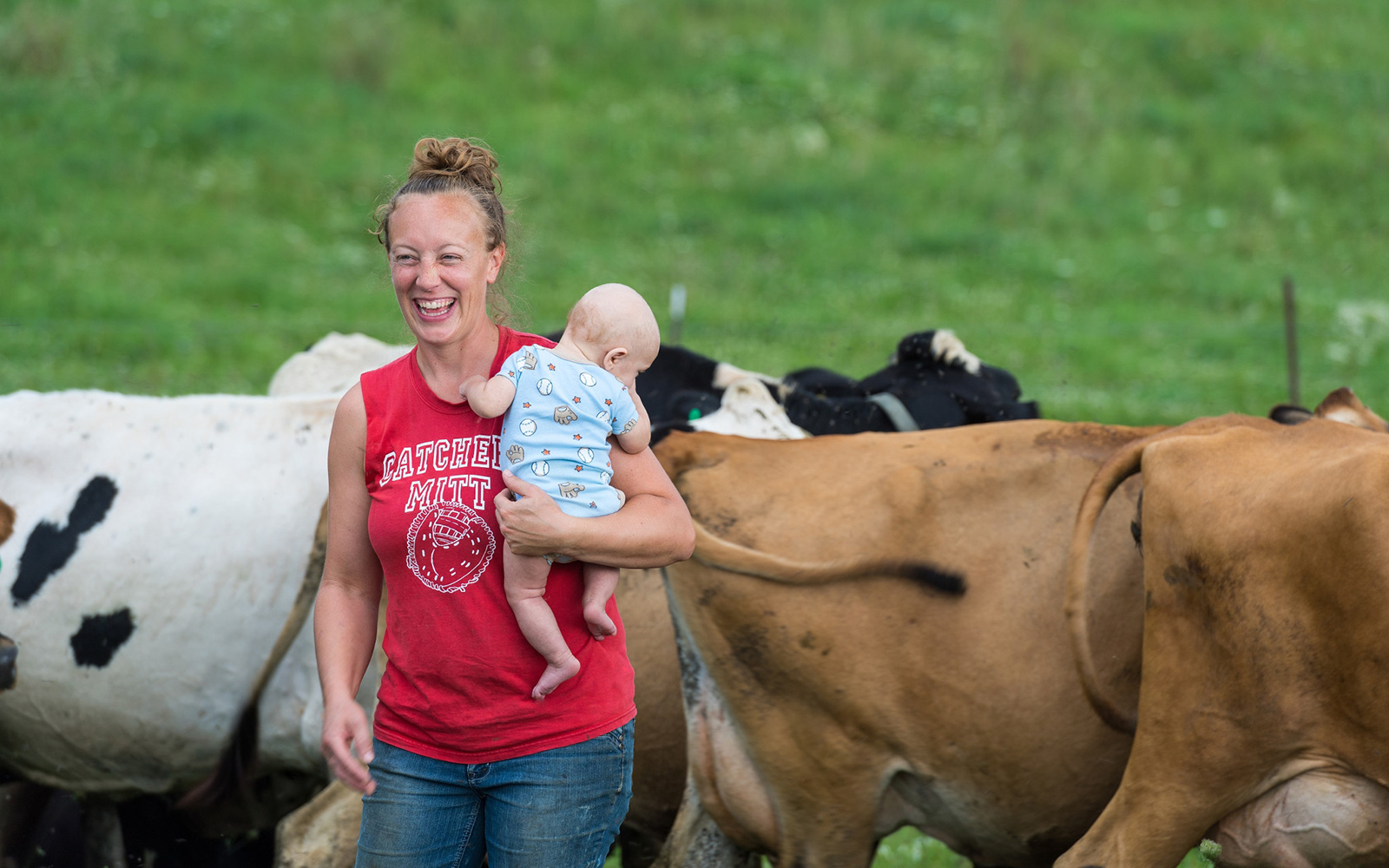 Amy Koenig holds her baby in the pasture surrounded by her Jersey cows.

“Women bring that skill set of knowing when things need help, or compassion, or just a deep breath,” says Emily. She feels that women tend to be better with animal care, and such connection with animals can often be socially reinforced. “There are cultures that don’t allow men to milk cows. A friend of mine at Land O’Lakes has the job of going around to third-world countries to help them start micro dairies so they can feed themselves and make money. When he went to Uganda, he had to bring his wife with him because they wouldn’t listen to a man telling them how to milk a cow. We have mammary systems, cows have mammary systems, we understand that!”

Amy agrees wholeheartedly. “Women notice things more quickly. They can tell at a glance that a calf looks a little off. Maybe she wasn’t quite as aggressive drinking milk as she usually is, so I need to keep an eye on her or give her extra probiotics. Women take the extra time or extra step in making sure a chapped teat is salved and wrapped instead of just dipping it and moving on. You’ll immediately take the animal’s temperature, which can tell you a lot. Many times that doesn’t occur to a man.” 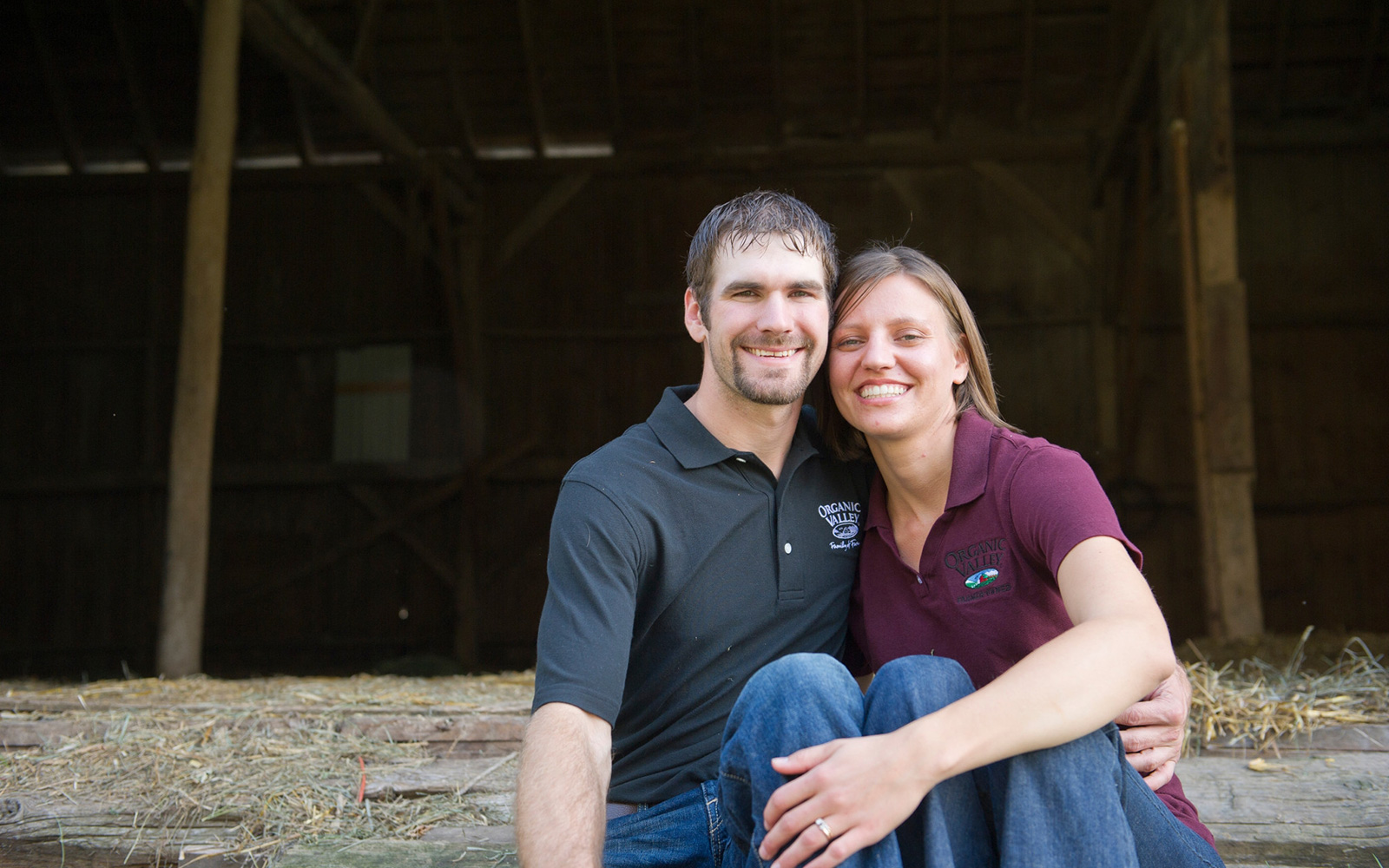 Emily and Tim Zweber are true partners on their farm, sharing the work and supporting one another.

Emily is proud to be a farmer and work with a husband who treats her as an equal. “That’s the way it’s always been on this farm. Tim’s mom and dad were great role models of that. And I love it that our children see that. It’s not lost on them.”

“I have three daughters and a son,” says Melissa. “They help out and we pay them for it. My daughters, as young women, are learning they can work just as hard as a guy and still have value.”

That example goes a lot further to the more than 500 people, mostly schoolkids, who visit Melissa’s farm every year. “Education is the most satisfying work I do. It means even more to me as a woman and as a mother of three daughters that when we have kids on the farm, they don’t just see men doing the work. They see they have choices. Little girls come up and ask me if they can be farmers, too, and I say, ‘Absolutely, if that’s what you want!’” 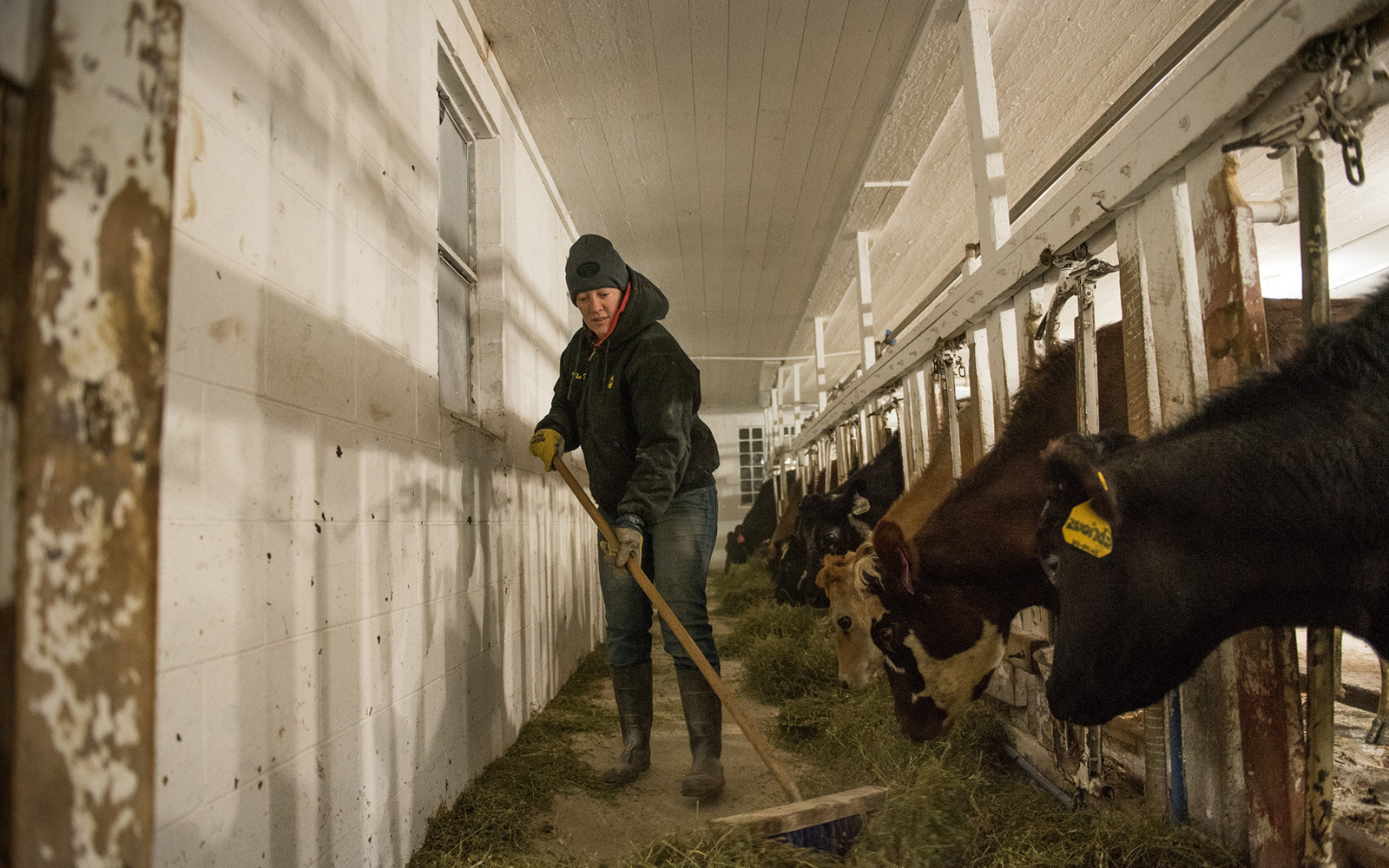 Amy Koenig gives her cows some hay during milking.

“Women play a much bigger role in ag than they’re given credit for,” Amy adds. “but I think we’re making headway. For instance, I wouldn’t have gotten some of the USDA Farm Service Agency (FSA) loans I needed to buy the farm from my mom if they hadn’t been designated specifically for women farmers. Unfortunately, we are included in the ‘socially disadvantaged’ loan category. I think they could think of a better term than that!”

Amy’s hard work was recognized in 2015 when she won Sauk County, Wisconsin’s Outstanding Young Farmer Award and was second runner-up statewide, and then again in 2017 when she won the county award again and was first runner-up statewide. These awards are given to farmers who make outstanding contributions in agriculture, soil and water conservation, plus contributions to their community, state or nation. “They’d never given that [award] to a woman farmer before,” says Amy. “I’d like to see more of that recognition of women overall.”

Melissa rounds it up nicely when she says, “The wisest women are those who recognize that we don’t do this in a vacuum. There’s history and family and wisdom behind you, and you’re doing this together. Your wisdom comes from seeing the value in that to your and everybody’s advantage.”