From the very beginning, turkeys have been part of the Thanksgiving feast.

In the autumn of 1621, Edward Winslow wrote that William Bradford, Governor of Plymouth Colony, “sent four men on fowling, that so we might, after a special manner, rejoice together after we had gathered the fruit of our labors.”

Bradford himself fleshed out the details of the feast shared by the Pilgrims and Wampanoag, writing that “besides waterfowl there was great store of wild turkeys, of which they took many.”

Today, we take more from our “great store of turkeys” than Bradford or Winslow could have imagined. About 46 million turkeys end up on our Thanksgiving tables each year, according to the University of Illinois Extension’s Turkey Facts.

And nearly all of those turkeys are birds neither Bradford nor Winslow would have recognized. Instead of a sleek black/brown bird able to forage, fly and mate, we now have large turkeys bred to grow abnormally fast and to have so much white meat that they can barely stand up, let alone fly. To add insult to injury, these poor turkeys cannot mate the old-fashioned way; without artificial insemination, they would die out immediately.

Instead, these birds live out their lives in cramped industrial confinement facilities. Shortly after hatching, they are de-beaked and de-toed so that they won’t fight and injure each other while crammed together by the thousands. And in these unhealthy, unnatural conditions the turkeys never see the sky, breathe fresh air, peck for insects in the grass, or fly up to a roost at night.

Knowing how most turkeys are raised is enough to put anyone off their Thanksgiving meat course.  But you don’t have to swear off turkey! 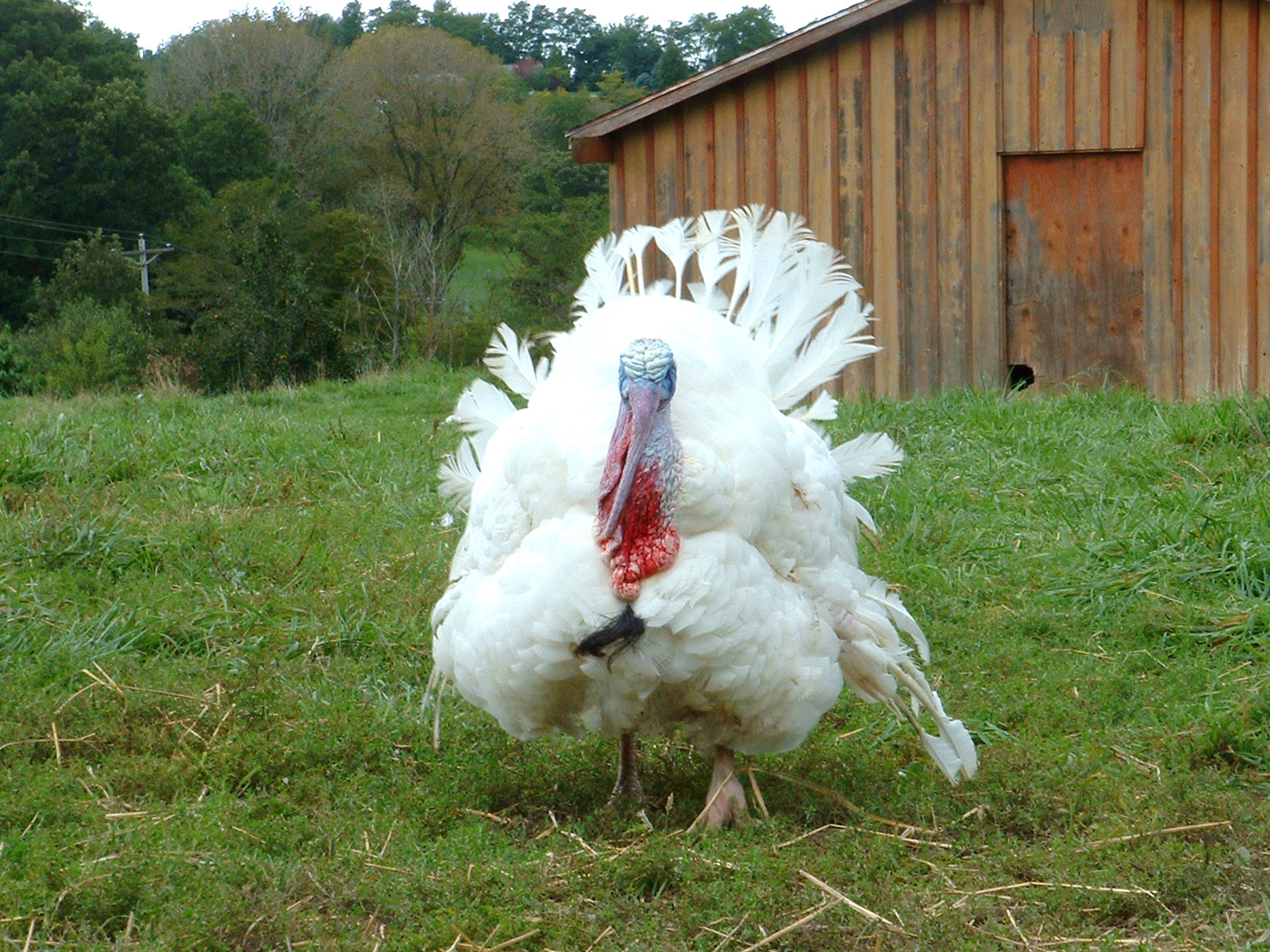 A Broad-Breasted White turkey pictured on pasture on an organic farm.

“There is a conscious way to eat animal foods,” says Annie B. Kay, an integrative dietitian and yoga therapist. She says we don’t need much meat to get the important nutrients it offers, including omega-3 fatty acids and certain minerals that are difficult to get in a vegetarian or vegan diet. Kay says that what kind of turkey you buy— conventional, organic, local, free-range, pasture-raised—has critical impacts on the animal’s health and welfare, our planet’s health, and your own health, including the health of your microbiome.

Luckily, more farmers are responding to consumer demand by raising certified organic turkeys that get exercise, eat un-medicated organic feed, and enjoy life. Some are also raising heritage breed turkeys such as Bourbon Red, Spanish Black, or Narragansett, which the Wampanoag and Pilgrims would have recognized as close cousins to the turkeys they enjoyed at the first Thanksgiving.

These birds are more expensive, but as with cars, shoes, eyeglasses, and most other things, you get what you pay for. When you pay up for a humanely-raised, certified organic turkey, you get a healthy bird that lived a good life and whose care and feed did not pollute the air or water. And because local farms tend to use small-scale processing facilities, meat from small processors is far less prone to contamination based on meat recall statistics from the USDA.

While human health, animal welfare, and the environment are important factors when choosing your Thanksgiving turkey, for many people, the ultimate motivator is taste. When cooked, a healthy turkey -- especially a smaller heritage breed -- is juicy and aromatic, with a richer, more wholesome and satisfying taste.

So if you want to continue the nearly 400-year tradition of enjoying turkey this Thanksgiving, seek out a local, organic turkey similar to one of those enjoyed at the first gathering. Eating one of these turkeys, in gratitude and in full awareness, is a kind of sacrament, a humble and joyful giving of thanks.

How to Find a Local Organic Turkey

You can peruse online sources such as LocalHarvest.org to find a turkey farmer near you, or order a certified organic turkey online from Organic Prairie!


Smithsonian Magazine: What Was on the Menu at the First Thanksgiving?

Annie B. Kay’s website (quotes are from personal communication)