Friendsgiving Dos (There Aren’t Any Don’ts)

While Thanksgiving might still be steeped in tradition, Friendsgiving -- a Thanksgiving with guests chosen simply because you enjoy their company -- is where you can celebrate great friendships with a delicious organic spread, or even break from traditional Thanksgiving fare, if you like.

An all-vegan spread? Summery strawberry pie? Fried chicken? Sure, why not!

Even for those who love to cook, turkey can be kind of predictable. For many years, that was my logic for eschewing the whole-bird route altogether.

When I moved across the country in my 20s, I was too broke for the double-whammy of Thanksgiving and Christmas flights back home within a month of each other every year. And if I had anything to be thankful for, my presence wasn’t really expected. My family isn’t known for their culinary prowess, no one watches football, and there weren’t any small children or babies yet. It was an ideal time to carve out my own unique Thanksgiving identity. While I had plenty of friends with family nearby or who did go home for the holidays, I began gravitating toward fellow “holiday orphans” and graciously welcomed them into my apartment. The more the merrier!

Although Friendsgiving is often associated with those in-flux, tight-budget years, it can be a lot of fun to revive the event as we get older, gain partners and raise families.

Read on for my best tips for hosting a fun and meaningful Friendsgiving. 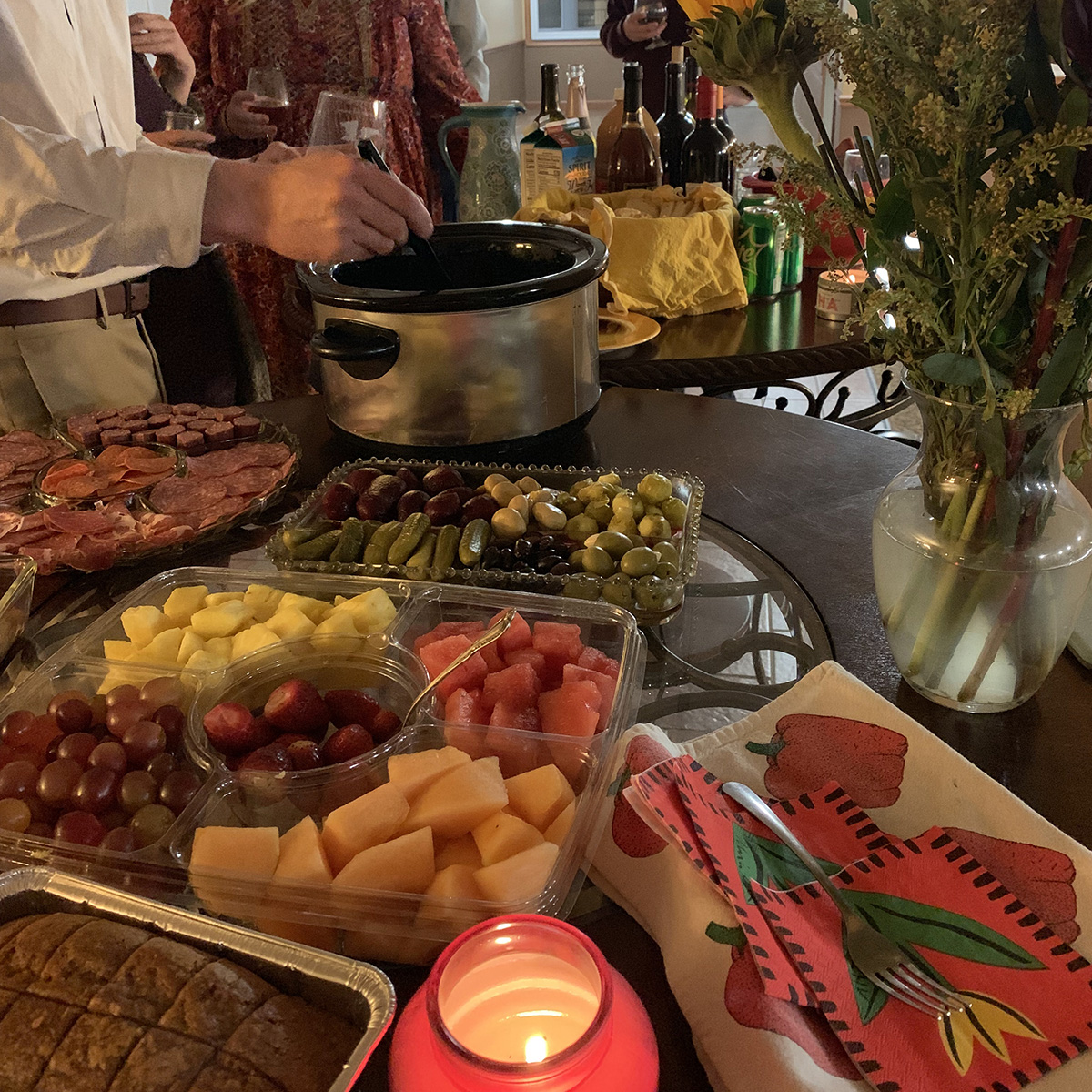 The first rule of Friendsgiving: It’s an ultimate potluck opportunity, and store-bought is A-Okay.

Many of my loved ones happen to be vegetarian, so I would never say no to a vegan pumpkin pie made by a local food truck. Marathoning Friends reruns had never been so fun. That’s right, you can have the TV on while eating at a Friendsgiving.

Or why not use the special-occasion-ness to spark meaningful conversations and make connections with new friends—or learn something new about people you’ve known forever? Download these Thanksgiving conversation-starter cards to get things flowing. If your Friendsgivings include children, include them in the conversations too. You might be surprised at the profound things that come out of kids’ mouths when they’re asked a meaningful question and adults sincerely listen.

Rule #2: Choosing organic ingredients is a wonderful way to show you care—both about your friends and the planet.

It’s a gift to be able to serve friends food that wasn’t raised with pesticides or antibiotics, and if you want to cook an organic turkey, it’s worth the effort. By using the rough one pound per person calculation, a typical 13- to 16-pound organic turkey will stretch pretty far, especially with plenty of sides. (Here are some tips for choosing and thawing an organic turkey if you go that route.)

You can even be conscientious about organic when cooking for a crowd on a budget. Look at the “Clean Fifteen” and “Dirty Dozen” lists for help prioritizing which products to buy organic. For example, if you need both potatoes and sweet potatoes but can’t buy organic for both, spring for the organic Russets or Yukon Golds since non-organic taters tend to contain more pesticides than non-organic sweet potatoes. 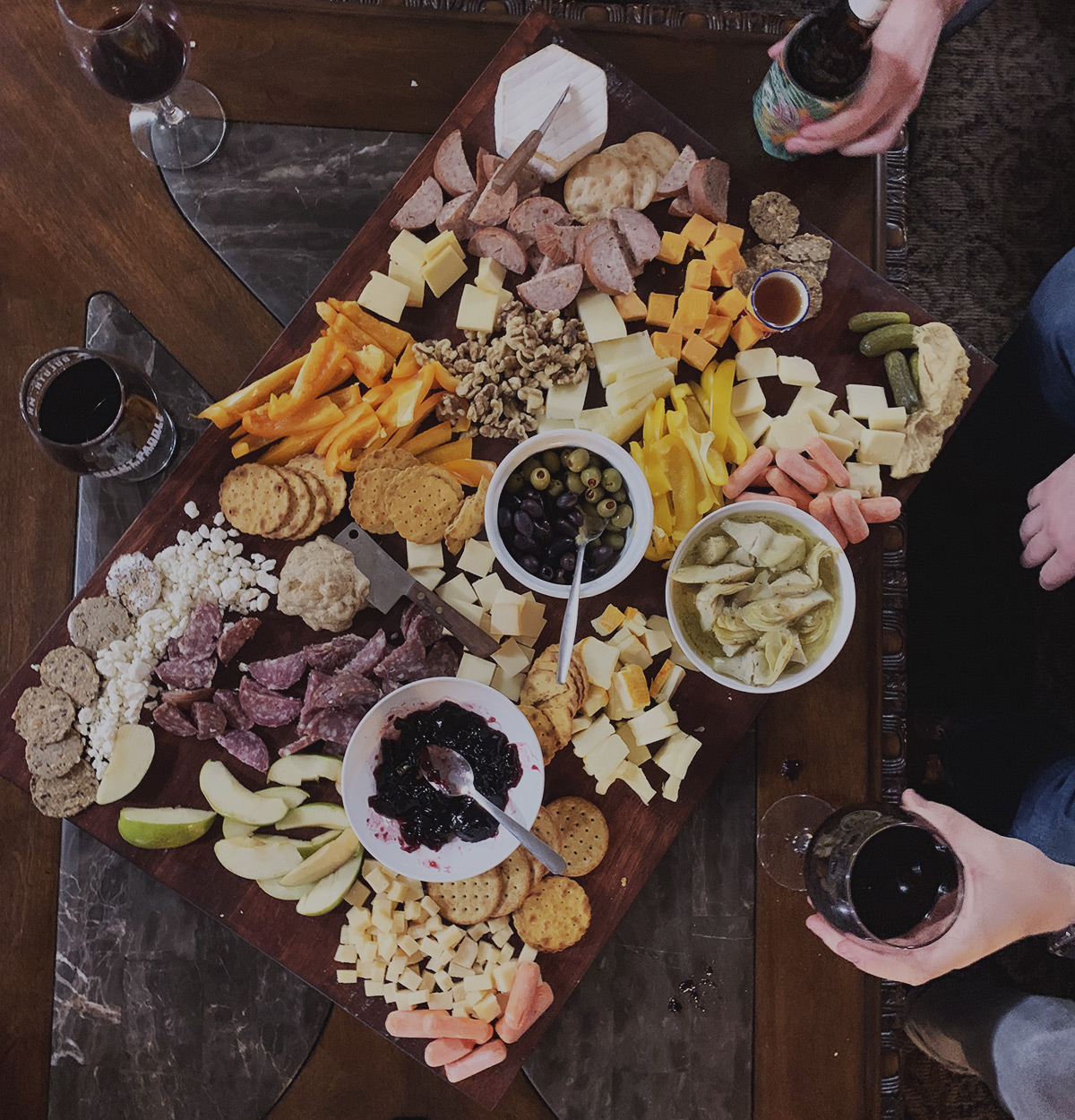 Freeing yourself from tradition isn’t necessarily a time-saver. One Thanksgiving, I attempted to make bisteeya, a sweet-and-savory Moroccan meat pie, traditionally filled with pigeon and dusted with sugar. I boiled turkey legs for what seemed like eternity to render the dark meat tender enough to shred. It worked in the end, but I had no idea that turkey drumsticks aren’t the same as chicken legs; thin, bone-like cartilage is splayed throughout the turkey meat, like spokes in an umbrella. Needless to say, even though it was delicious, it wasn't any less burdensome than roast turkey with all the fixin's.

Whether your table is filled with traditional dishes or local take-out, as long as you're connecting with people you care about, you're doing it right.

Rule #4: You don’t even have to host Friendsgiving the fourth Thursday of November!

Once, I used Thanksgiving and the Friday afterward as an opportunity to take my first solo trip. If you’re lucky enough to have a job that gives paid holidays off, it’s one of the best times of year to travel internationally (even just to Canada). It’s considered off-season, so you won’t be subject to peak summer vacation or end-of-year holiday rates or crowds.

I once used the elaborate 10-plus ingredient mole negro I learned in an Oaxacan cooking class as an excuse to haul pillowcase-sized bags of hard-to-source dried chiles back home. I then managed to recreate my newly learned recipe and served turkey mole to grateful guests at an informal dinner party the week after Thanksgiving.

Or push your Friendsgiving out even further to January for something fun and social to look forward to in the darkest part of winter, after the jolly holiday season feelings have waned.

Or if you and your friends have kids, host it earlier in November when the weather is still nice for the kids to run and play outdoors while the adults reconnect and enjoy each other's company.

Traditional Thanksgiving images may still loom large in the collective imagination. No matter if real family gatherings have never resembled a Norman Rockwell painting, there’s a lot of pressure to provide an idealized meal. But anyone can get creative with their own Friendsgiving. Make it your own, and most of all, use it as a time to reconnect with people who matter most in your life.

Turkey may be the star, but admit it: the sides always steal the show.

These fall side dishes are easy to whip up and sure to please, giving you more time outside the kitchen with your loved ones. 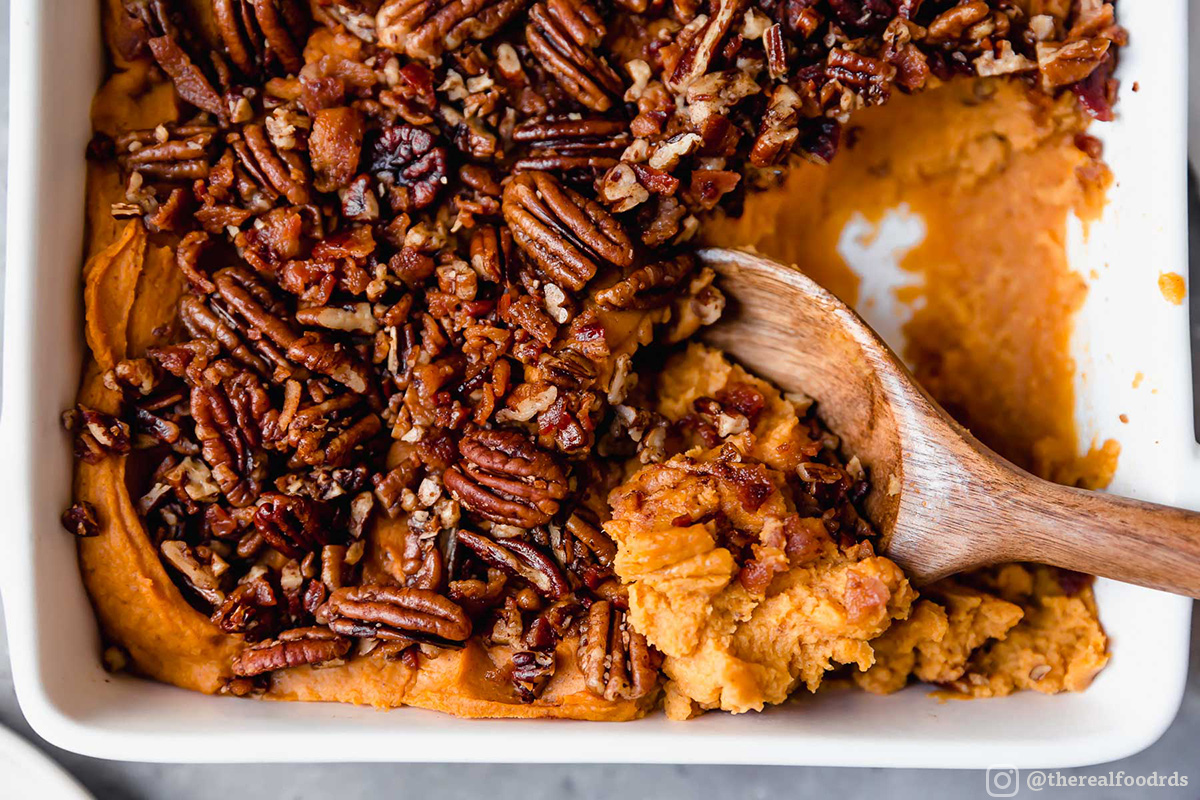 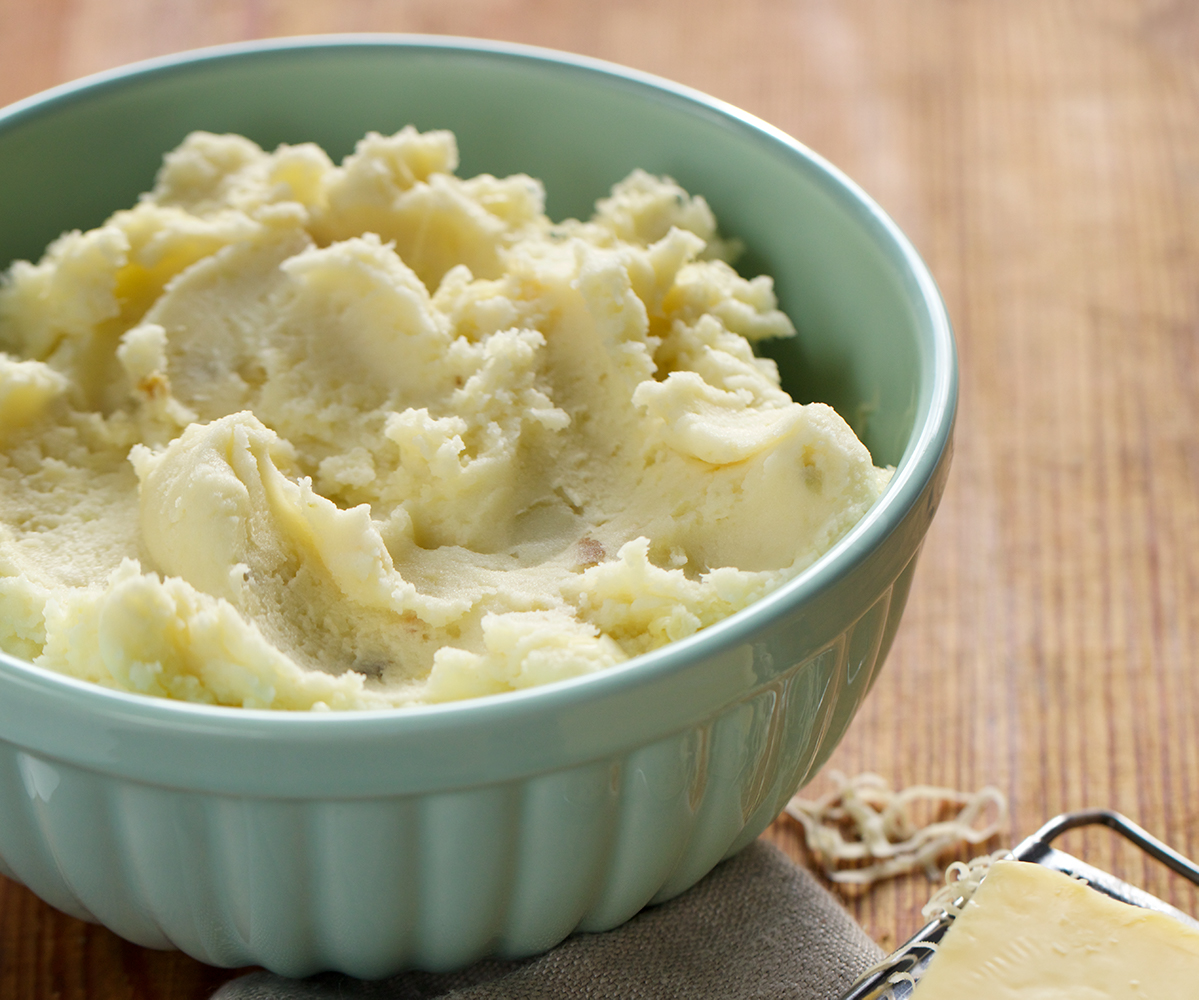 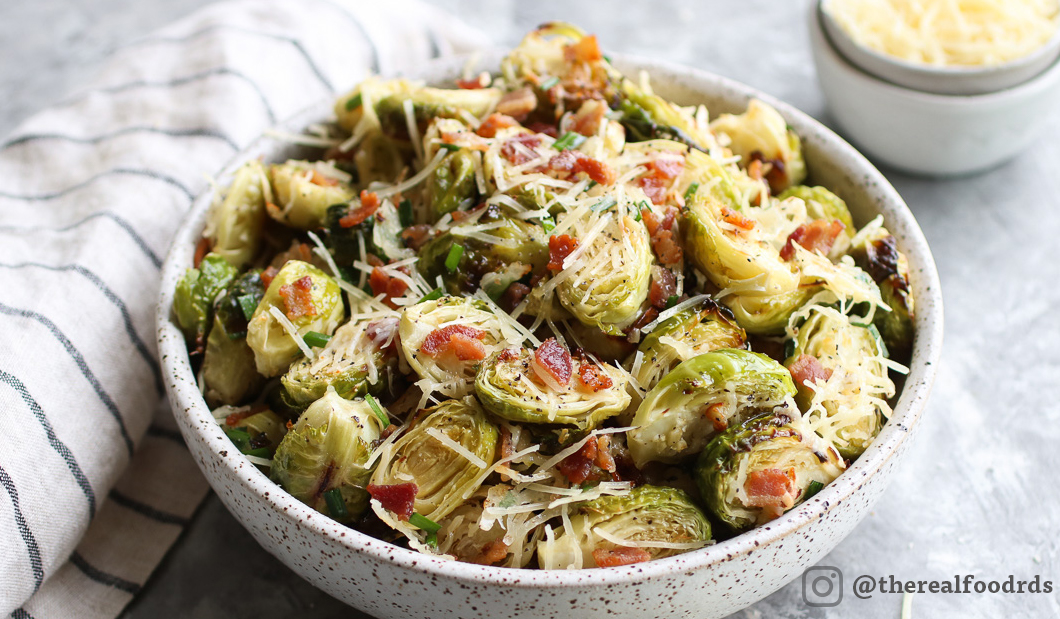 No unappetizing sprouts on your table! We bet these Parmesan Roasted Brussels Sprouts with crispy bacon will tempt even the pickiest Thanksgiving palates.