The Story of Seb, Spud, and Spring Brook Farm

Lyle “Spud” Edwards was 24 when he began farming in 1976. Twenty-five-year-old Sebastien “Seb” Latraverse started farming, in a sense, about 12 years ago when he visited Edwards’ 55-cow organic dairy farm in Vermont during evening chores. That was it—Latraverse was hooked on farming.

Latraverse made regular visits to the farm from his home in Montreal. He immersed himself in chores and whenever he left he couldn’t wait to get back to the farm.

Now, Latraverse is taking over the farm that he fell in love with as a child. Farming wasn’t in the cards for others in Edwards’ family and Latraverse’s eagerness means the survival of another small organic family farm!

“I have to face reality,” said Edwards, who is almost 70. “I’m in good health and still going to work. At some point you are going to break down and you have to be ready for it. So many farmers my age have no one to give their farm to.” 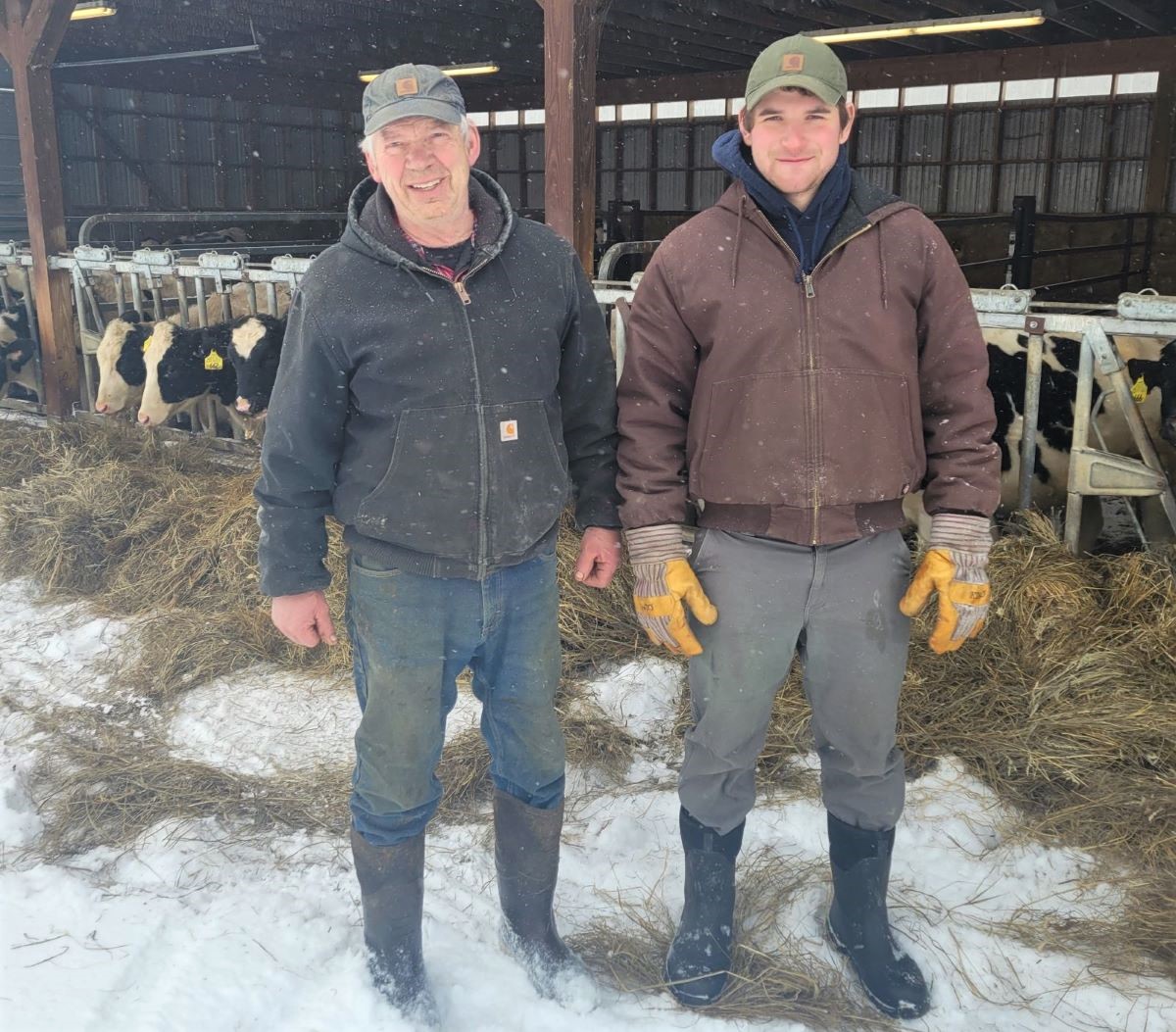 Lyle Edwards and Sebastien Latraverse are shown on their organic farm in Vermont in January 2022.

The number of dairy farms in Vermont decreased by 69% over the past 24 years, according to a 2020 Vermont Department of Financial Regulation report. Organic farms represent 29% of all dairy farms in Vermont. Many farms are consolidating and the number of small farms (fewer than 200 cows) in Vermont decreased by 35% from 2011-19. During that time, the number of large dairy farms (700 cows or more) increased by 83%, according to the report. However, those like Edwards and Latraverse—who deeply respect animals, Earth, and the farm community—are proof that farms can thrive.

When the opportunity arose, Latraverse jumped at the chance to take over Edwards' farm.

“I always thought of what I’d do with the farm if I owned it,” Latraverse said. “Spud gave me freedom to think on my own and always made me feel like I could run the farm myself.”

Latraverse is fluent in French and fluent in all things farming, including business and economics.

“He’s very mature,” Edwards said. “He’s pretty amazing. He’s super observant which makes him ahead of a lot of people. I tell people he’s a better farmer than I am. He’s a mechanic, he’s a good carpenter, he can weld, he’s well-rounded.”

Edwards isn’t ready to step back completely. He says he will farm until his body decides it can’t anymore and even then there’s a good chance he will help … with his words.

“Sometimes we spend an hour after chores chitchatting,” Latraverse said. “I’ve heard the stories a hundred times and it doesn’t get old.” 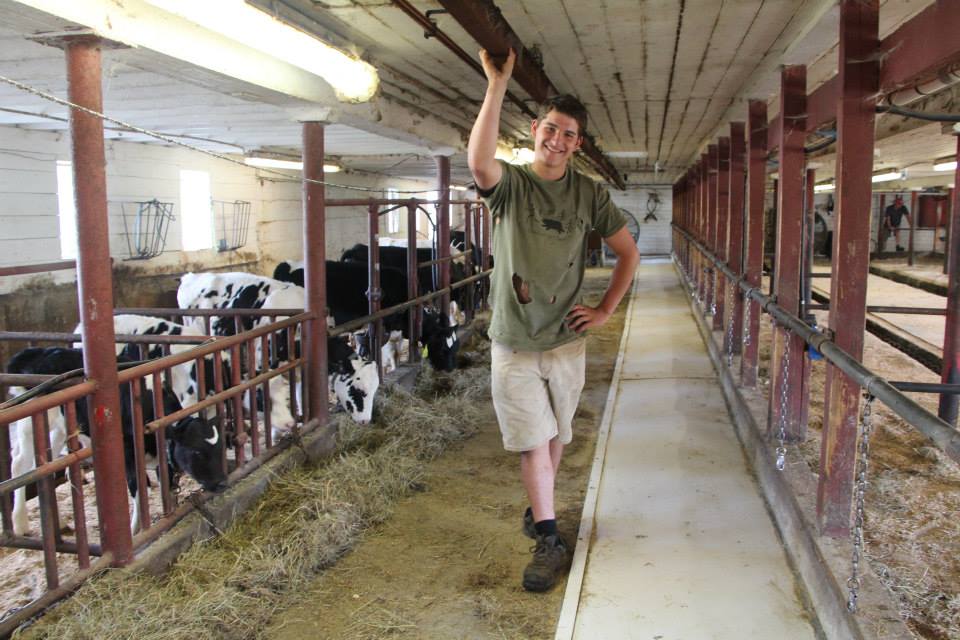 Sebastien Latraverse stands in the barn at the organic farm he is purchasing in Vermont.

Latraverse, age 25, is the first in 10 generations of his family to farm. An avid outdoorsman, he hiked part of the Appalachian Trail after graduating college with a farm management degree. He went to work on a college roommate’s farm where they built a state-of-the-art barn; another skill to add to his growing list.

“On a small farm you touch everything. You have your basics, but every day there is something new you could do,” Latraverse said. “You get exposed to everything, like one day you are fixing a barn and another day, fixing equipment.”

He built a home between farm chores and continues to work carpentry. “It’s hard to purchase such an expensive enterprise at a young age,” he said of the farm. “Could I make it without the extra work? Yes, but this is expediting the process.”

“I was always into the natural movement. I hate to see development take over forests and farmland. I always ate organic. The values fit in with what I believe,” Latraverse said.

He continues to upgrade. “I like that every day you can really improve your farm—it’s a never-ending goal,” Latraverse said. 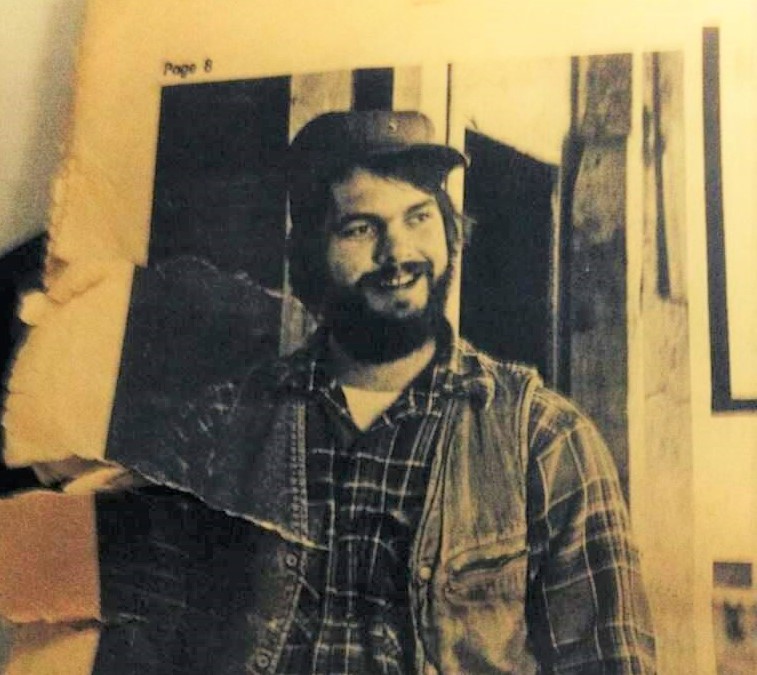 Lyle Edwards was featured in a farm publication at age 24 when he started farming.

Edwards, whose love of potatoes earned him the nickname “Spud,” worked as hard as Latraverse did at his age. Their stories have other similarities.

Edwards didn’t grow up on a farm, either, but worked on farms in high school. His dad, in fact, was allergic to cows!

He recalls having toy cows and thinking about cows all the time in grade school. “I’d put my head on the desk and dream of cows,” he said.

Edwards said he has all that he needs and looks forward to what’s down the road for the farm.

“I’ve had fun doing it. I like it as much as when I started,” he said, adding that he doesn’t even mind getting up every morning at 4.

Latraverse is expected to buy out Spring Brook Farm in two to three years. The farm boasts upgraded timber frame barns built in the late 1800s, pastures backdropped by mountains and woods, and the namesake stream that supplies the farm with water.

The farmers will continue to work side by side. “It takes both parties and we have to be committed to this transition,” Latraverse said. “The older generation has to be involved but also has to let the younger generation make decisions.”

Organic Valley cooperative was founded by seven farmers during the farm crisis of the ‘80s. We are now owned by nearly 1,800 family farmers who are committed to organic, sustainable methods of raising food that are good for people, animals, and the planet. Our mission is to create a stable economic model for organic farmers and we can’t do it without support from consumers like you who believe in what we do.

We are thrilled to see Edwards and Latraverse working together to further the co-op mission.

“You’ve got to want to do it,” Edwards said of farming. “It’s hard to believe I’m still doing it and loving it.”

There’s also no doubt Latraverse wants to farm, too. “The harder the work is, the more I like it,” he said.

When asked separately what their favorite things are about farming, Seb and Spud had strikingly similar answers:

"I like to watch cows stare off into space and chew their cud; it’s so relaxing. I could watch them all day."

"I could feed cows all day. I love seeing them go after feed and munch on hay."