Mary Mallonee laces up her hiking boots and grabs her wooden walking stick ready for her daily pasture walk. The 77-year-old former dairy farmer can identify all the wildflowers and grasses growing on her 65-acre organic dairy farm in Washington state’s Boistfort Valley.

“I walk these pastures every day and know the contours of the land as well as my own face,” said Mary, who purchased the dairy farm with her husband John over five decades ago.

Scattered among a canvas of prairie grasses, blue camas, and wispy Queen Anne’s lace, the main attraction every spring is the rare Kincaid’s lupine, a native perennial with creamy lavender flowers that is on the federal endangered species list.

“We have counted several thousand lupine plants on our 5-acre pasture where we continue to graze our dairy cows,” Mary said. “As stewards of this land, we are helping to provide a sustainable habitat for both our herd and the threatened wildflower species.” 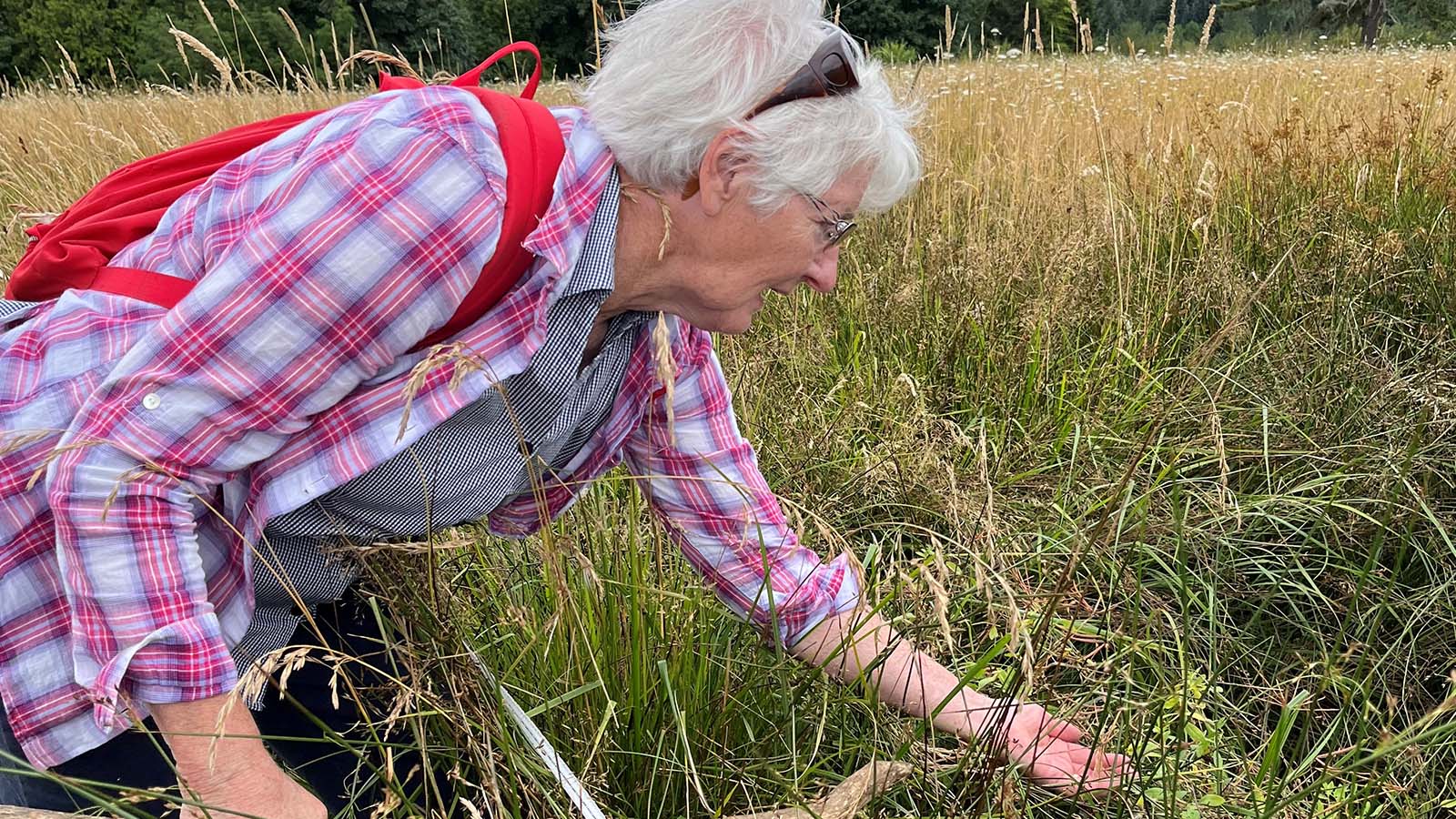 Mary Mallonee walks the field on the family farm in Washington.

In 2004, the rare Kincaid’s lupine was discovered growing on the Mallonee farm by a Washington Department of Natural Resources employee who happened to be cycling past the farm.

“If our farm wasn’t organic, the lupine would not be flourishing here,” said Maynard Mallonee, third-generation dairy farmer and Organic Valley co-op member.

The Mallonee farm boasts the largest concentration of Kincaid’s lupine in Washington and represents the northernmost range of the flower. The rare species is normally found on the dry upland prairies on the western side of the Willamette Valley in Oregon.

“Our farm became organic back in 1998, and I believe that kind of practice has made our land fertile and possible for a rare plant such as the Kincaid’s lupine to thrive,” Mary said. “Our pasture is one of the rarest prairie ecosystems in North America, and it is our duty to protect it.”

The Mallonee family has partnered with the U.S. Fish and Wildlife Service to protect the rare Kincaid’s lupine on their farm. Wildlife biologists visit the farm regularly to collect seeds to establish other lupine populations throughout the state.

“We can’t do this work alone,” said Erin Gray, Fish and Wildlife biologist. “The Mallonee family has successfully worked to manage their pasture while protecting a rare species. We need public-private partnerships to do this important work, and they have been wonderful ambassadors and partners.”

In addition to helping to collect seeds, the U.S. Fish and Wildlife Service also provides the family with technical assistance, helps with a grazing management plan and weed removal, and helps fund a project to provide watering facilities that will benefit the cattle and the lupine.

“The benefits of their conservation efforts will spread beyond their small farm for future generations to enjoy this rare wildflower species,” Gray said.

Cows at the Mallonee family farm in Washington.

“The same practices that allow our dairy cattle to thrive have made our pastures an ideal home for the lupine,” Maynard said. “We have shown that by using rotational grazing, the lupine has not only survived but has increased on our farm by 30% during the past 12 years.”

The herd grazes in the same pasture along with grasses and Kincaid’s lupine, and Maynard and his son manage the prescribed grazing when the grass is more plentiful and the lupine is not in bloom. Cows are not allowed on the pasture from April 1 to Aug. 1 when the lupine is in full bloom.

“Grazing can save things,” Maynard said. “The cows graze on plants like grasses, legumes, and forbs (flowering plants) so there is no need for chemicals.”

Kincaid’s lupine can be found in Oregon, too. The endangered Fender’s blue butterfly depends on it! The butterfly completes its larval stage in the root system to emerge as a caterpillar and feed on the flower’s leaves.

Once thought to be extinct, the butterfly was rediscovered in 1989. Fender’s blue is a butterfly that formerly thrived in the prairies of Oregon’s Willamette Valley, but during the past 140 years an estimated 99% of this native prairie has been displaced. Another threat to the butterfly is invasive species, such as Scotch broom, which take over Kincaid’s lupine and native wildflowers.

In addition to Kincaid’s lupine (Lupinus oreganus var. kincaidii), the Mallonee farm is home to other wildflower species that are found only in this protected prairie ecosystem, including:

“The recovery of a threatened species is important to protect the native prairie ecosystems that are being lost,” Gray said.

Birds and biodiversity abound at the Mallonee farm in Washington. ©Anna Campbell for Organic Valley

In the past, the Mallonees hosted Lupine’s Field Day on their farm as the lupines began to bloom. This allowed others to share in the beauty of these hard-to-find wildflowers and butterflies (if they were fortunate to spot one!). It also provided an opportunity to learn how organic conservation practices make a big difference.

“As an organic dairy farmer, we care about our animals, our soil and our biodiverse pasture,” Maynard said. “We see the connection between all living things and want to be the best stewards of this land.”

The Mallonee family’s conservation efforts are getting noticed. A PBS affiliate in Seattle will feature them in early 2023 in the series, Human Elements.