How to Make the Best Homemade Whipped Cream

Whipped cream is something we’re all familiar with. We know it’s delicious with strawberries for an easy and light dessert, it’s the best part of angel food cake, cream pies, ice cream, pumpkin pie, and the list goes on. But why are you buying cans of whipped cream when it is so easy to make? Today I’m demystifying this fluffy treat and showing you how to make the best homemade whipped cream. You’ll never want to buy it from a tub or can again!

The Star of the Show: Heavy Whipping Cream

First, let’s talk cream–because it’s the star of this glorious topping! Heavy whipping cream is used to make homemade whipped cream. My favorite kind of heavy whipping cream to use, and what I use daily at my bakery, is Organic Valley Heavy Whipping Cream.

You may notice heavy whipping creams say either ultra-pasteurized or just pasteurized on the package. The difference is the ultra-pasteurized cream will stay fresh longer than pasteurized. That’s really it, as I’ve used both types many times. They both will create the same fluffy and delicious homemade whipped cream.

Related: What’s the difference between pasteurized and ultra-pasteurized milk? 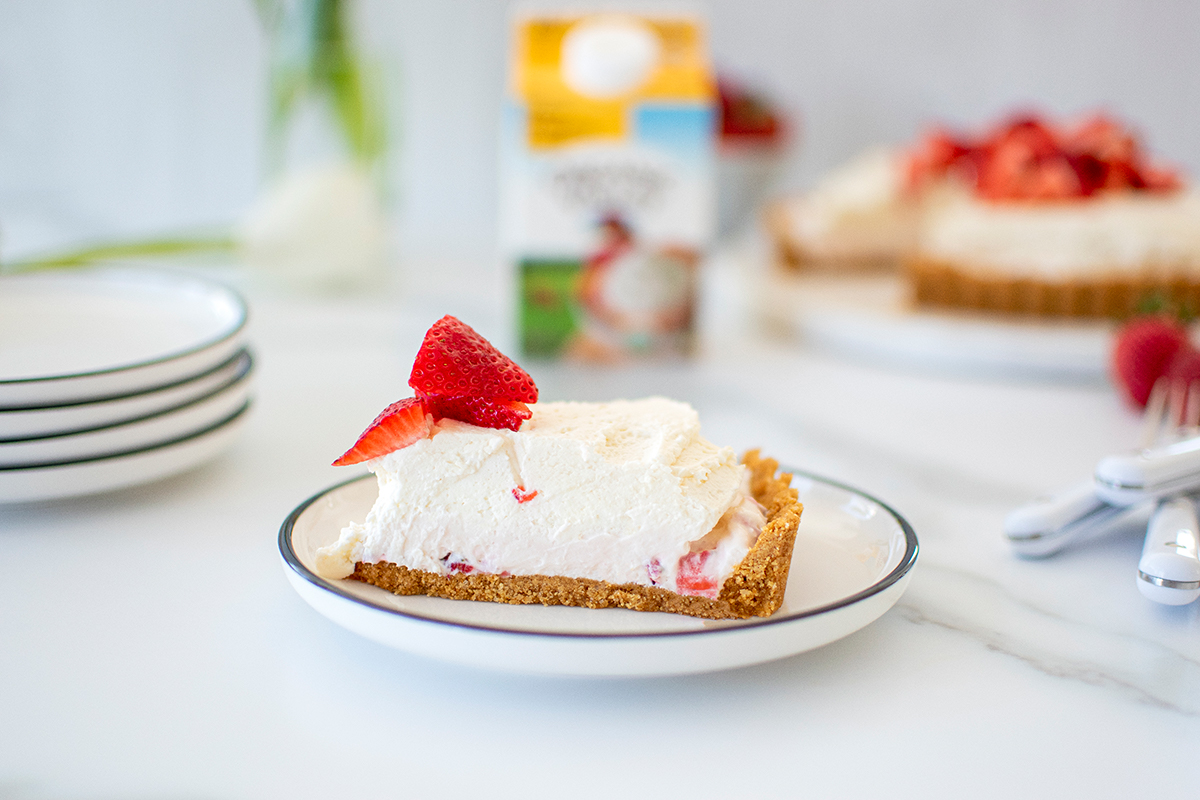 Keep It Simple, or Spruce It Up

What else goes into homemade whipped cream? Sugar and vanilla extract–that’s it! That’s why whipped cream is so easy, it only has three ingredients! With so few ingredients, quality really matters too which is why I always recommend buying organic.

But you can also have fun and add different flavor extracts besides vanilla, such as peppermint, orange, lemon, almond, and more. You can also use other sweeteners like powdered sugar, maple syrup, or honey. Whipped cream is a blank canvas, and the sweetener and the flavor can easily be swapped out for whatever you’re craving or whatever complements your dessert.

If you see cream of tartar in a whipped cream recipe, just skip it. This can be used to stabilize whipped cream, so it holds its shape longer, but it’s completely unnecessary, in my opinion, especially when baking at home. Whipped cream is supposed to be made and eaten, plain and simple. No need to make it hold its shape for hours on end. When making homemade whipped cream, make about what you’ll eat within a few days.

How to Store Homemade Whipped Cream

Whipped cream can be stored in the fridge in an airtight container. After a few days it will start to deflate, but that’s also what makes it so special. Hear me out! Enjoying homemade whipped cream is so much more delicious and also better for you as you’re not eating unnecessary stabilizers, additives, or artificial flavors. So seeing that whipped cream naturally deflates after a few days is just a sign that you’re eating the best whipped cream possible! Just use that deflated whipped cream for topping coffee or hot chocolates as opposed to desserts. 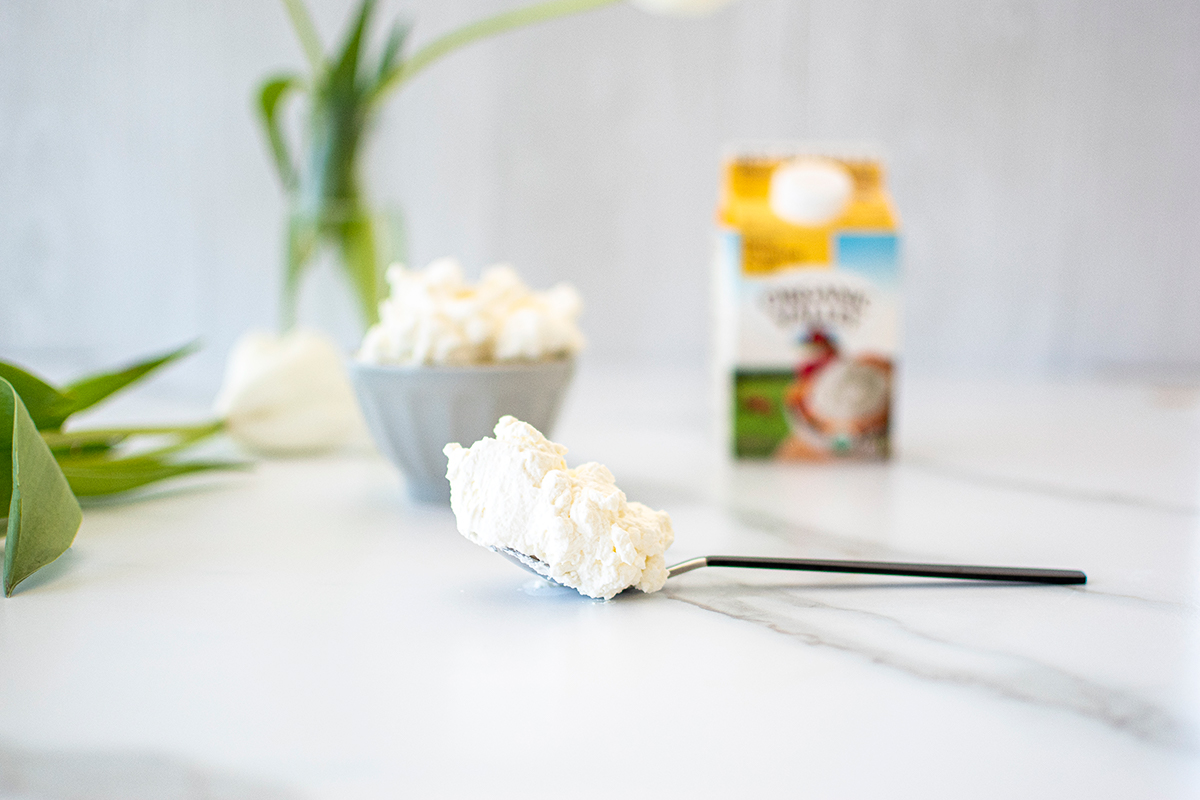 Now that we’ve covered the ingredients of whipped cream, let’s get into whipping it up!

You can make whipped cream three ways: with a stand mixer and whisk attachment, with an electric hand mixer, or by hand. I recommend the first two methods. Making homemade whipped cream by hand can be done, but I wouldn’t call it easy whipped cream! That requires a lot of stamina and strength to hand-whip it at the speed needed to create the beautiful fluffy texture we know and love.

First, add the heavy whipping cream, sweetener, and flavor to the bowl. Next, start your mixer on low speed. As soon as you notice the cream starting to thicken just the slightest, increase the speed of the mixer. The goal is to go as fast as you can without splattering cream everywhere. Keep an eye on the cream as it will thicken the longer it whips. As soon as it looks thicker, increase the speed. Continue until you are at full speed. This step is something that the kids can help watch as a fun game. How fast can we go before cream flies everywhere? Also, who can spot the cream thickening first? It is a really cool transformation to watch the liquid cream turn into fluffy whipped cream. 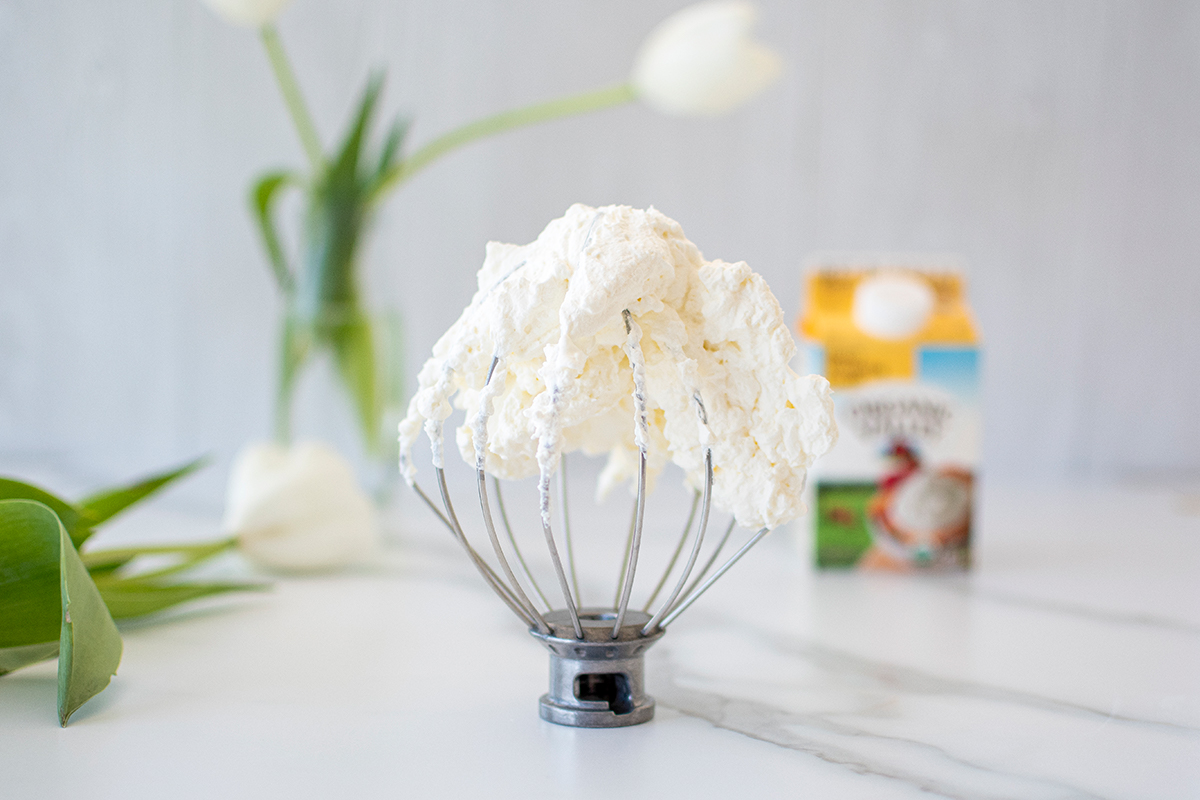 Take a Peek at the Peaks

Once the cream starts to thicken and it’s no longer liquid, it gets into the soft peak stage. At this stage, the cream will be thick and creamy looking, but it won’t hold its shape. If you’re using a recipe that calls for soft peaks, stop here.

Most of the time; however, you will continue whipping until you reach the stiff peak stage where it looks fluffy and thick. This is traditional whipped cream, and how it comes out of a can if you were to buy it at the store. When you believe you’ve gotten to this stage, stop the mixer. Look at your whisk or beaters and if the whipped cream droops or falls off, it’s not quite ready yet. Keep going! Stiff peaks mean the whipped cream is stable and it won’t fall or droop off your whisk—it stays in place. Once this happens, you have successfully made easy homemade whipped cream! This entire process should take less than 10 minutes, which makes homemade whipped cream doable every time.

Now, what to do with it? I recommend having a plan for your whipped cream before you make it. If you don’t have a plan, you can easily eat the entire bowl with a spoon (and if you have strawberries on hand, then you won’t be using that whipped cream for anything else!).

Aside from eating with a spoon or using as a dip for fruit, there are so many recipes you can make with whipped cream. Not only is it the best ice cream and hot chocolate topping, but whipped cream can be used in mousse, trifles, ice box cakes, parfaits, angel food cake, and so much more. You can replace heavy frosting with whipped cream for a light and delicious cake. Whipped cream can be folded into custard and cream cheese fillings to make no-bake cheesecakes and sweet cream pies. When using whipped cream in this way, it’s important to fold it in carefully so you don’t deflate it.

So what are you going to do the next time a recipe calls for whipped cream? Make it yourself! Grab the family, make it fun, and whip up the best homemade whipped cream with Organic Valley Heavy Whipping Cream. 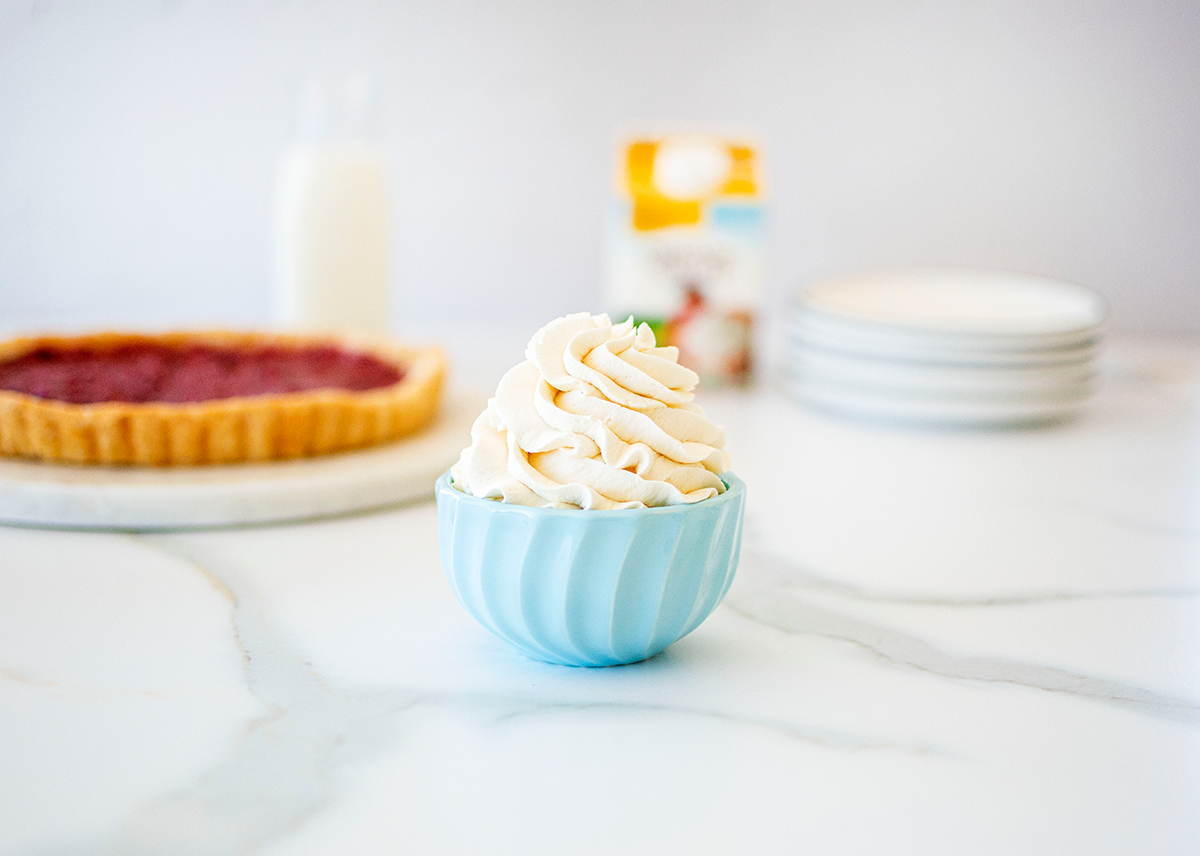 Homemade whipped cream is an easy and delicious treat to top off any dessert! You’ll see how simple it is to make whipped cream with Organic Valley Heavy Whipping Cream and a few other ingredients. Remember: With so few ingredients, they have to work hard to create amazing whipped cream, so opt for high-quality ingredients when you can.