What’s the Difference Between Pesticides and Herbicides?

Organic certification prohibits the use of toxic synthetic pesticides (among other things like synthetic hormones, antibiotics and GMOs), but the term “pesticides” can be confusing when you also hear about all the other “–cides” out there: herbicides, fungicides, insecticides, and parasiticides, for instance. What does the chemical industry—and the organic industry for that matter—really mean when it talks about “pesticides”? And what’s the difference between pesticides and herbicides? (Not to mention all those other –cides.)

We get these questions a lot here at Organic Valley, and we are strongly in favor of being well informed about the food we eat.

So, let’s talk about some of the chemicals that go into different farming practices.

Pesticides are the overarching classification for a whole host of natural pesticides and synthetic (or man-made) chemicals used in food and agriculture to kill “pests.” While most of us think of pests as creatures—insects, rodents, etc.—other living things, like weeds, fungi, and bacteria can be just as detrimental to crops, just as troublesome to farmers, and just as worthy of “pest” status. That’s why herbicides, fungicides, and insecticides are often referred to simply as pesticides. Although it’s a broad way of describing them, it’s not incorrect. So if you hear people speaking of pesticides in this more general way, that’s why.

Herbicides are designed specifically to kill weeds—a function that is heavily relied-on in non-organic agriculture. Glyphosate is perhaps the best known and most controversial herbicide today, along with 2,4-D, atrazine, and dicamba. But there are hundreds allowed in conventional agriculture. Crops genetically engineered to be resistant to certain herbicides allow the herbicide to coat both crops and weeds, killing the weeds but leaving the crop alive. Herbicides like glyphosate and 2,4-D are also common ingredients in non-organic lawn care products.

There are a bunch of other chemical “–cides”: Fungicides target funguses, insecticides kill insects, and parasiticides are designed to keep parasites at bay. Some are more common in agricultural contexts than others, but all fall under the general pesticide umbrella and should be regarded with caution in the context of food and farming. 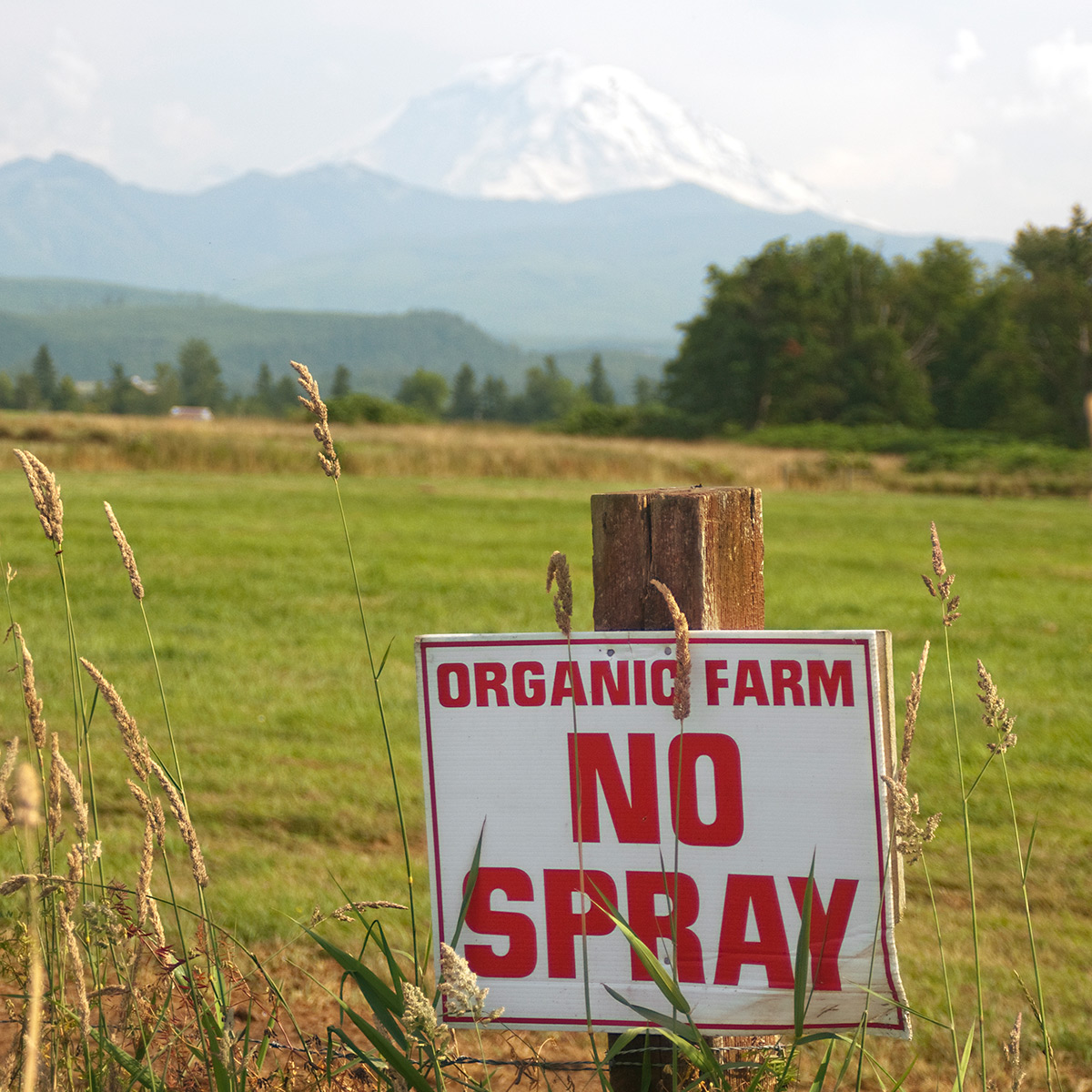 A sign on the edge of the Baker family farm’s pasture in Washington (within view of Mt. Ranier) announces they don’t spray here.

Why We Say No to Toxic Synthetic Pesticides

Lush, full fields of crops are great, but organic farming uses the precautionary principle when it comes to toxic synthetic chemicals. Instead, we use other methods to grow healthy pastures and crops, like companion plantings, cover cropping, biodiversity, and rotational grazing (more on that later).

The organic industry has chosen to use caution and avoid certain pesticides because the poisons that make them toxic to insects and weeds can also make them toxic to humans. Although our larger bodies do a decent job of filtering harmful stuff out, low-level exposure to pesticides in our environment and food still shows up in blood and urine tests. The presence of toxic synthetic pesticide residues in humans has been linked to falling fertility rates, birth defects, premature births, and changes in childhood brain development, among other concerns for adults, children, and fetuses. People living in agricultural regions—especially farmers who handle these chemicals daily—also have higher instances of these issues and certain types of cancers.

Recently, a study conducted by Friends of the Earth demonstrated just how effective an organic diet can be in reducing pesticide residues present in the human body. Young children especially need to be given clean, healthy food in order to support normal development, and this study shows that by eating an organic diet “on average, levels across all pesticides dropped by 60.5 percent.”

Incredibly, according to Friends of the Earth’s data, an organic diet also caused reductions of up to 95 percent in a class of neurotoxic insecticides called organophosphates (OPs), a group of –cides so harmful to children’s developing brains even at low-level exposures that scientists have called for a ban on them altogether. (In fact, similar studies have been conducted by other researchers in the U.S., Sweden and Australia, and these also concluded that eating organic is a successful precautionary approach to reducing pesticide residues in the body.)

Without pesticides, how do organic farmers control weeds and pests?

Since certified organic doesn’t allow toxic synthetic chemicals, organic farmers use techniques such as cover cropping, crop rotations, cultivation, and even hand-weeding when necessary. Our Organic Valley farmers focus on building soil health, because when the soil is healthy and balanced, crops and pastures will grow strong and be able to compete with weeds and fight off diseases. Promoting biodiversity on the farm also makes a difference—predator birds and bugs help keep pests under control. Even the common barn cat pitches in by catching mice.

When they need extra help for severe weed or pest problems, organic farmers are limited to the substances that have been reviewed and approved by the National Organic Program because available evidence shows they pose little to no risk to humans or the environment. Of the 900-plus synthetic and natural pesticides that conventional farmers have access to, only 25 are allowed in organic agriculture, and even then, only under very strict circumstances and with approval from the farm’s certifier. Organic farms can also use naturally derived pesticides (cayenne pepper and soaps are common examples), but these also must be shown to be low-risk to humans and the planet, and can only be used in clearly defined circumstances. (For more on this subject, check out these fascinating facts about what’s allowed in organic farming and what’s not.)

Now that you know the difference between pesticides and herbicides (and other –cides), remember that when you purchase Organic Valley foods for your family, you don’t have to guess or wonder what goes into our delicious dairy, meat and produce because we’re always organic!