Wildfires and the Helpers: How Relief Arrives for Recovering Communities

Justin Baker has been volunteering since he was 17, from founding multiple nonprofits to feeding people around the world, he's dedicated his life to helping. As he hikes the hills next to his house, he notices the sky has grown much hazier than the preceding days. This forest fire-induced haze has become the norm here. Five of the nation's most massive forest fires in recorded history scorched the West in 2020. As Baker nears the top of the hill, he rests and thinks, “What can I do to help?” 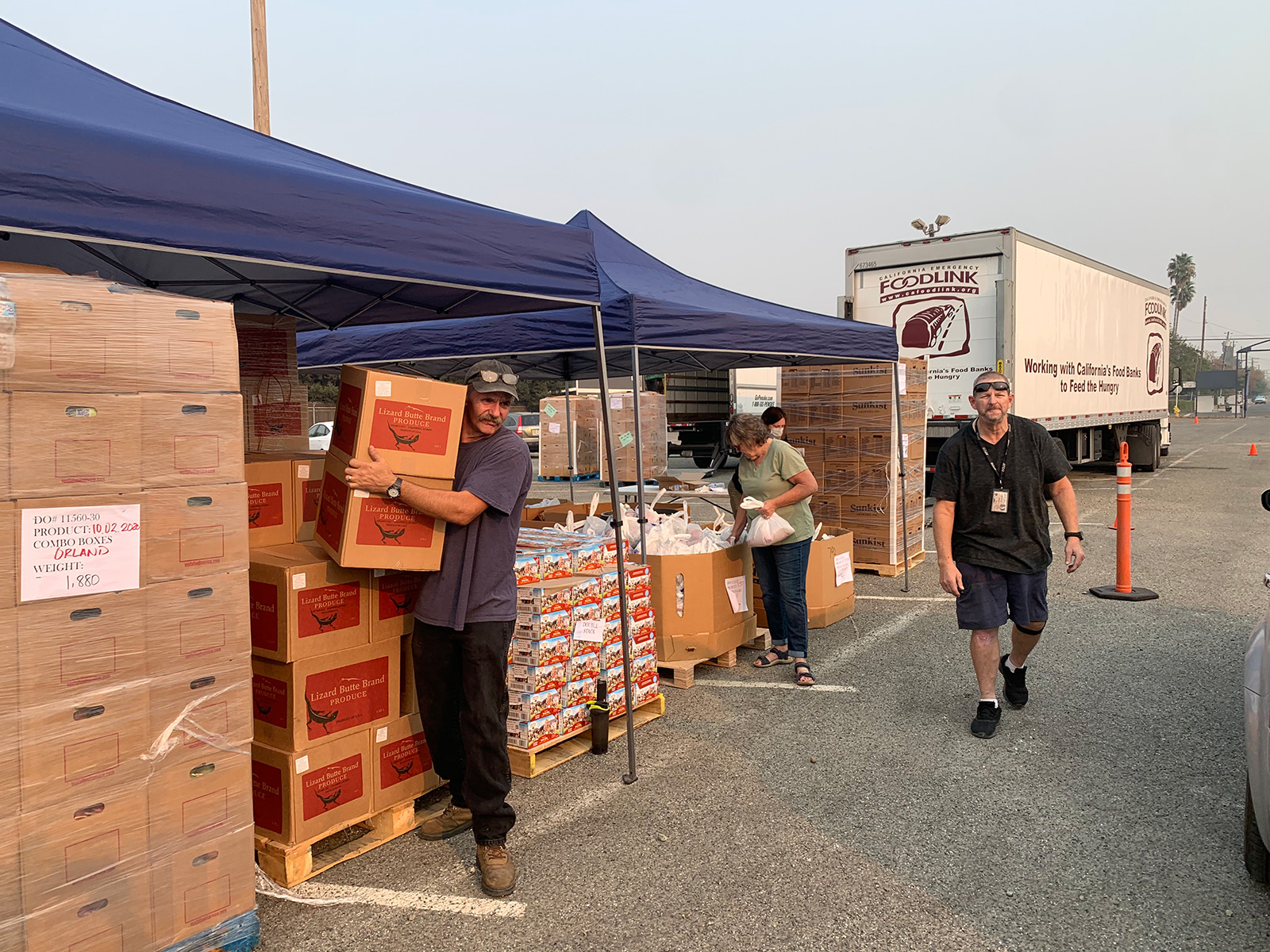 At a distribution point after a wildfire, volunteers distribute organic food and supplies to community members.

The neighborhood burns down

Eight hundred miles north, Shanny Howard lives in Oregon's backwoods in the McKenzie River Valley. It's the type of mountain paradise that is hard to find, even on Google Maps. Although people are spread out, there are roughly 15,000 residents up and down the valley. Today, Howard is driving back to see if his house is standing after the fast-moving Holiday Farm Fire swept over 173,393 acres, including the place his family calls home. As Howard passes the National Guard checkpoint and drives toward his home, he sees an apocalyptic scene of homes turned to ash and cars burned to heaps of steel.

Howard has seen devastation before. He responded to hurricanes Katrina and Sandy and other disasters as a volunteer chef, but when it's your community and your friends' homes it hits hard. As Howard nears his property, he feels blessed to see his house—still standing. Much of the property is a mess, with power lines down and smoke damage, but Howard considers his fortune and turns his attention to helping his neighbors. 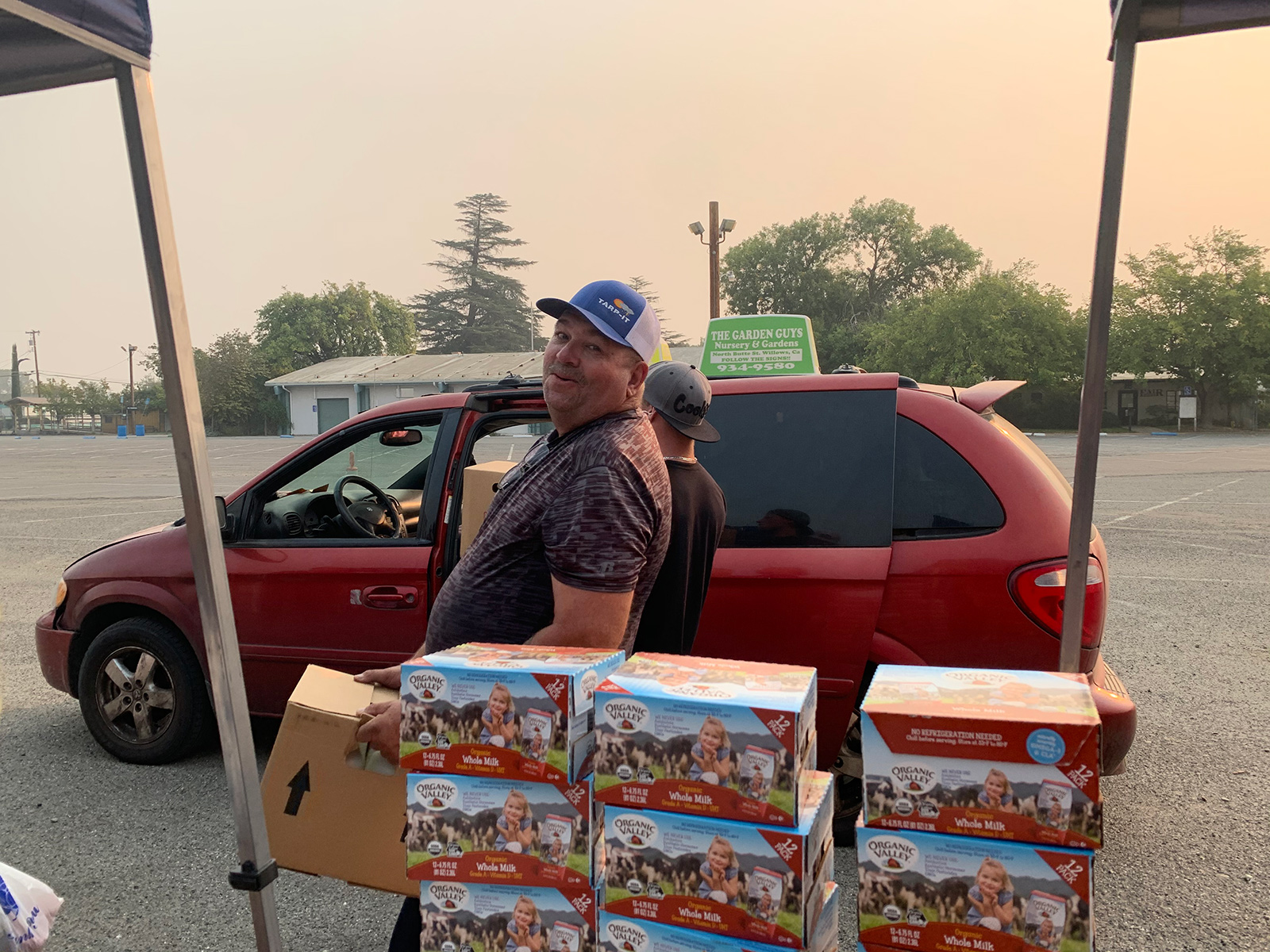 Organic Valley milk and other support being loaded for distribution into the heart of the community.

Chuck Peterson is a hockey-playing Midwesterner with a huge heart. He is also one of Organic Valley's longest-tenured employees; he's put in a whopping 26 years of helping grow the cooperative. For 20 years, he's assisted the co-op in getting food into disaster zones and fighting hunger. When hurricanes and fires strike, he's immediately checking inventories to find food Organic Valley can share with those who need it most.

Giving isn't easy and figuring out how to get goods from Wisconsin all the way across the country into a disaster can be a huge challenge. He is fortunate to have seasoned co-workers Brad Schultheis to review product availability and Thyra Leaman to determine the best opportunity for logistics, to ensure donations are timely in arrival and align with the needs of the region.

"Even if you want to help, getting goods into a disaster can be extremely difficult. It's hard for companies to know where to turn or whether their donations will actually be needed."

Dr. Dave Anderson, who never went to medical school, but owns an automotive repair shop of the same name (Dr. Dave's Auto Repair), is a guy who gets things done. He is the executive director of a unique nonprofit organization called Grassroots Aid Partnership. Its mission is to provide food and aid to vulnerable communities in crisis. When the West Coast fires shifted from annoying to menacing, Dr. Dave was in Washington, D.C., with GAP, running a hot meals program in response to the COVID-19 pandemic and to support Black communities in crisis.

GAP is a liaison organization whose volunteers sometimes personally give out food at locations like D.C. Most often it is the hub connecting companies that want to give with local grassroots relief efforts. Dr. Dave and Justin Baker founded GAP a few years ago. Together they plan how to get goods into the hands of those in need. 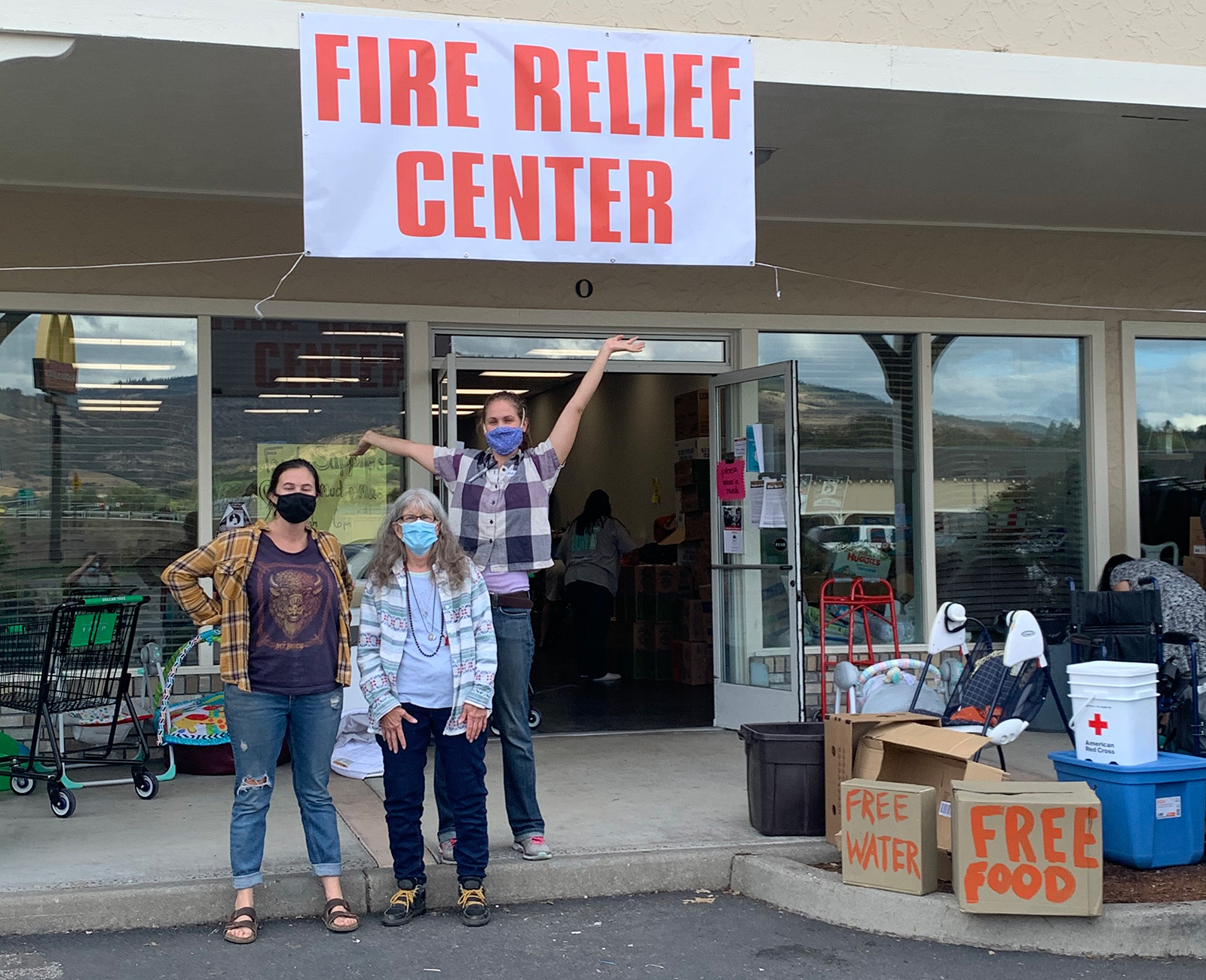 Free food and water provided for anyone in need after widespread wildfires.

Getting goods and moving them west

Step 1: GAP needs goods to give and money to move them around. It sends out the help call to its partners in the natural products industry. Dr. Bronner's (a soap company) is a long-time supporter of disaster relief and comes through with financial support and soap donations.

Peterson, of Organic Valley, preemptively reaches out to GAP to see how the co-op can help. Dr. Dave and Peterson review the foods that Organic Valley could send. Jackpot! Organic Valley has several semi-trucks of shelf-stable single-serve milk, which are perfect for handing out to families living without electricity! Dr. Dave then leverages the donations of the first two companies to get others like Nature's Path excited and donating to the cause.

Step 2: Figure out where to ship and redistribute the goods. Unfortunately, this isn't the first western fire GAP has responded to. Baker ran a huge food distribution program following the 2018 Camp Fire, the most destructive wildfire in California’s history at that time, with the help of North State Food Bank. Unsurprisingly, they offer to help again. So Dr. Dave makes it happen, and the companies send their donated goods.

The “milkman” comes to help

Organic Valley's first semi of milk arrives before all the other goods. Baker rents a truck and meets it at North State Foodbank. They load 14 pallets of milk and dry goods and head up the West Coast. They drop off a pallet here and a half a pallet there, like a modern-day milkman.

"Local redistribution of goods is vital in disaster relief, as 80% of the goods given during disasters end up in a landfill, but GAP's grassroots model focuses on landing usable amounts in each community and making sure they actually need the donations."

Back in the McKenzie River Valley of Oregon, Shanny Howard works with the Mackenzie Community Development Committee (MCDC), a local nonprofit, to establish a hot meals program and a distribution center for food and aid. MCDC has never responded to a disaster, but fortunately, Howard had stayed in contact with fellow relief helpers who are now working with GAP. He helped the two organizations connect, and GAP coached MCDC on how to start its efforts to help locally. Plus, GAP put the area on its list of areas to bring goods to.

The gift of giving

On Baker’s “milkman” voyage, he zig-zags his way over the torched mountain roads into the McKenzie River Valley and brings food and aid to Howard’s community. At the community center, the goods are combined with donations from other relief organizations and then handed out to local families in need. 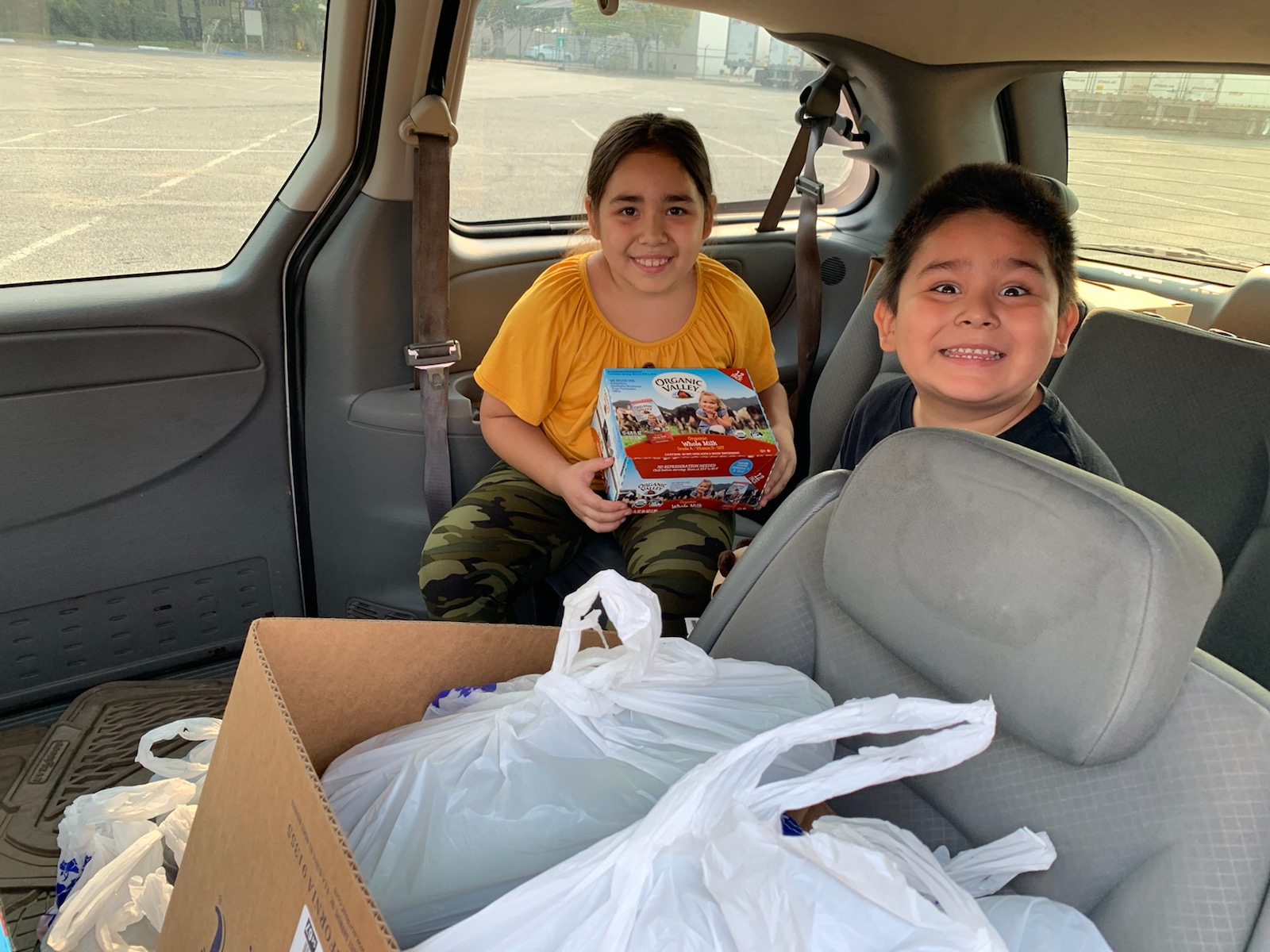 "The goods they are able to hand out at the community center have helped people a lot. We’re way out here, a long way from any shops, and people are in need. It’s a great thing."

How you can help

While Grassroots Aid Partnership, Organic Valley, Dr. Bronner's, Nature's Path, and many others have given over 120,000 pounds of food and aid to help those displaced or impacted by fires up and down the West Coast, there is much work still to be done. Here is how you can help!

If you are on the West Coast, volunteer on labor crews or at food banks like North State Food Bank.

Find a nonprofit like Grassroots Aid Partnership and make a donation.

If your company wants to start helping, reach out to help@grassrootsaidpartnership.org.

Organic Valley, Dr. Bronner's, Nature's Path, Clif Bar, Patagonia Provisions, Nancy's Yogurt, and many others have been active in supporting disaster relief efforts for many years. Know the companies that care, and support them in your everyday purchases. Visit GAP’s website for a list of companies that have shipped goods to those in need.