This is the condensed version of a column Organic Valley farmer Abbie Corse wrote for Civil Eats in October 2019. It may have been more than two years ago (her sons are now ages 8 and 11) but the words Abbie so eloquently shared remain true. There are struggles and there are rewards in farming. Thank you Abbie for sharing your story and being an Organic Valley farmer and caretaker of family, animals, and the Earth.

On a clear September day, I drive the tractor up past the mulch field dotted with yellow goldenrod and poplar saplings, past the old grey fence. The leaves are just turning; their points yellowing, tie dyes of vermilion, chartreuse, and mustard. As long as the hay baler doesn’t break again, today is the last day I will spend harvesting this year. We have just two-and-a-half months to harvest hay, in hopes of storing up enough forage to ensure that the grass-fed cows on our farm have enough to eat to produce milk for the rest of the year.

I settle into the seat, absentmindedly polishing up the apple I meant to eat a few hours ago and am just now remembering. It tastes like the season that is rapidly descending. I feel like I can breathe again, the chaos of the morning fading into the background. The cows are in the field, and my boys are fed and on the bus.

I’m a sixth-generation farmer, on track to take over my family’s 150-year-old organic dairy farm  in southern Vermont. My parents are still farming with me, and the majority of the management and labor still falls to them, despite the fact that they’re in their 60s. I log anywhere between 20 to 50 hours a week on the farm, and the rest of the time, I spend raising my 9- and 5-year-old sons. 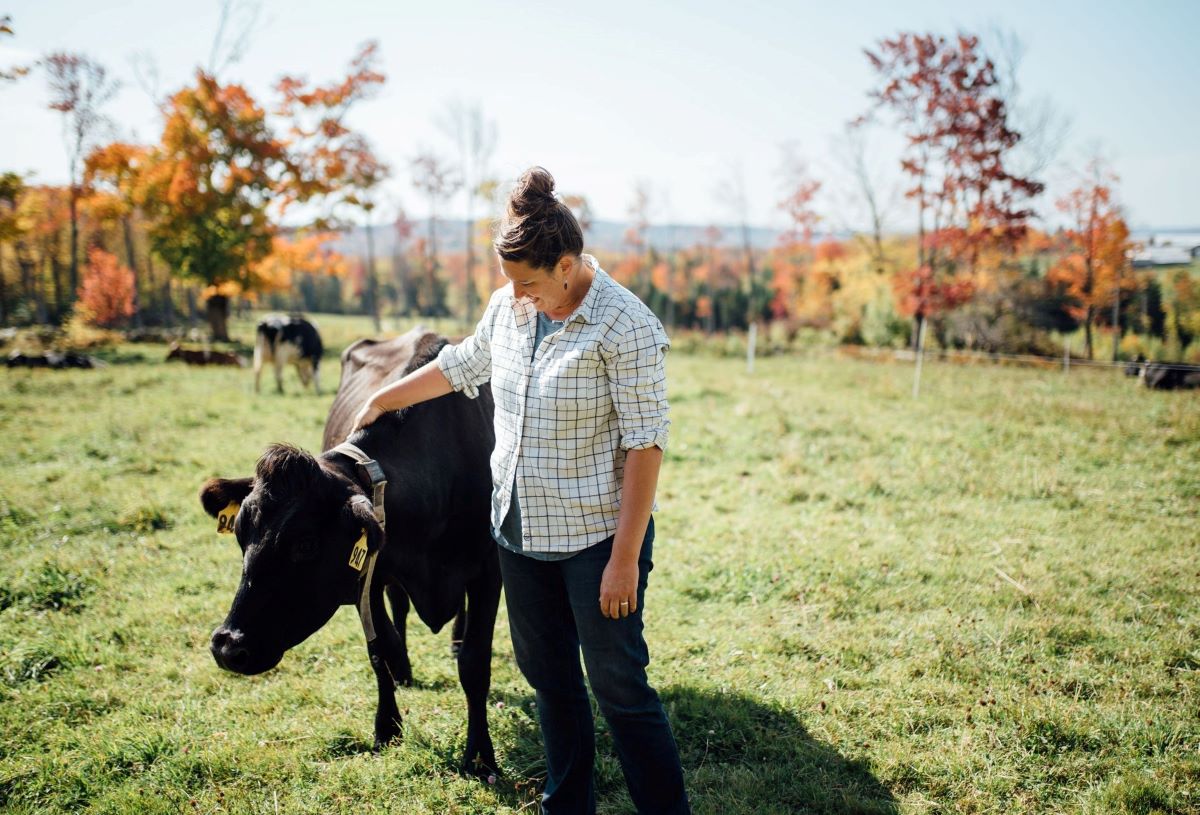 Abbie Corse takes time to pet a cow on her organic farm in Vermont.

As a mother and a farmer, I am raising the next generation while producing food. Both, I would argue, are foundational and valuable contributions to society. And yet, these roles remain both invisible and seemingly undervalued in contemporary America. Based on my experience, and that of others I know juggling both roles, there are few of us having an easy time paying our bills.

It’s not easy to find time to establish connections with other farming mothers; the long hours, geographical isolation, and the lack of rural broadband often keep us apart. But when we are together, I am inevitably struck by how our conversations revolve around the deficiency we share in our capacity to show up fully for any of our expectations. For most of us it feels like we are supposed to show up for the farm as though we don’t have kids and show up for our kids as though we don’t farm.

Although the number of female farmers has risen (with female producers representing as much as 36% of farmers), anecdotally there is no question that we are the ones balancing farm and family duties the most.

Dairy Farms on the Downfall

The reality of the dairy economy has seen the number of American dairy farms dropping by more than 93% since the 1970s. That trend is only going to continue, based on the policies, practices, and consolidation trends that pervade our dairy landscape.

While organic dairy farmers can eke out a price that covers the cost of production, the situation for conventional dairy farmers is far more grim. Many farmers aren’t breaking even.

As many of my neighbors and farmer colleagues have made the gut-wrenching decision to auction their herds or sell their farms, I’m acutely aware of our privilege. The mortgage on our 150-year-old farm has long been paid off. The land and place for which we have so much love and respect ultimately is unceded homeland to the Sokoki band of the Abenaki. We have the option to choose when and how to take on debt, and we ship our milk to a cooperative that we own with other farmers that rewards us for focusing on making the most high-quality milk we can as opposed to the quantity.

The scent of the tractor is heavenly—it collects the sunshine and hay chafe and tumbles it up into this smell that immediately evokes haylofts, laughter, family, and summer. This afternoon when I get to the bus stop and scoop my littlest up, he will inevitably say, “Mama, you smell like the hayfield.”

And I will know exactly what he means because I remember hugging my dad and thinking the same. I remember the delight of trekking around after him as he moved fences or shuffled cattle. It is only now that I am cognizant of the dual labor that both my parents took on. To entertain the curiosity of a young child without crushing it while carrying out the myriad farm chores is no small task. 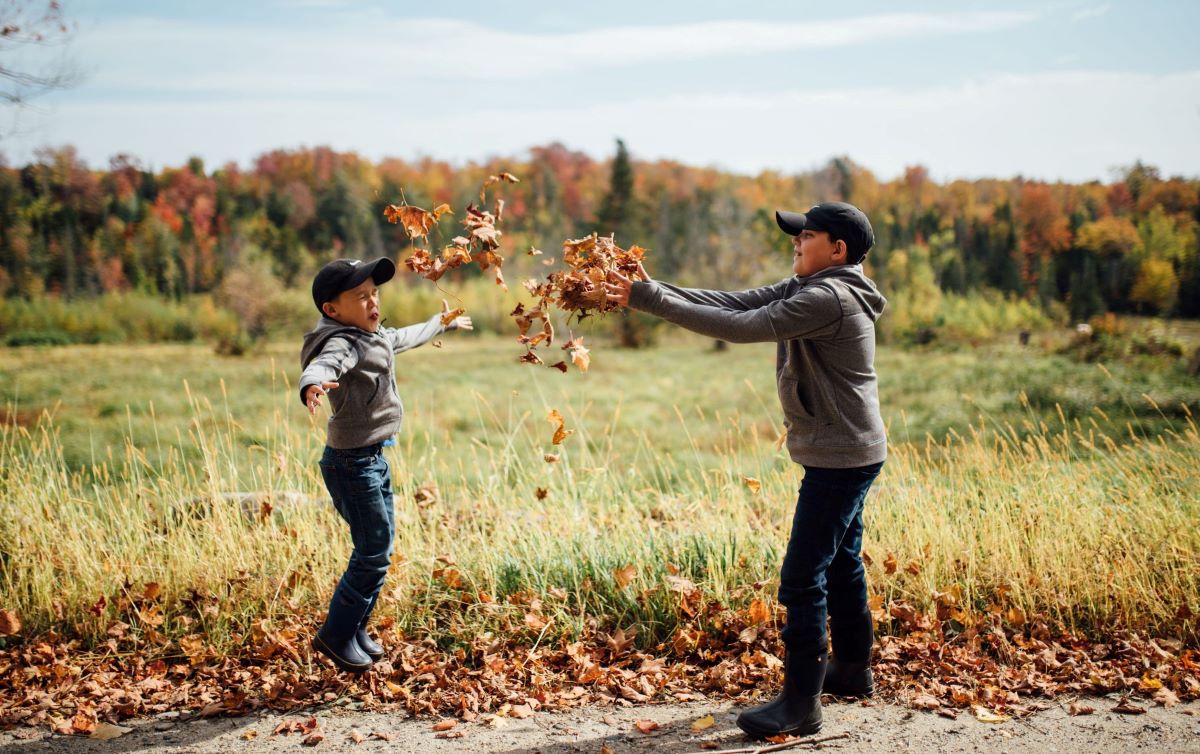 For me, the result of this mother-farmer collision is massive guilt, anxiety, panic, and middle-of-the-night worries; a near-constant sense that if just one thing shifts, the entire house of cards—on the farm and at home—will flutter down. Despite my privilege and love for my work, I dwell in uncertainty. I keep thinking that it should be possible (in the wealthiest country in the world) to work hard, raise children, and make a living at the same time.

A rural life isn’t for everyone, but we need a policy overhaul that could allow those of us who are committed to providing people with high-quality food and stewarding our environment at the same time have access to a life of dignity.

We need policies that honor the work that Black, Brown, and Indigenous people have done for centuries to care for the land, and return land to their care. We need, not only childcare subsidies, but safe, consistent places for our children to be, no matter how rurally we live. We need to abandon the ridiculous notion that it is only with massive factory farming that we will feed the world. And, most of all, we need to bring our farmers and our farmworkers back into the conversation. The 50,000-foot view is beneficial, but if you are not the person on the ground, up every day at the crack of dawn, putting in the back-breaking work, you simply do not know what it is you’re asking of farmers. 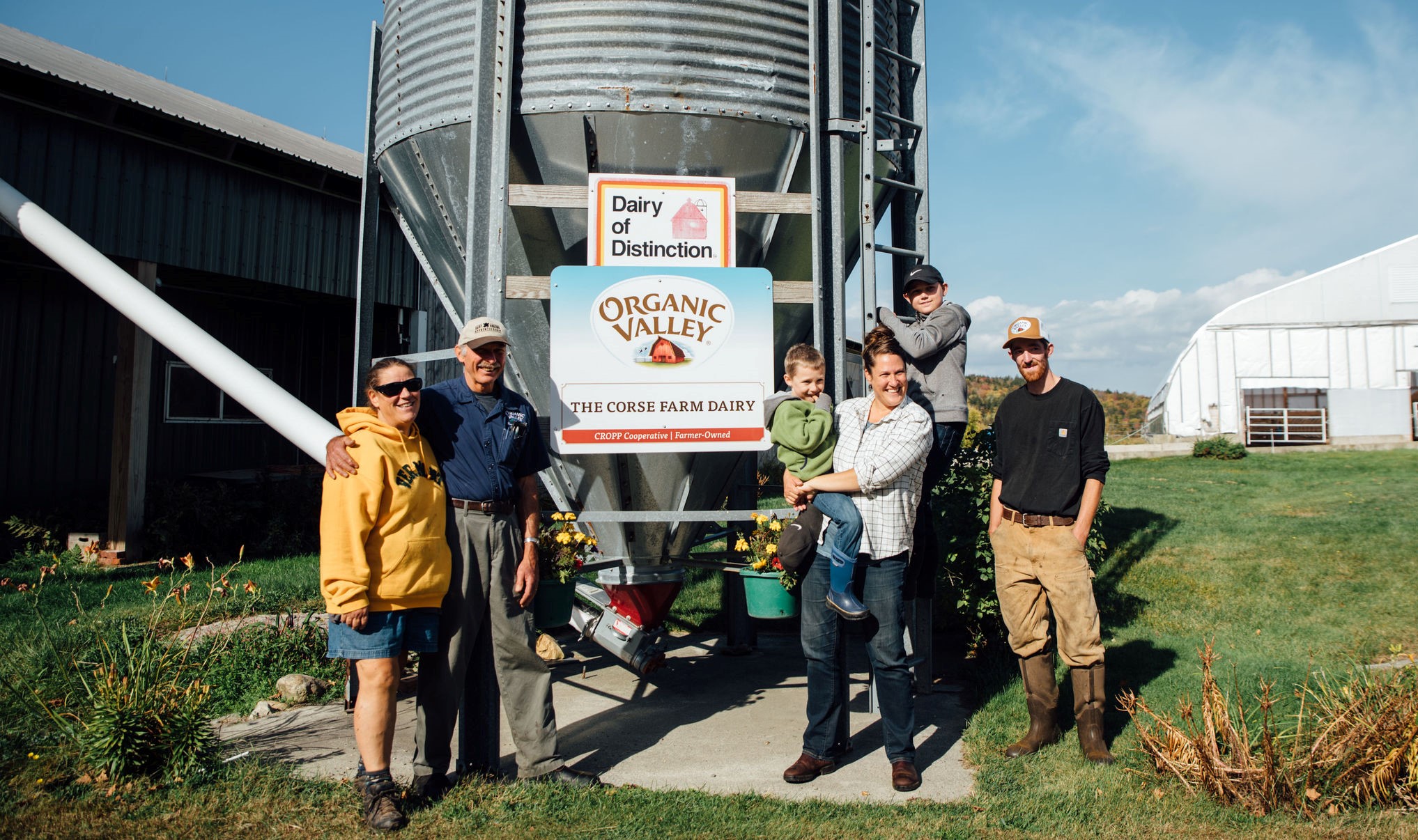 The Corse family on their organic farm in Vermont.

On another fall day, I look up from my work in the farmhouse and glimpse my father’s floppy hat bouncing along the ridgeline. My 9-year-old, Eli, is bounding ahead of him, and my mom follows with Niko, my 5-year-old, whose still-tiny hand is tucked in her own. To the west, the mountains stand in stark contrast to the cerulean sky. I’m sitting in the room where my grandfather snuck maple candy to me while I sat on his lap grinding beef for the winter. It is now the room where my parents will grow old. This place has seen many iterations of family and farm. It is my sincere and desperate hope that it will survive to see many generations more.

"From my perspective, the value of the farmer is their ability to juggle so many realities and uncontrollable variables at one time, their ability to metabolize scientific data and research and put it into practice."