October is Non-GMO Month, so it’s the perfect time to remind everyone that organic always means non-GMO!

When you’re walking through the grocery store and see the little green-and-white USDA Organic seal, you can be confident that the product contains no GMOs. Simple as that! 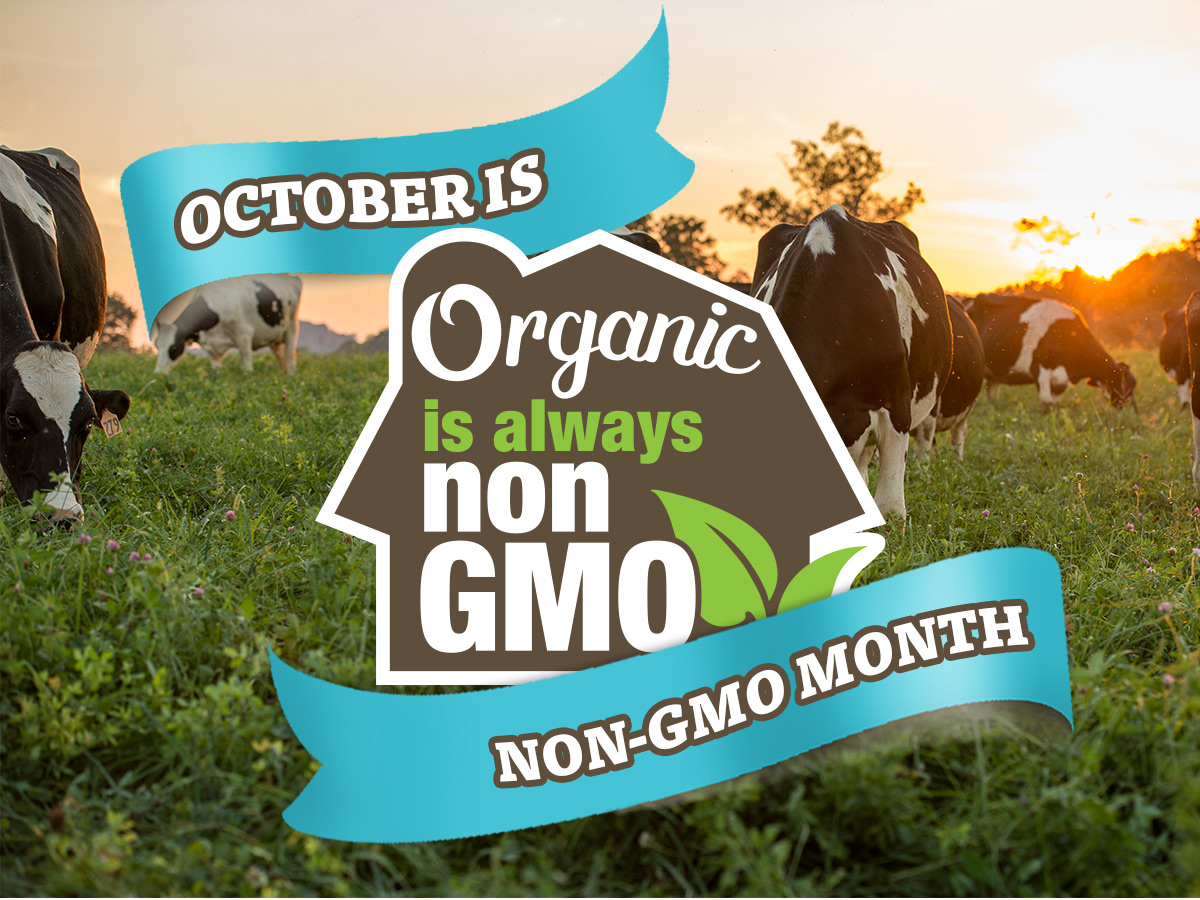 But what are GMOs?

Genetically modified organisms (GMOs) are living things that are developed in a lab by combining DNA of two unrelated species, such as a plant and a bacterium, to create an organism that exhibits a desirable trait, such as pesticide resistance.

This technique is called genetic engineering (GE), and you may see the two acronyms used interchangeably: GMO soy, GE soy. Most of the corn and soy grown in the United States today is GMO and used for animal feed or corn ethanol.

What’s the difference between genetic engineering and traditional breeding?

While both methods involve human intervention, the key difference between genetic engineering and traditional breeding is that a GMO plant or animal could not develop on its own in nature. A plant and a bacterium would not breed naturally. Neither would a fish and a sea anemone. Their DNA has to be combined in a lab.

Traditional breeding methods require selecting a plant or animal that exhibits (or is as close as you can currently get to) the trait you’re looking for. This requires selectively breeding for many generations. With seeds, it can take decades to arrive at a plant that reliably exhibits the traits you’re looking for.

These days, you can find non-GMO plants that were bred for flavor, leaf size (to shade out weeds), drought resistance, and much more. Various breeds of cow have been selectively bred for higher milk production, higher butterfat in their milk, cold-hardiness, good health, and other qualities. Because these plants and animals did not use genetic engineering, they are not GMO. 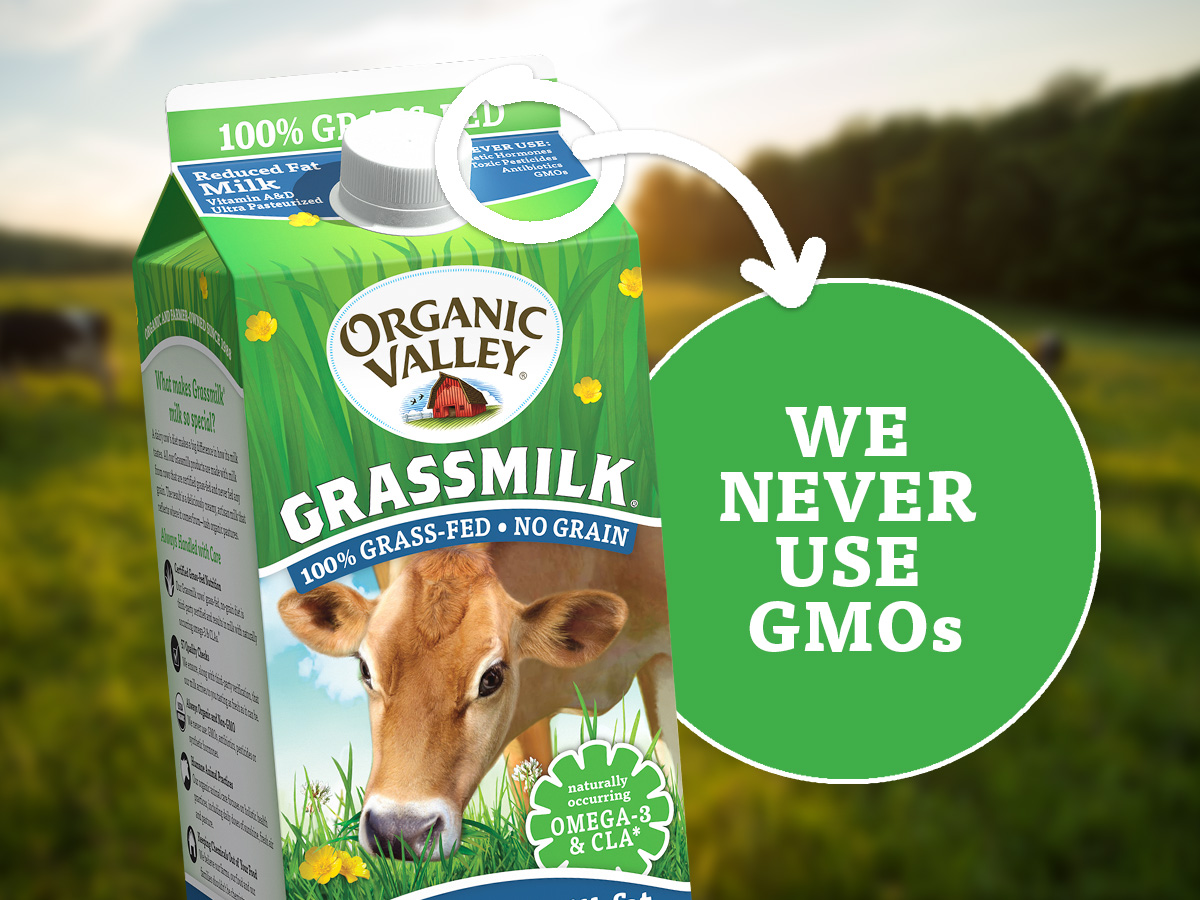 A core value of the organic movement is working in harmony with nature. This might be reason enough to disallow them, but available research has revealed additional concerns.

Most published research tends to support the message that GMOs are safe for humans, animals, and the environment. However, many of these studies were small, or were conducted or funded by GMO seed companies (source), creating serious conflicts of interest. Also tellingly, many countries around the world don’t allow GMOs in any foods, whether conventional or organic. We believe this cautionary evidence should not be ignored.

Most influentially, the use of GMOs like herbicide-resistant corn and soy encourages the use of synthetic pesticides and herbicides, which have well-documented evidence of being harmful to humans and the environment.

Because of the lingering questions, the organic movement has chosen to follow the Precautionary Principle, which says that if the evidence of safety is not conclusive, then it’s best to use caution and avoid it.

Could organic foods be contaminated by GMOs on the farm?

It’s possible—farmers can’t control the weather, as much as they’d like to—but our organic farmers do everything in their power to prevent GMO contamination.

First of all, National Organic Program requirements say organic farmers can’t use GMOs—period—and that organic farms are required to have buffer zones between their farms and any non-organic neighbors.

Going beyond the requirements, crop farmers may stagger planting times with their neighbors so that their crops don’t pollinate at the same time. Exciting new research is also using traditional breeding methods to develop corn varieties that won’t even accept the pollen of GMO corn (try saying gametophytic incompatibility three times fast).This science will be a game-changer for organic corn growers.

All this is a long way of saying: Organic Always Means Non-GMO.

We at Organic Valley fully support the U.S. National Organic Program’s prohibition of GMOs in organic farming and foods. In partnership with our consumers and like-minded organic companies, we will continue to uphold this value and advocate for GMO labeling on non-organic foods, because all consumers have a right to know what’s in their food.