More Greenhouse Gas From Organic? That’s Not Even Half the Story

There’s been a flurry of recent headlines saying that a switch to organic agriculture would raise greenhouse gas (GHG) emissions by some 20% to 70% percent (depending on which story you read). They’re convenient headlines—simple argument, big splash. But we all know it’s never that simple. There are other systemic issues at play in the food system, like inequitable distribution, food waste, and poor diets.

As a certified organic farmer I was frustrated by the way the study was reported—the continued focus on lower yield, as if that’s all that matters. Yet as a researcher as well, I’m driven to dig a little deeper. I wanted to check my gut reaction and see what other people thought.

I reached out to one of Organic Valley’s farmer-owners, Jon Bansen of Oregon, and before I even prompted him, his immediate comment was, “Their study supposes that everybody is still going to consume exactly how they consume now.” Dr. Erin Silva at the University of Wisconsin–Madison, echoed the comment, noting, “They’re making assumptions that we’re going to change one aspect of the food system without changing other aspects.”

These types of oversimplifications are problematic and misleading. Based on this single study, some articles said the study claimed a 21% increase in GHG, and another said 70%. The headlines make it sound like the switch from conventional to organic is to blame, even though the study itself doesn’t necessarily support that. In fact, the study found that some crops did better in organic systems than others, and organic produced less GHG per acre. 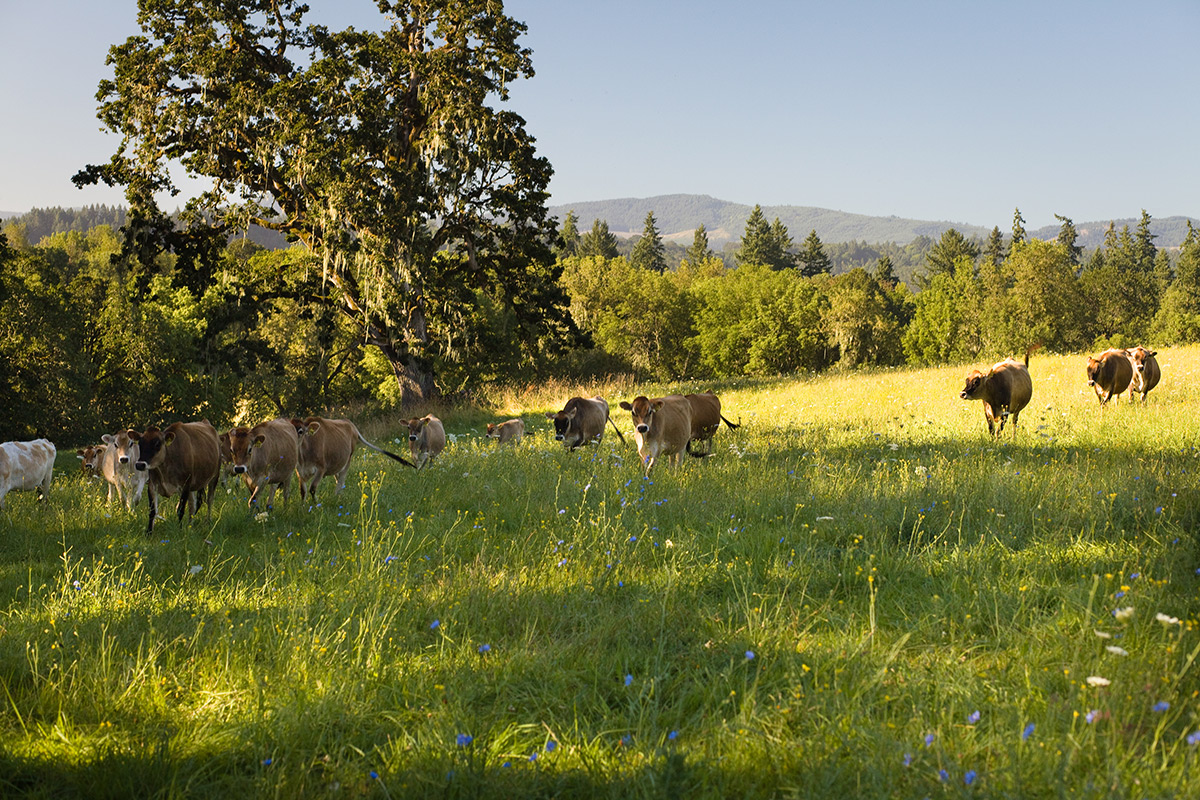 It’s also important to note that the model used in the study only reflected the UK, a region with very different climate and farming challenges than the US (where smaller differences between organic and conventional have been found). Unfortunately, given the overly broad headlines in the popular press, many US readers would naturally make assumptions that the conclusions would apply to their country too. Although likely not the authors’ intent, it is yet another way articles in the popular press misled readers.

Let’s dig into the bigger picture.

Building the Model but Missing the Picture

The authors of the study focus on the fact that UK organic systems currently yield 60% of what is seen in conventional systems, thus more food would have to be imported from overseas. Here’s their logic:

They break this down into three possible scenarios, where the additional overseas production comes from: 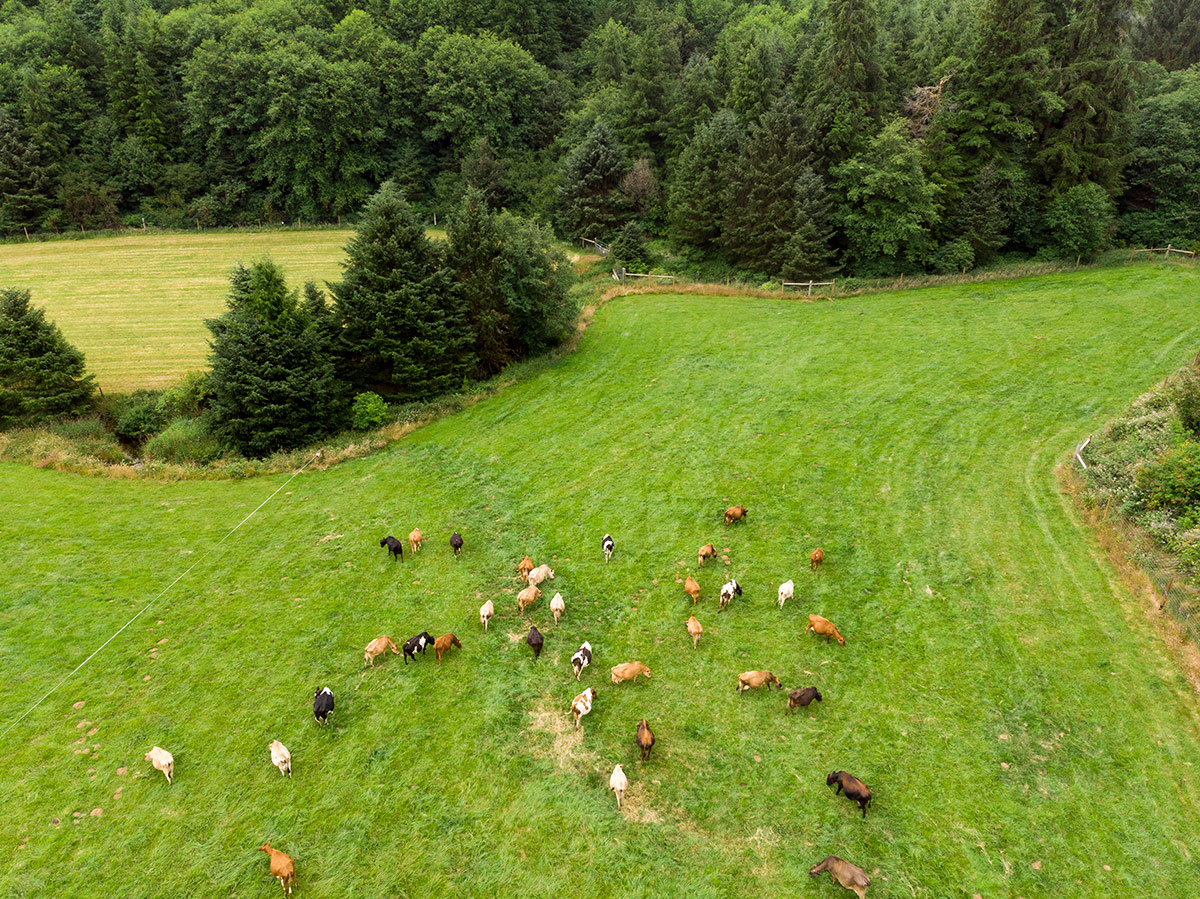 It’s actually this land use change, from virgin grassland to cultivated fields that is to blame for the increase in GHG emissions quoted in the headlines. When you dig a little deeper, it’s a strange assumption to make. As Dr. Silva astutely points out, organic has a regulatory structure that actually pushes farmers toward goals that maintain biodiversity and environmental integrity. Dr. Jessica Shade, director of science programs at the Organic Center, puts it more bluntly: “Organic farmers don’t have a bunch of native lands sitting around…and aren’t transitioning it if they did.”

The study also found that when currently cultivated and conventionally managed land overseas is transitioned to organic, there is actually a carbon sequestration benefit. Scenario C, with 75% arable land, is almost neutral in its net GHG change. It is interesting that the authors didn’t care to include a scenario where 100% of that additional land came from current conventional land transitioned to organic; which would have shown a net positive effect.  In fact, an alternative headline based on another conclusion from the study could have read: Switching to organic production in the UK would produce 8% less GHG per acre.

What I really find interesting about the assumption of increased leaching is that the essential premise of lower yields is partly based on longer rotations in organic systems—more time when human food crops are rotated out in favor of nitrogen-fixing forage crops like alfalfa. During those parts of the rotation, there would realistically be little to no fertilizer application and, therefore, very little potential for nitrogen loss. In fact, when considering the entire rotation, a recent study in Iowa found that mature organic soils leach just half the nitrogen that conventional systems do. 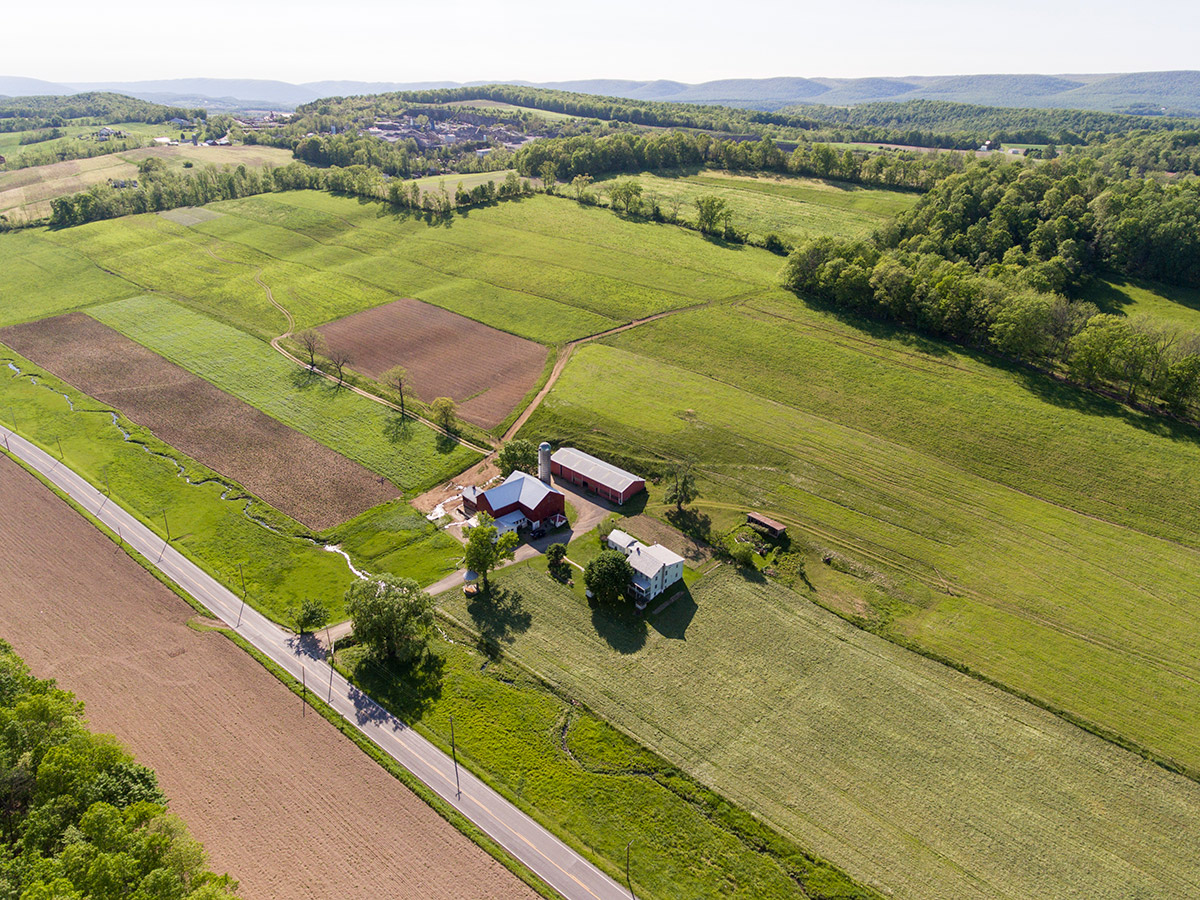 Despite those longer rotations, the study at issue indicates yields of 6 crops are actually better under organic management, while 5 crops do better in conventional systems. That conclusion went largely unreported, as did the fact that the bulk of the reported 40% “metabolisable energy” gap is mostly caused by barley and wheat. As Dr. Silva reminded me, this isn’t surprising given the short growing season and amount of moisture in the UK: conditions there favor the development of crop diseases that make it very difficult to produce food-grade wheat and barley without serious fungicides.

Dr. Silva points out that we “can’t necessarily dismiss organic because we haven’t done the research or breeding to close that yield gap.” Indeed, there could be huge improvements in dealing with disease, weed control, and other challenges if organic agriculture received a fraction of the research funding dedicated to conventional. As Dr. Shade said, the study “couldn’t have made a better argument for why we need to do that.”

In fact, the yield gap between organic and conventional shrinks as time goes on—likely due to continuing improvements in practices, crop genetics, technology, and research funding. Already, Dr. Silva notes, “There are other crops like corn and soybeans and alfalfa where, with good management, the yield gap is negligible in some regions.”

From my perspective, the results of this recent study are actually encouraging for organic agriculture. Their yield results indicate that if we couple gradual shifts in production practices with gradual shifts in diet and food distribution, we can create a significantly more sustainable food system.

The Missing Puzzle Pieces: Changing Our Diet, Rethinking Our Approach

In the case of this study, if wheat and barley don’t do well in organic systems while rye and oats do better, then producers, processors, and consumers are going to have to work together to find a way to eat more rye and oats and less wheat and barley, until research on those crops helps us overcome the yield gap. The model the study used allowed for some increases in production for crops that do better in organic systems, but placed fairly arbitrary limits on those increases based on current consumer demand.

But there’s another more critical point about diets that was ignored by the study. Estimates indicate that approximately 40% of global food is wasted, either on-farm or once it has reached the consumer, and that overeating is just as much of a problem. So maybe, just maybe, the constant push to yield more, produce more, isn’t actually the right approach. If those estimates are anywhere near correct, the 40% yield gap identified in this recent study could be offset by reducing food waste, better consumption habits, and a more equitable distribution system.

As Bansen comically put it, “The study is based on…eating just the same, like they’re going to have an organic fast food burger, but that’s just not the case. I hate to be the bearer of bad news, but people are just going to have to eat their broccoli, they just are.” His passion for organic food and farming was readily evident, but so was his frustration with the way so many of these recent articles portrayed the research out of context. Yet by the end of our conversation, there was a bit of hope mixed in with that frustration.

The study, he said, was “based on a broken model, and I can’t abide by studies that are just figuring everything is going to stay broken. Organic is about fixing, not patching holes. You can’t go at organic [farming] like, ‘OK, I’m conventional, and now I’m just going to replace these inputs with these.’ You need to focus on building soil carbon, and increasing biodiversity in the soils… That’s where all the benefits of organic come out heads and tails above the others, and it makes it [organic food] more nutritious too.” 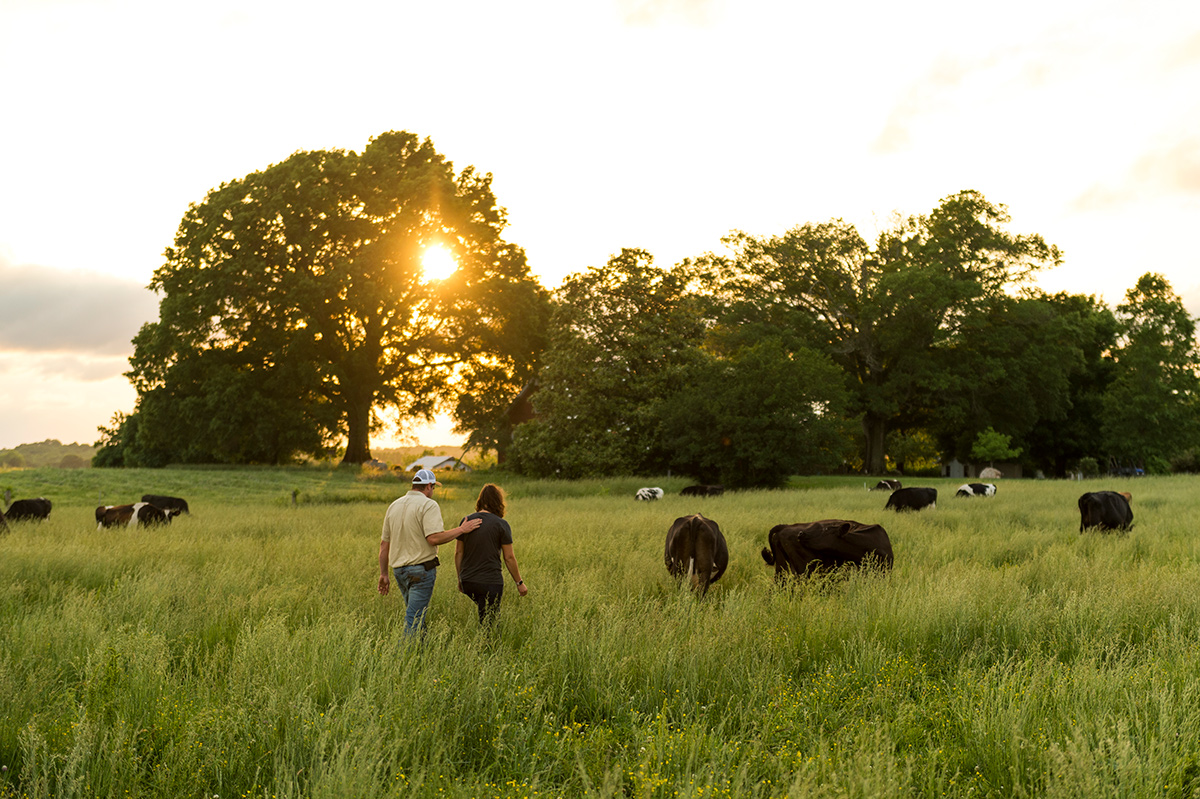 In my own research while writing this response, I had begun to fall into the same trap as the popular press: taking each of the study’s conclusions out of context, building a tit-for-tat rebuttal born out of my own frustrations. Bansen’s comments made me realize that even an organic farmer and researcher like myself needs an occasional reminder to see the whole picture and think a little bit bigger.

These studies are valuable for reinforcing that organic agriculture deserves more research funding, and that there are always improvements to be made. As Dr. Silva said, “It’s impressive that organic is where it’s at given the lack of research.”

So as I put my research hat on for the winter, setting aside my role as a farmer, I don’t mind that there is always more work to be done, because I know in organic, it’s the good work of building soil, building community, and thinking big.

Although, I have to say, I’m lucky as a researcher to meet and talk with folks like Jon Bansen, because something tells me this study’s authors haven’t met enough farmers like him.