rBGH Decoded: What you Need to Know about Hormones in Dairy

With what seems like every aspect of modern life in a state of continued acceleration, it’s no surprise that scientists developed an additive to increase milk production in cows. Of course, getting more milk faster isn’t a bad thing in and of itself, but giving cows growth hormones to increase production has many questions associated with its safety—both for the cows and the people who drink their milk.

USDA Certified Organic agriculture regulations prohibit the use of synthetic bovine growth hormone, often referred to as rBGH or rBST, as well as other livestock hormones. And while you never have to worry about any of our milk being produced with extra hormones, there’s enough confusion around added hormones that we’re doing a little deep-dive here to lay out the facts.

About 60 years ago, scientists found that milk production increased when cows were injected with growth hormone extracted from cattle pituitary glands. When, in the 1980s, the development of recombinant DNA processes made it possible to produce large quantities of bovine growth hormone in a lab, the use of rBGH in agriculture was inevitable. In 1993 the FDA approved Monsanto Company’s application for a drug containing rBGH, and synthetic growth hormones have been a part of conventional dairy production ever since.

rBGH isn’t the only mixed-capitalization initialism in the dairy case. You may also see “rBST-free” claims on products. rBST stands for recombinant bovine somatotropin. Somatotropin is the specific name of the growth hormone secreted by the pituitary gland—it’s the same thing as rBGH, just labeled with a few different letters.

How do These Hormones Work?

Whether by the name rBGH or rBST, injecting cows with growth hormone stimulates milk production by increasing levels of another naturally occurring hormone called insulin-like growth factor or IGF-1.

However, rBGH isn’t the only hormone used in animal agriculture. Hormones like gonadotropin releasing hormone (GnRH), progesterone, and prostaglandins are used to time dairy cows’ breeding cycles and make them more likely to conceive. In beef production, steroid hormones like estrogen and testosterone promote growth and leaner meat. In fact, many sources say hormones are more commonly used in meat production than dairy, although actual usage data is unavailable. (Of course, organic standards prohibit the addition of any synthetic hormones—the amount of milk and meat a healthy and happy cow can produce naturally is good enough for us!)

Thanks to consumer pressure, use of rBGH has been declining in recent years. However, it is incredibly important to remember that rBGH is not the only synthetic livestock hormone used in conventional agriculture. This means, just because a product is labeled “rBGH/rBST-free” doesn’t necessarily mean “synthetic/added hormone free.” Other synthetic hormones could have been used—it’s just that rBGH is the one most consumers know about and have spoken up against. 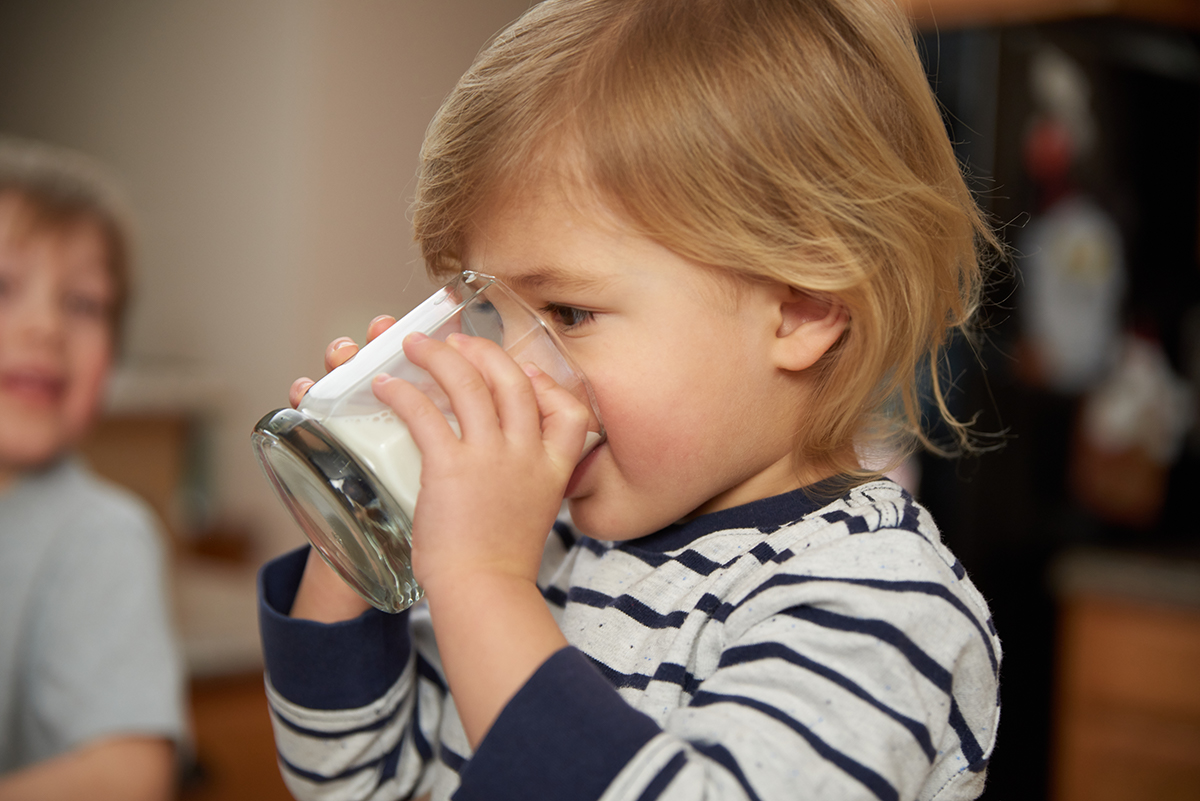 Other public interest groups and governments have reached different conclusions. Vermont Public Interest Research Group and Rural Vermont have questioned the safety of rBGH for human consumption based on analysis done by Health Canada (the Canadian equivalent of the FDA). Health Canada believes that there could be possible adverse health effects of rBGH for humans because long-term toxicology studies were not required by the FDA, and Health Canada’s analysis of a 90-day rat study revealed an increased risk of thyroid cysts and prostate issues. The FDA, for its part, says that the thyroid and prostate changes were the same in the test and control groups, and that Canadian reviewers simply misinterpreted the study results.

Regardless of whose scientific analysis is ultimately correct, Canada and Europe have taken a markedly more cautious approach to bovine growth hormone than the United States—they’ve banned it entirely, and they argue the FDA is not looking closely enough at the facts.

“Canadian and European regulators found that the FDA completely failed to consider a study that showed how the increased IGF-1 in rBGH milk could survive digestion and make its way into the intestines and blood stream of consumers,” reports the Center for Food Safety. IGF-1 occurs naturally in both cattle and humans, but there have been possible connections drawn between higher levels of IGF-1 in humans and increased risk of some cancers, including studies linking IGF-1 to breast cancer.

Additionally, after rBGH was approved in 1993, the FDA ignored appeals from consumers, food safety organizations, and scientists to reverse its approval of the hormone, or to even require labeling of foods containing rBGH. Today, “rBGH-free” labeling is allowed, but the package must also include a disclaimer stating the FDA finds no difference between milk that uses or doesn’t use it. 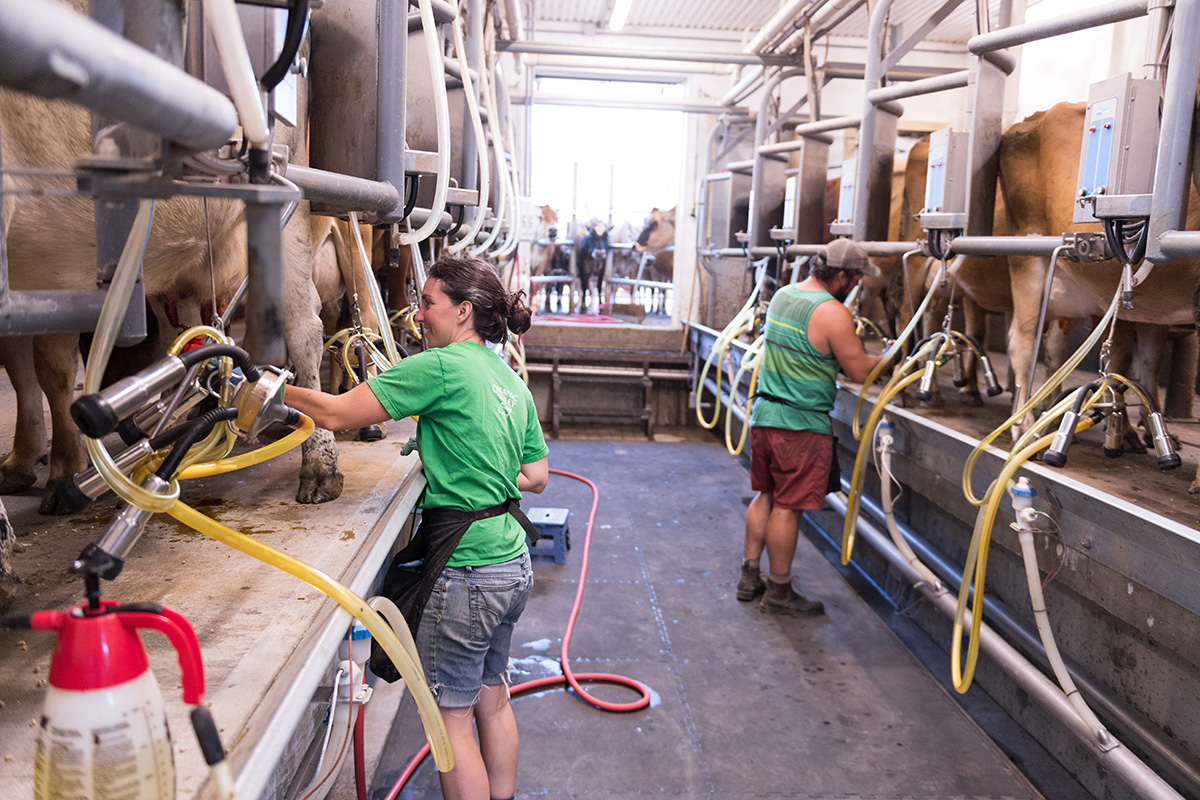 The cows on Melanie and Tyler Webb’s organic farm do not receive added hormones. The Webbs are happy with the amount of milk their Jersey cows produce, and they say the cows are healthier because they’re not pushed to produce more.

While the potential ramifications of rBGH use for humans are certainly worth examining, so are the risks for the cows being given them. In cows treated with rBGH, health problems often develop.

According to a meta-analysis published in 2003, injecting cows with rBGH increases the risk of three important health conditions:

An increased risk of mastitis is particularly concerning—for cows and the rest of the world—because these infections are treated with antibiotics, and the high use of antibiotics in livestock can create antibiotic-resistant bacteria. In organic dairy, however, the use of both artificial hormones and antibiotics* is prohibited by law.

Given that growth hormones are produced naturally by cows, they can be expected to register at some level in all milk samples. However, data shows that organic milk contains less bovine growth hormone than conventional milk.

A study conducted by Emory University in collaboration with The Organic Center found that bovine growth hormone levels were 20 times higher in conventional milk than in organic milk. The researchers said this “suggests that the difference reflects the use of synthetic growth hormones” in conventional dairy. Furthermore, the low-level hormones detected in organic milk coincide with a cow’s natural biological cycle when lactating, calling the elevated levels of hormones in conventional milk further into question.

It Doesn’t Hurt to be Cautious

With research on the safety of rBGH for humans and cows still inconclusive, and research on other livestock hormones scarce, we’re proud that USDA Organic standards err on the side of caution for human and animal health by banning their use in certified organic agriculture.

Not only does eliminating rBGH and other livestock hormones from dairy and meat reduce potential risk for humans, it also promotes humane animal treatment by reducing the proven health risks for the cows who provide us with food. Additionally, it can be argued that cows produce plenty of milk and meat without the need for added hormones.

Our farmers never use rBGH or any other synthetic hormone so that you don’t have to worry or wonder when you pick up a carton of Organic Valley milk. To us, keeping milk simple and natural is just plain common sense.

*Although antibiotics are prohibited in organic production, their use is required to prevent undue suffering if approved methods are not effective. The treated animal then loses its organic certification and must be removed from the organic herd.