Since 1999, the Organic Valley Chaseburg Creamery’s cultured, European-style, salted, and Pasture butters have been awarded 64 times in prestigious national competitions, including 29 Gold and First Place prizes in the nation’s top annual dairy contests. In fact, we believe it’s safe to say that over its 20-year history, the buttermakers at Chaseburg Creamery have won more awards in national competitions than any other organic creamery in the nation.

Not bad for a century-old community cheese plant that had been shuttered for more than two years and left for dead in Wisconsin’s landscape of dying dairy towns.

But in 1998, Organic Valley saw something special in the cheese plant and in the folks who live in and around Chaseburg, where generations of families milked cows and crafted cheese since the 1920s. It was a chance at community rebirth—a rare thing in Wisconsin’s rural landscape. 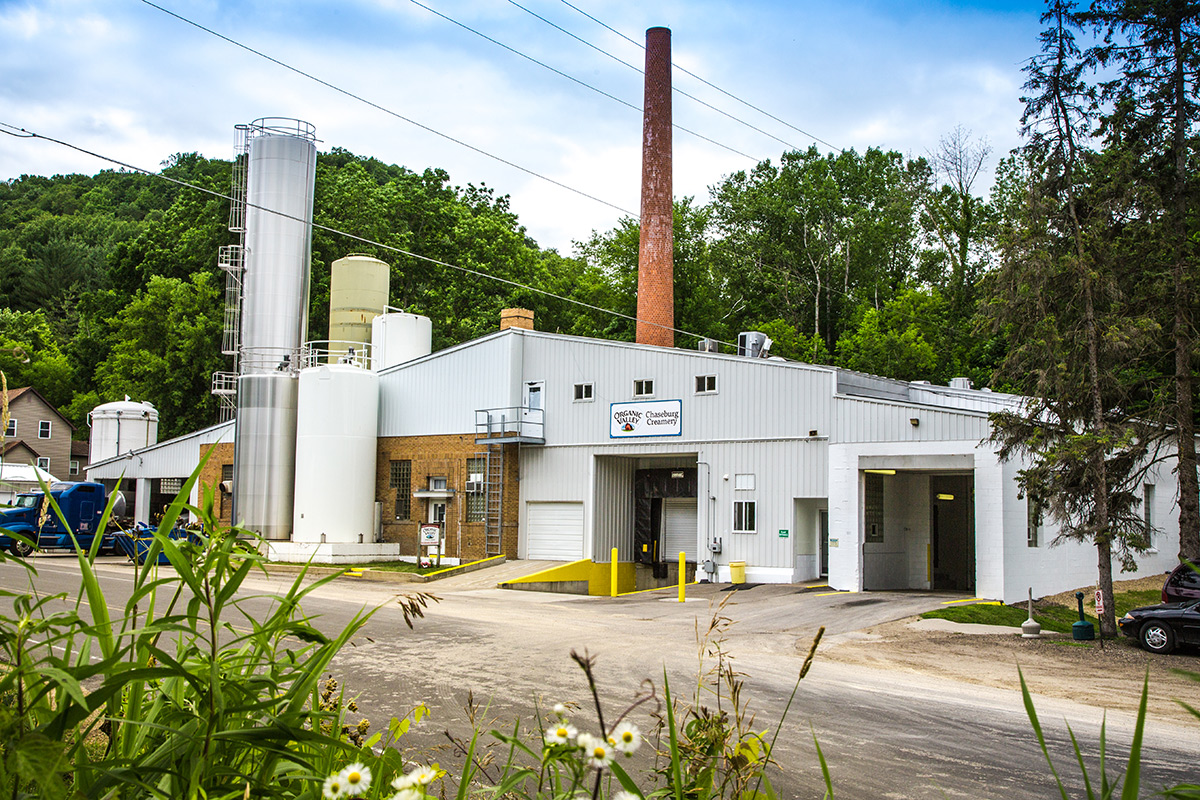 Organic Valley’s Creamery sits on the edge of tiny Chaseburg, Wisconsin, nestled in a valley not far from the Mississippi River.(2015)

The Little Creamery that Could

What’s the secret of this little butter plant that’s taken America by its taste buds? “Employees that care,” says production manager Lambert “Bert” Leis. “We’re small enough that everyone knows each other and they step up and help each other. Everyone here wants to make the best quality [butter] with what we have.”

And what they have is a lot—tanker after tanker of milk from the finest organic, pasture-raised cows. As Bert puts it, a lot of this butter-making magic springs from “well-fed cows” and a huge focus on farm practices that lead to great milk quality, like grazing fresh, green grass, organic farming practices, and tons of time spent outside.

Prior to 1999, Organic Valley butters were churned by a partnering co-op in a nearby small town, but demand for organic butter was pushing that plant beyond its comfort zone, and quality was suffering. Although Organic Valley’s core business tenets include a strategy to avoid investment in brick-and-mortar facilities (instead, prefering to build the business through partnership with existing community production plants), the farmer board of directors knew it was unrealistic to think they could go on forever without at least a few dairy plants of their own. Especially if they wanted to keep such high standards for their excellent butter.

The time was right for a big step.

For decades, Wayne Peters and his wife, Irene, farmed and raised their family near Chaseburg, so he’d come to understand this little community. When it came to securing $750,000 to purchase, renovate, and re-equip the creamery, it was a good thing the community also understood Wayne Peters. He was straightforward and true to his word, and the Bank of Stoddard provided financing for the little creamery mostly on his handshake. Wayne also put his hands—and considerable jackhammer skills—to the remodeling, along with his sons and Organic Valley’s maintenance crew.

Immediate popularity of the butter led to immediate acceleration of the production plan. Louise Hemstead, then chief operations officer, wrote in 2009 that the executive team had hoped in 1999 for a positive cash flow from the plant after two years, but the industrious crew got there in only 5 months! They were churning 25,000 pounds of butter per week in the autumn of 1999, up from their planned 15,000 pounds.

And we should recognize, even though there’s helpful equipment and computers these days, making butter is still backbreaking work. Large machines must be loaded and unloaded with precision. Focusing on cleaning and quality at every moment is taxing, but people are there every day to make it happen. It’s a dance of extreme attention to detail, efficiency, and commitment to quality. 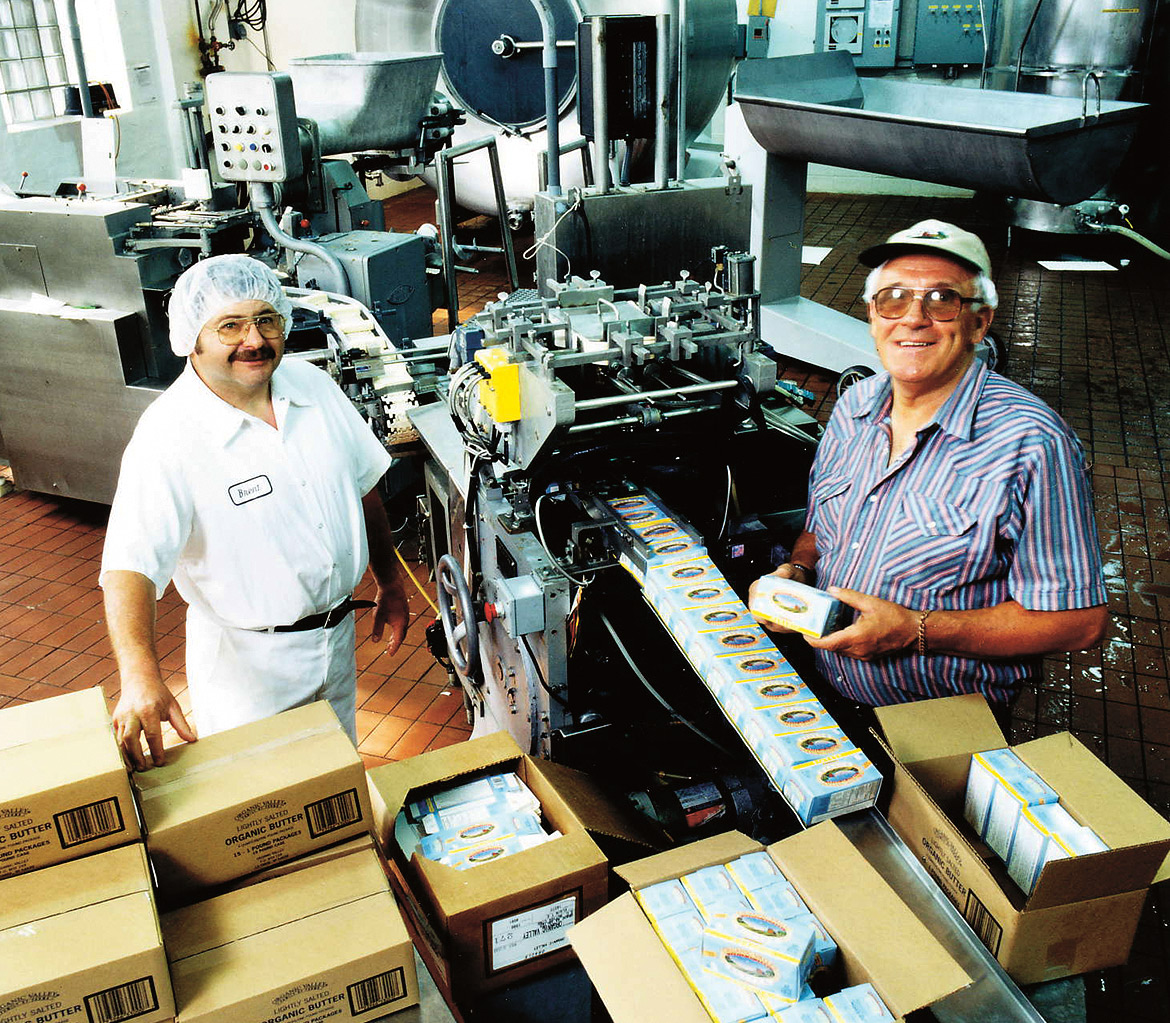 Brent Roiland (L), one of our first buttermakers, and Wayne Peters (R) at the Chaseburg Creamery’s 1999 grand opening.

According to Bert, back when the Chaseburg Creamery first opened, Organic Valley expected to make 5 million pounds of milk* into butter each year. Today, the plant churns that much milk every month.

To keep up, the creamery has seen many physical changes over the years. More and bigger silos, more efficient equipment, computerized processes, and most important—state-of-the-art milk quality testing to ensure the milk is top-notch before it even enters the building.

But it all comes down to the nearly 50 employees who bring so much love and care and hard work to the daily grind…er, churn.

Because they’re working with a perishable product, teams have to be there every day (and night) of the year, including holidays. They switch shifts around so families can be together Christmas and New Year at least every other year, but it’s still a sacrifice, especially for those with young children.

But the group working together here in Chaseburg treat each other like a second family. Bert talks with a lilt of pride in his voice of the many times older workers with grown children have stepped in to take holiday shifts, allowing younger workers that magical time with their kids. “You don’t get those years back,” Bert said.

The best quality milk and an amazing recipe go a long way toward creating multiple-award-winning butter. But the real not-so-secret ingredient for Organic Valley butter is its people. Ask anyone at the plant how they—nestled in the remote valleys of Wisconsin’s Driftless region—make such fabulous butter, and you’ll hear them say, “Because we care.”