A Brief History of Milk

When it comes to inventions and innovations, most make sense on a basic level. After all, human beings always wanted to fly. We’ve always wanted more efficient ways to wash our clothes, cook our food, or communicate with friends and loved ones.

Some things in our lives are a little less obvious, like drinking milk. Just who was the first person who looked at an animal feeding its baby and thought, “Hey, I want some of that”? And more importantly, why?

Milk’s place in society is 10,000 years in the making, so that first question is a little elusive. The second, though, has become clear as milk drinkers today tap into the same things that early dairy-lovers did: nutrition, commerce, culture, and general deliciousness. 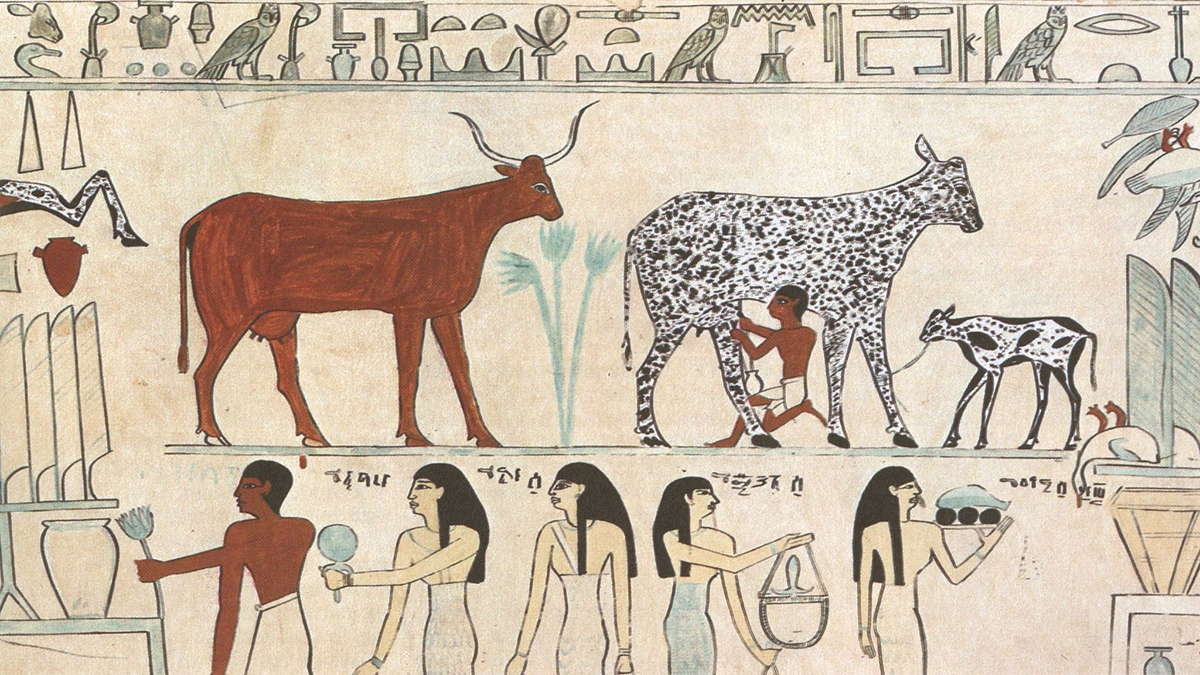 It took the domestication of cattle, following on the heels of sheep and goats, to put the ancient dairy industry into motion and a quirk of genetics to move it along. Dairy got its start in what is now Turkey in about 8,000 BCE, and for reasons of food safety in the days before refrigeration, the first milk from animals was turned into yogurt, cheese, and butter. Then Mother Nature stepped in and changed everything.

As people and cattle migrated, they took with them a genetic mutation that mysteriously began to appear shortly after dairy products were developed—lactose tolerance.

Humans, like all mammals, weren’t built to digest lactose, milk’s natural sugar, beyond childhood. But around 6,000 BCE, the ability for some adult humans to tolerate lactose kicked in and was passed down through people in Europe as well as in parts of Africa and the Middle East. It’s possible adult humans already drank other mammals’ milk because illness was better than death during famine, and infants always needed milk if a mother or wet nurse wasn’t available. As human beings changed and evolved, the foundation of our milk-drinking culture was laid.

That foundation stayed in place for quite some time. Not much changed with milk in the ensuing millennia except more people came to value it for nutrition and flavor, including some of the first American colonists who brought cows across the Atlantic. 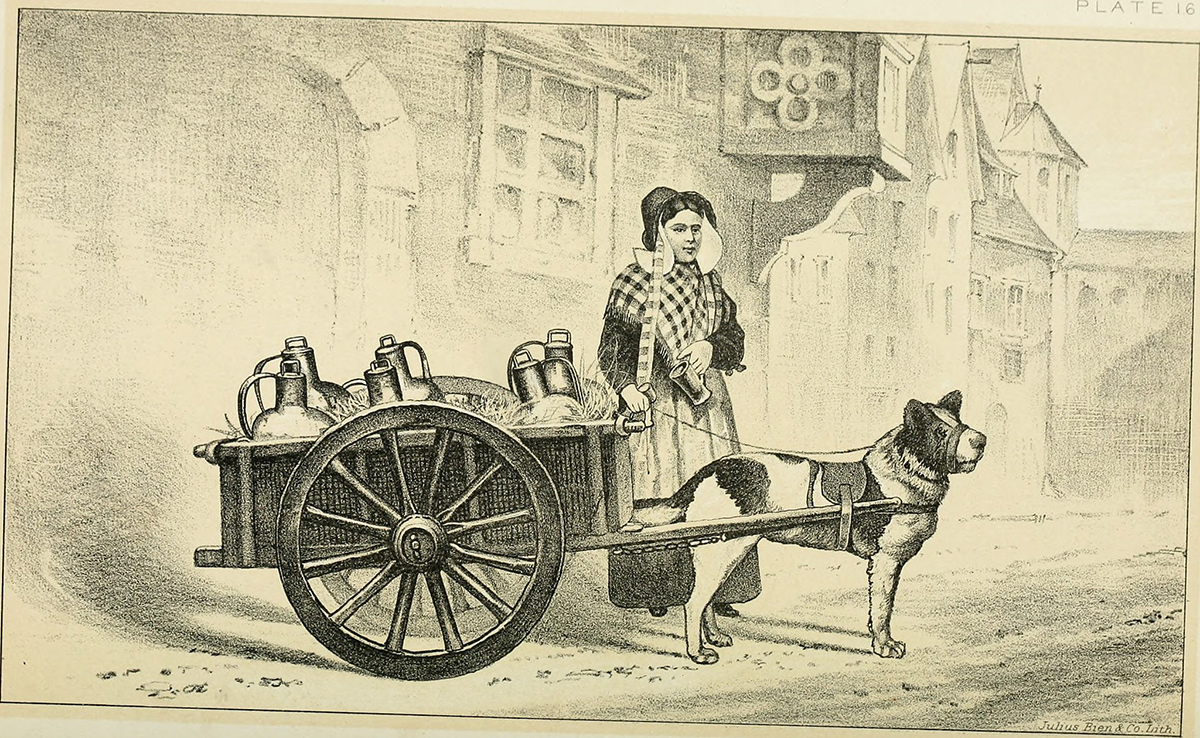 A woodcut image of a woman delivering milk, circa 1887. (Source: Wikimedia Commons)

Throughout the years, milk’s perishable nature kept it close to the farm, quickly consumed as a beverage if not turned into cheese or butter. As the Industrial Revolution created an urban culture and larger-scale production, it also created problems for those who still wanted their milk. Distance and unsanitary urban dairies only exacerbated the risk of disease: Typhoid fever, scarlet fever, tuberculosis, and diphtheria could be transmitted through raw milk.

Pasteurization—the method of destroying harmful bacteria through heat—solved that problem, but it wasn’t an immediate solution. For starters, Louis Pasteur’s 1864 innovation first made its impact on wine and beer. It took 20 years until a German chemist named Frans von Soxhlet proposed applying the process to milk. In 1908, Chicago became the first municipality to require pasteurization for all milk sold. On a state level, Michigan became the first to enact a similar law in 1948. What had been a state-by-state regulation finally became a national standard in 1987. 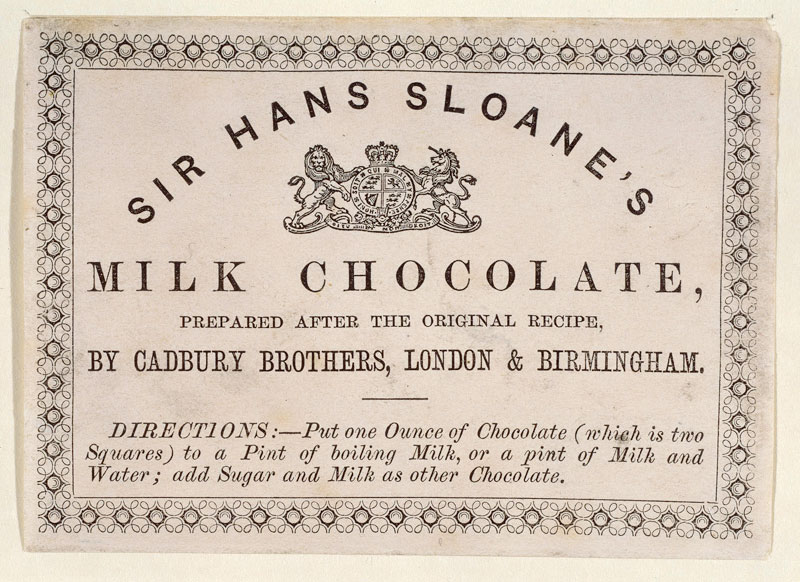 Previous centuries weren’t without innovations beyond pasteurization, however. In fact, one 17th century development created what continues to be a favorite of kids and grownups alike: chocolate milk. In the late 1600s, Irish botanist Hans Sloane traveled to Jamaica, where the locals gave him a drink of cocoa and water. He found it nauseating, and instead added milk and sugar to make it more palatable. While it’s uncertain that he was the first to ever combine milk and chocolate, Sloane brought his recipe back to England where it was manufactured and sold as medicine. 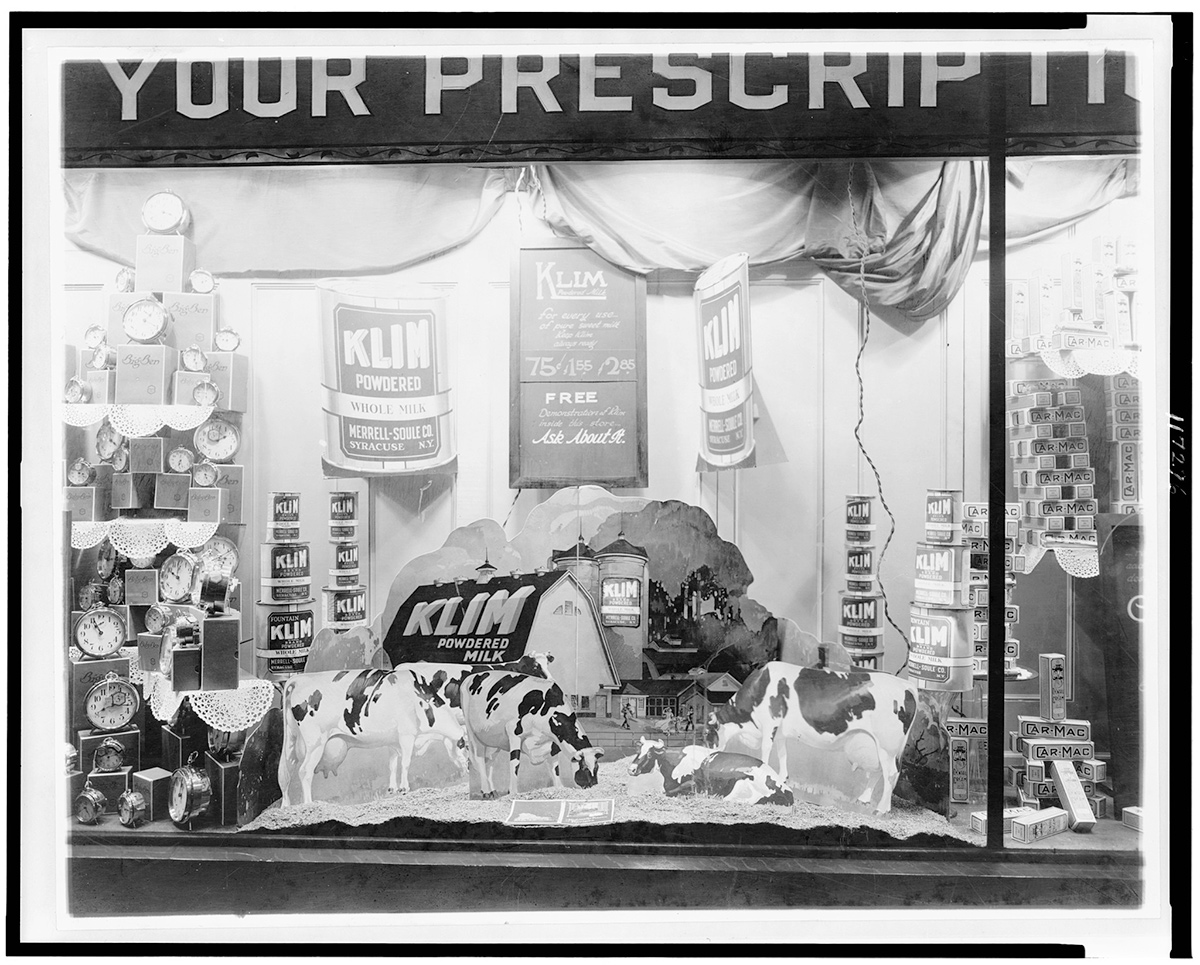 A display of Klim Powdered Milk in a drugstore window in Washington, DC, 1909. (Source: Wikimedia Commons)

By the turn of the 19th century, a Russian scientist had developed the technology to create powdered milk, which retains all of milk’s nutrients at a fraction of its weight. Then and now, this innovation created a nutritious way to give milk portability and extended shelf life, qualities that continue to make powdered milk a common item in U.N. food supplies as well as a choice for hikers and outdoor enthusiasts.

The Civil War sparked further advancement of milk’s role in our diets. Newly invented condensed milk, with 60% of its water removed and sweetener added, became part of the Union Army’s food supply. It was followed in the market shortly after by unsweetened evaporated milk.

Progress in making milk safer and more efficient to produce led to a 20th century full of growth and development that made it the go-to beverage in the American diet. And in the latter part of the century, Organic Valley helped lead the way. 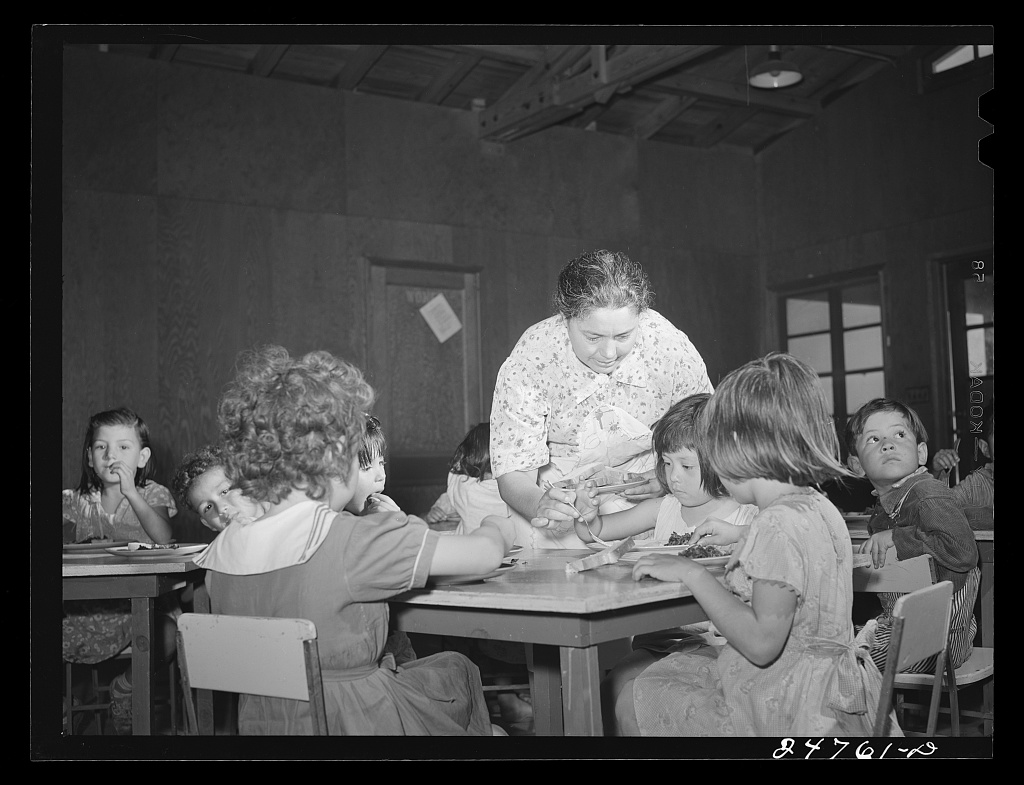 Members of a mothers’ committee serve lunch at a nursery school, 1942.

Once again it was war—World War II in particular—that helped transform milk in the U.S. As soldiers were drafted into service, physicians noticed a pattern of malnutrition in many of the young men who had grown up impoverished during the Depression. In addition, while food rationing was an indelible part of the home effort, milk was not rationed, and consumption jumped. When the war ended, there emerged an ideal solution to address both children’s nutrition and the boon of milk production: school lunches, with milk as part of the meal.

Some cities were already addressing malnutrition with federally supported milk programs that began in 1940. In 1946, President Harry S. Truman signed what is now known as the National School Lunch Act. Eight years later, the Special Milk Program helped bring another 400 million pints of milk into American schools in addition to what had already been part of the school lunch menu. The rules have evolved over the decades, but the end result is that milk in schools is now as familiar as reading, writing, and arithmetic.

Check out our Brief History of School Lunch for more on the evolution of this important program. 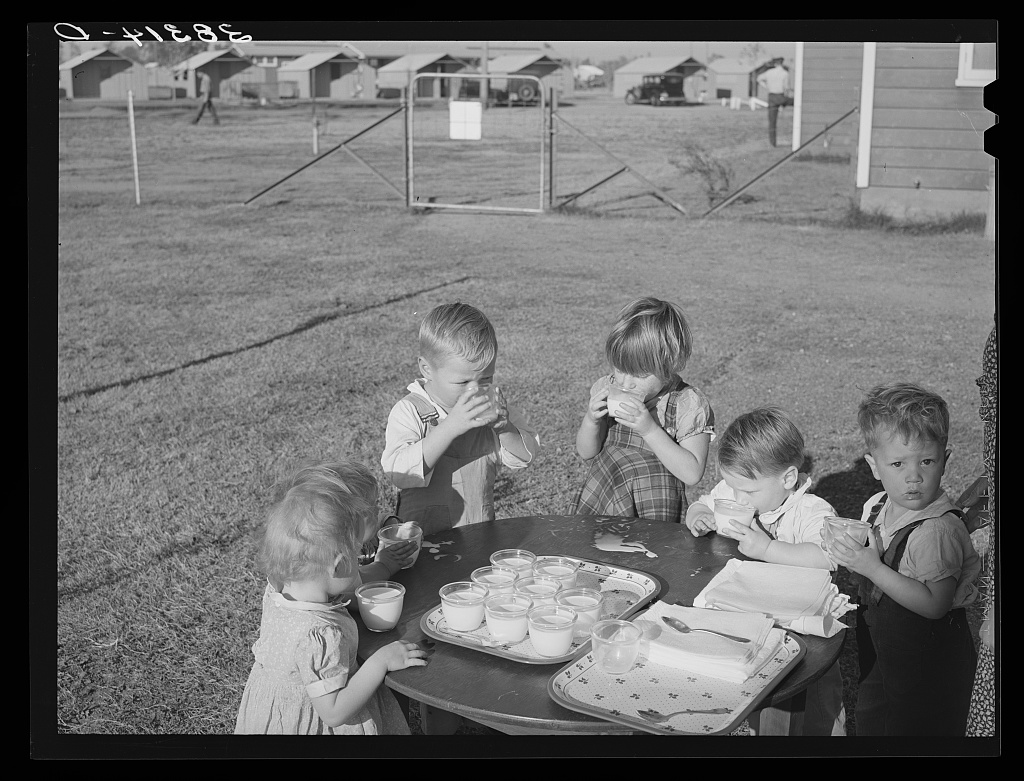 Even with all that innovation, more developments ensured that milk was a smart choice for a healthy diet. Organic farming emerged in the 20th century to counter rapidly changing agricultural practices. Organic Valley was one of a few organic businesses in the ’70s and ’80s that, along with strong consumer voices, motivated the federal government to create national standards for organic farming—the USDA Organic label. That seal was founded on the law that members of Organic Valley helped advise, the Organic Foods Production Act of 1990.

Once the law was in place, in order to call something “organic” now meant meeting strict farming standards, some of which Organic Valley had already been surpassing, such as time on the pasture. Today, Organic Valley cows get an average of 55 percent of their diet from fresh pasture during the grazing season, well beyond the 30 percent required for the USDA Organic label.

There are healthy reasons to make those choices, and science backs it up. Studies show that when cows spend more time on pasture, the cows are happier living the way they’re meant to, their milk tastes better, and provides more nutrition.

Milk’s innovation continues to this day. Of particular note is ultra-filtered milk. With ultra-filtration, milk is mechanically filtered to create a higher concentration of protein while separating and removing some lactose and water. The result is low-sugar, high-protein milk. The technology itself is decades old, developed to treat whey, but it has emerged to create milk that packs a nutritious punch. It’s now allowed for use in cheese production, too.

On the flavor front, it’s no longer just traditional white and chocolate with the occasional guest appearance by strawberry—and milk drinkers are loving the options. One of the top-growing segments of the milk market is flavored milk, and these days that can be any a number of flavors: banana, root beer, “tutti-frutti,” plus more grown-up flavors such as coffee and vanilla, and holiday favorites such as chocolate mint and pumpkin spice.

From pasteurization to powdered milk to ultra-filtered milk to pumpkin spice milk, 6 billion people’s go-to beverage is light years away from its curious beginnings. Much has changed, but one thing remains the same: Milk is a tasty source of nutrition.

After all, if something’s been around for 10,000 years, it must have been a good idea—whoever had it first. 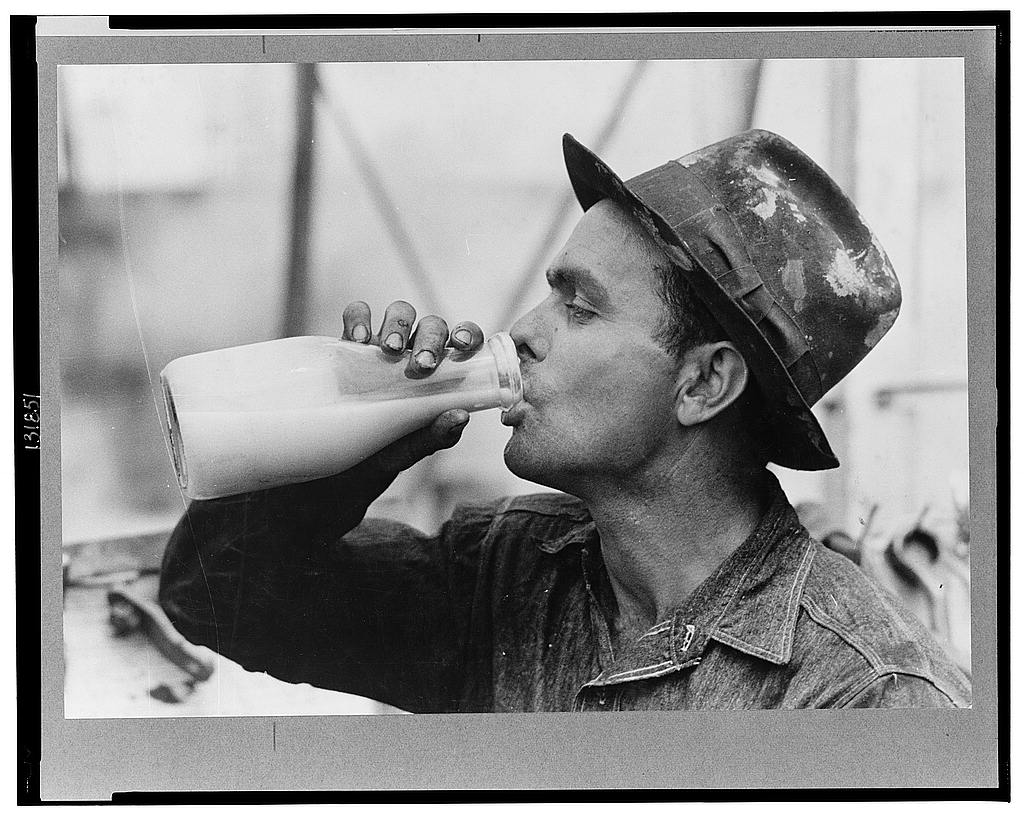 Want to dig deeper into the fascinating history of milk?